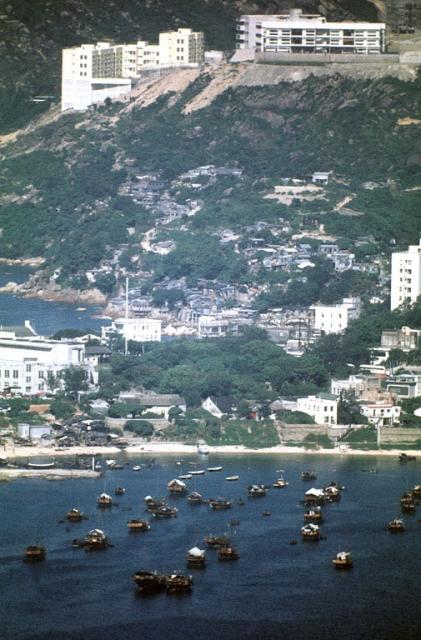 Can anyone identify this location? While going through my own old slides I came across this one which I cannot place. Possibly from 1970 to 1980s. Clues, a double-decker bus appears on the left hand side of the image about a third up which is coloured red and cream and appears to have a KMB logo on the side of the top deck which would appear to discount the Island. Lots of squatter's hut on the hills and what appear to be institutional or government buildings on the top of the hill.

Re: Colour of Buses

I would like to throw some confusion into the mix.

CMB buses doesn't limit to shades of beige and blue.   There was a time they were beige and red.  For CMB buses their beige tops go from below the route indicator window all the way to top.

The shades of red is somewhat different for KMB and they usually went up above the route indicator window.  Some KMB buses has a Red Top, though just covering the top from the window frame upwards.

My first thought was Stanley, but I can't place where.

If on Kowloon side, could it be somewhere along Castle Peak Road? That would have the right mix of beaches and government / army buildings.

Do the slides before & after this one give any clues to where you were?

Re: Location of photo

Yes, the shape of the beach, if we flip it horizontally, looked very similar to Stanley Beach.  But  slope behind did not add up.

A curious one it is.  The rocky shore at the back should also be a clue, but I really have no idea at this stage.  I guess we have to look for other older photos for comparison.

I agree that this is Stanley main beach, but flipped. The Govt buildings could be Ma Hang prison (or whatever was there before hand) and the mast at the bottom would then tally with the Sea cadet school?

How about this? Stanley Main Beach in the foreground, with Stanley Sea School on the shore. Big white building in the right bottom would be St Anne's Catholic Church (built 1959). The bus would be on Tung Tau Wan Rd, between central Stanley and the Prison.

I agree it is Stanley and that I had posted the image in reverse. It was the image's compression by using a long lens that stumped me in identifying the location. From looking at a map I suspect I took it from the catchwater hiking trail above the Tai Tam Road. The trail's high elevation would be about right to get this view. Thanks to all who responded.

You were on the Dragons Back when you took your photo over Tai Tam Bay to Stanley. Here's a snap taken from roughly the same spot last weekend. It's a bit blurred due to being taken with a rather primative telescopic system, a pocket size Canon pointing down one tube of my binos. 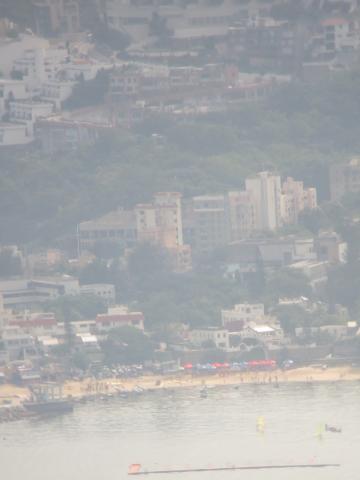 One of the few things that hasn't changed, and serves to confirm this location, is the small, square, white house at the back of the beach about one third from the right edge of the photo, the one with the square windows.

In the mid-distance is Murrey House, standing on the Stanley Bay waterfront, although the water can't be seen in the modern photo, perhaps due to the buildings in the foreground being higher today then they were then.

The same buildings seen at the top of your photo can also be seen in;

I think they're in the Chung Hom Kok area.

There is another possiibilty.  IDJ could be on a low flying plane when he took the picture.

Thank you for the Dragon’s Back location.

It ties in with a few other slides from the same era taken from that trail that I took. These got separated from each other over the years. The others look across the bay to nearly empty reservoirs and a few looking down into Big Wave Bay which were other “puzzle” pictures until I got eventually got re-orientated. The date was probably 1970-72. From recollection, despite being a Sunday we saw no one else on that trail from start to finish. I don't think many people ventured up there at that time. My two Australian hiking companions always chose routes marked on the maps as “seasonally overgrown” and taking that as a challenge. It certainly was on that day. We ended up 'bushed' and in need of more than a few beers at Sheko.

This is definitely Stanley taken from an odd angle. It's either from Tai Tam or from Dragons Back but with an impressive telephoto lens creating foreshortening .

In the foreground is Stanley Main Beach and 'the Reuters House ' in the little enclave of houses still behind the bus terminal. The pitched roof building was there until recent times but is now an empty lot.

Bottom left is the present Sea School jetty
The beach in front is now the home of the windsurfing club.

In the far distance is an early Chung Hom Kok being built above Ma Hang It was to become much bigger before it was demolished in the mid 90's..

The tall building on the far right is Sea & Sky Court that was built in 1961 or 62 and is still there today , so this later than that ,maybe late 60's. I lived in the building from 1976 until 1997......
The shorter white building to it's left I think is the old Government school below Carmel Rd.

The white building in the centre of the picture next to flagpole maybe the old wine factory that was on the corner of Stanley Main St before the HK bank was installed early 80's in the current high rise.

To the left of the flagpole you can see the old police station now a supermarket !

The picture was taken with a 500mm Russian mirror lens I purchased in the Ocean Terminal about 1971. I still have it and occasionally use it. It has given me very good service over the years. Very rugged and survived the heat and humidity of Hong Kong without any deterioration of the lens or mirror, unlike some lenses I have seen. 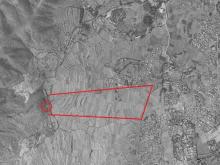