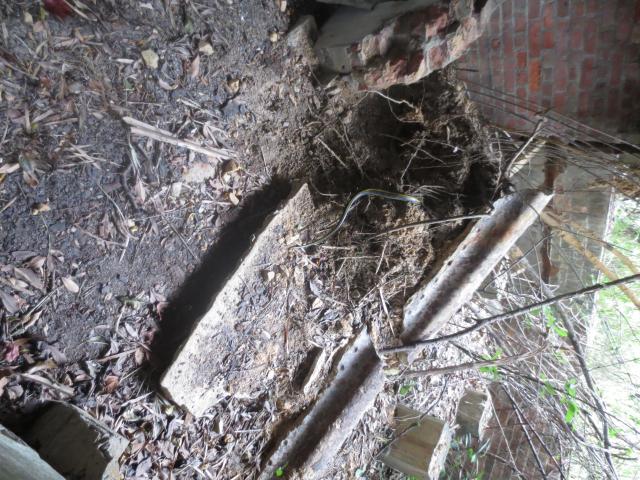 A word of warning to anyone visiting the Lung Fu Shan PF Cells in the near future. Yesterday, 2-11-2013, a large snake had taken up residence inside the second “cell” from the top. Having looked into the building through the hole in its roof just a few minutes earlier, and seeing nothing of concern, I walked in through the door without thinking about the possibility of snakes within. A motion on the floor caught my eye, and there it was just in front of me, a snake about a meter long. Thankfully it was already slithering away towards a pile of debris into which it disappeared. An Indiana Jones moment? A bit similar...but I don’t recall Indy searching his bag for a toilet roll shortly after such incidents! I managed to snap a photo of the snake when about half of it was still visible. At first sight I’d been sure its head and body were all light, bright green in colour, but I was surprised to find that the photo shows it to be striped half black and half yellow/green. If it was all green I suppose it would be a Bamboo Snake, but with yellow/green and black stripes I don’t know. Can anyone identify it?

Now I'm glad I didn't climb in last time I was there! The area around it is very overgrown, but from your photo it looks a lot clearer once you're inside.

There's a database of HK snakes at http://www.biosch.hku.hk/ecology/hkreptiles/snake/ if you want to try identifying it.

Thanks for the link. I can't find a similar looking snake in HKU's photo album, so I've sent them a copy of the photo to see if they can identify it. Will let you know if I get a reply.

I received a very swift reply from HKU’s snake experts. Based only on the photo, they believe the snake may be of the species Orthriophis taeniura. They say it’s not a local snake, but there is, or was, an established population around the Peak, which fits in nicely with the Lung Fu Shan sighting. Apparently it was once, and may still be, popular for human consumption, so its ancestors may have been imported for food, but then escaped into the wild.

They referred me to the second last photo on the following webpage as an example of the species;

The referenced photo shows a snake with quite different markings on its upper body to its striped tail. This explains something that had been confusing me. In the shock of first setting eyes on a large snake at close quarters, I’d naturally focused on its head and upper body, and had a strong and clear impression that it was all the same bright, light green colour. I’d then concentrated on getting a photo, taking my eyes off the snake to look at the camera. By the time the snap was taken the snake had disappeared without me getting another direct look at it. On viewing my photo I was very surprised to see its tail wasn’t light, bright green at all, but striped black and yellow/green, which made me question my memory of its head and neck.

Although the snake in the photo from HKU isn’t exactly the same as the one I saw, I think they’ve got the species correct as it does have a striped tail which is totally different to its head and upper body.

According to various websites Orthriophis taeniura is more commonly known as the Beauty Snake, a type of Rat Snake. It has numerous sub-species and is found in many parts of Asia. Adults are between 1.2m and 2.3m in length, with giants up to 3m. They eat frogs, birds, eggs and rodents and live in a wide range of habitats, including forests, which again fits Lung Fu Shan.

And the answer to the $64 million question? No, they are not poisonous, but they do bite. They are constrictors.

David – Apologies as none of the above really fits an award winning (congrats!), history focused, website. Maybe it can be justified on the grounds that the snake is a resident of a historic building?

Hi GW,I guess snakes are in

I guess snakes are in the back of all our minds when wandering through the undergrowth, so thanks for posting. I'm always happy to read stories of non-posionous snakes!

Yikes, another Indiana Jones moment! For the second time in one week I've had a close encounter with a snake. Last week I nearly stood on a one meter long Beauty Snake at the Lung Fu Shan Position Finding Cells. This week I was checking out the old military structures around Stanley Gap when I was joined by a huge Burmese Python.

I was approaching what looks from a distance like a standard issue WW2 British Army toilet block on the downhill side of the junction of Stanley Gap Road and Chung Hom Kok Road. When I first noticed the snake it was in the low rough close to the junction. Thankfully it totally ignored me and slithered slowly off towards the toilet. I'm not sure if it entered or continued on towards Stanley. I took a photo of it which I've just tried to upload but couldn't as its too "big".

I know Burmese Pythons are not venomous...but neither are rottweilers. Needless to say, after two such incidents in a week I proceeded with extreme caution for the rest of the walk.

The one you met appears to be comparitively small  - they can grow up to 19 feet long with a girth to match !

But in case you're tempted (or try) to put the next one you meet in the pot remember that the Burmese python is a 'protected species' ..... 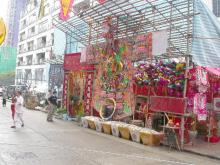