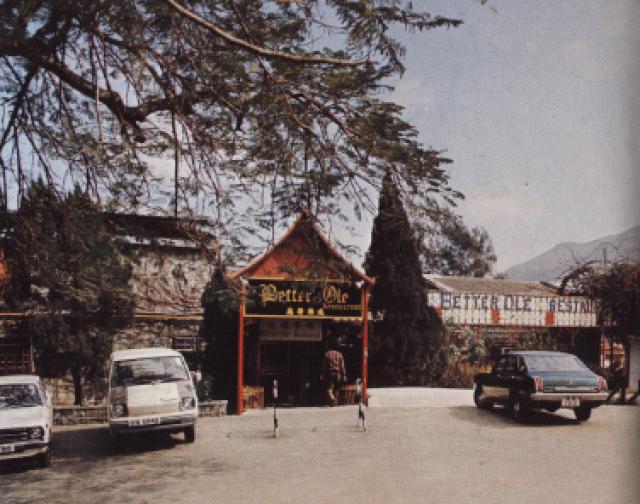 The Better Ole was a favourite watering place for those exploring the northern New Territories, the military from nearby camps and senior civil servants on their mid-week inspection rounds.  Many a congenial afternoon merged into evening here, despite best intentions. A reincarnation of the Better Ole moved to central Tai Po in the 1990s soley as a restaurant. IDJ

it was actually in fanling, just next to the railway station :)

'a quonset hut . picturesquely named and frequented by golfers and gurkhas.  uninspiring but known for its unique bicycle taxis outside,  upon which emerging patrons not in their full senses are seated sidesaddle and peddled round and round until hey become dizzy and fall off, to the considerable applause of the villagers who gather nightly for the show.'

never having frequented the better ole at night missed out on the show but lunched here, chinese chow, on many a sunday :)

the sketch of the building is similar to the photo.  with the nt dialling code 12 dates this post 1972 (it used to be 0).

Pete Moss mentions this place in his memoir "No Babylon" (which, by the way, is an excellent read if anyone is interested).

"...when we dined on chicken curry at the Better 'Ole restaurant in the yard of the Fanling railway station. This curiosity of an eatery - which was the only establishment serving western dishes north of the Kowloon Hills - had been launched by a retired British Sergeant-Major as a whimsical tribute to Old Bill, the cartoon creation of Bruce Bairnsfather, who set his grouchy, mustachioed veteran soldier in the trenches of World War One. The name derived from a classic Old Bill retort to a young recruit, huddled alongside the old-timer in a fox-hole while shells whistled overhead: "If you know of a better 'ole, go to it".

The branch that was in Tai Po on On Chee Road closed down a few years ago.

The unit had been with the gurkas in the hills after illegals thought to be armed. After nearly 3 days of activities myself and the SDU Yorkshire man Ian....? who was returned back to the uk shortly after this, went into 'The Ole' for a meal. We had 2 steak dinners each, followed by a very large 6 person baked alaska desert, all in camo gear with rifles against the table and no one batted an eye. Just like you see in a western on the telly.

I think the big Yorkshiremen who played ruby was Ian Reybold (PI76).  He was in Traffic Kowloon and also a member of the MU.  He was my partner commanding PTU Delta Coy 15th Platoon.  I returned as a PTU HQ Training Staff and he joined the SDU.  He returned to the UK upon completing his first tour.

I remember the place well from the late 1960s and early 70s. It was not far from the Police Tactical Unit, which was where my father was for a time a police instructor. My parents used to take me and my sisters for great slap up meals there. I remember the fillet mignon with a mushroom sauce served with chips. I liked it so much my mother once asked me if I would like a repeat, and I said yes. So she ordered it for me again! I ate it all too. Nice to see that photo of the place again.

We used to visit the Better 'Ole on both my tours in HK, and have many happy memories of times there. Two of these are:

a. Being "dined out" there by Brit and Gurkha colleagues, and following a heart-challenging meal was presented with a silver embellished Nepali rum jar. It was full of what I was assured was Indian rum very much weakened by water. In response I had to reply to the presentation and "yam seng" the rum jar in one series of swallows. This I did, and remember little after getting into the car shortly after to take me back to my MOQ.

b. The second was much more pleasureable, and had nothing to do with a half pint of neat Indian rum. It was a small dinner party for an Army friend whose two daughters were to return to the UK to school the following day. (It was, it would appear, earlier than another posting here mentioning the 'Ole's Baked Alaska) One of the girls wanted that as a pudding, and was told it was only served for two, and so I said that I would also like it. The waiter was delighted, and said that no one had ordered it before, and rushed off.

A while later, with great ceremony, and accompanied by several of the staff, the dish arrived. In the centre of the serving plate was a white rectangular mass, slightly browned on top, with a spreading pool of icecream gently spreading out around the base.

We, of course, expressed our delight, and watched throughout by a couple of the staff, demonstrated our enjoyment by eating all of the sticky melted mass, and then thanking them for a memorable experience. It was indeed memorable, and also, inadvertently, a wonderful one.

And for those who do not know the cartoon that inspired this excellent browsing and sluicing place's name here is a link:-

I shall raise a glass in memory now, to those happy days and a very happy place.

It's strange how a name from decades in the past suddenly conjures up memories! We used to go there sometimes and it was great fun! Thanks for the memory. 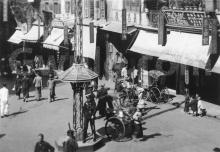