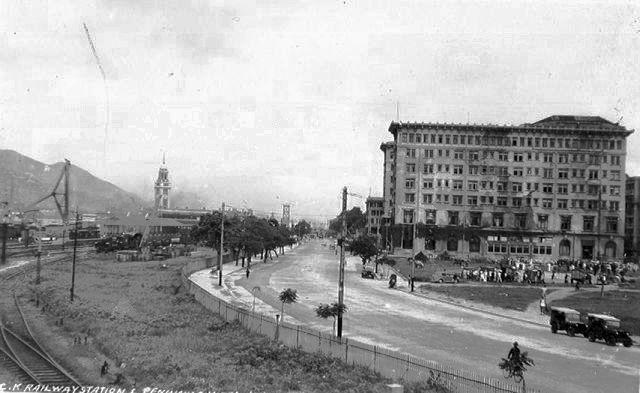 Here is another photo of the Peninsula Hotel which shows up the wartime camouflage colours better. The roofs of the KCR Station also appear to be blotched and darker than normal.

Your linked wartime photo of Arthur Ball's set on Flickr also shows the Pen in camouflage colours immediately after the war. [In Arthur's photo you can see the Japanese had been busy with the camouflage paint. Even the clock tower has been given a coat. MrB]

What's that futuristic-looking round building in Arthur's photo, any ideas? It's a little to the right of the Peninsula, about where Chungking Mansions would be today.

According to the fifth article of this link (http://www.3pforum.com/bbs/thread-4834-1-9.html) in Chinese the site of the current Chungking Mansions had been a market place called the Chungking Market (重慶市場). During the Japanese Occupation the Japanese changed it's name to Chunghing (重興市場) Market so it did not resemble the wartime capital of China, Chungking (重慶)。

I am uncertain whether the description includes the round structure, however.

If translated, the main point of this paragraph described:

The Chungking Building on Nathan Road TST now was once a circular low-rise market place, original called the 'Chungking Market'............

Both the book and the CU document are in Chinese.

Sorry, the link for the index search results might not work. For those interested in the book, here is the entry I found in the Central Library page.

this is a great photo of the

this is a great photo of the the area from the govt website - looks like a building behind chungking mansions replaced it, or maybe they both did. Anyone know what the building behind the old YMCA was?

http://hkclweb.hkpl.gov.hk/hkclr2/object?svc=objrtv&src=CM&itemid=AHH11….. can anyone download this. I can't at the moment

View of TST from HKPL

The photo Sentinel refers to above. Sentinel, nice shot - did the original page give any date?

Probably somewhere in the late 1950's

My estimate is, it might have been taken in the late 1950's. My former employer started out in 1966 in an office in Ocean Terminal. From the photo the Ocean Terminal wasn't there yet.

The Star House is well known to be built by Mr Fok Ying Tung in the early 1960's, but was sold to Hong Kong Land soon after it's completion owing to the difficulties of getting telephone lines installed.

I will check the foundation stone of Star House the next time I go there and see if there are further clues. ie. if there is one. :-)

The picture was taken at an unknown date after 18th March,1957.

You can see the TST-East reclamation is underway in the distance. The 'Mapping Hong Kong' book has an air survey photograph of Kowloon dated 1964. In the survey photo, the reclamation looks to be more complete than in the photo above.

Hi T, Thanks for identifying the building. I'm curious to know how you did it - you're very quick at locating these old photos!

I was just bored in the office yesterday and the BOSS was not around :-P, so I fired up Firefox and try to use Google for some keyword search. I search in Chinese and I think I hit something while using "戰前 +重慶大廈" or similiar combination of other phrases and get those document links I quoted. The rest was just more cross reference with Wiki.......

The aerial photos in the book were taken on or before 1964, as mentioned in the Preface. I just browse page 52 for Tsimshatsui again and found by the time they took that picture, the construction of the Ocean Terminal had already taken place. As for Star House shown in the same photo, it seems they are working on it's foundation and/or the basement. Pity, they do not have the information of the individual photos.

As for TSTE, I remember back in the late sixties/early seventies there had been temporary structures resembling a barrack between Chatham Road and the railroad tracks. Those could be found in the same page. These same temporary metal tube look alike structures could also be seen in Causeway Bay where the Central Library now lies (It used to be the Army's football field).

Aha! I'm missing out on a lot of good information by not reading Chinese. Glad to have some regular visitors like yourself who can help access the Chinese-language information.

The HKPL gives the publishing date of the photo in question as 1963 which would make sense as Chungking Mansions was completed in 1961. The President Hotel (forerunner of the Hyatt) also appears in the photograph.

Another photo from the HKPL archive dated 1961 show that the President Hotel had not been built yet.

To see these photos make an advanced search in the photos collection for:

Regarding the Chungking Arcade, there is an article by Mr. Cheng Po Hung from a Chinese newspaper web site.

Peninsula Hotel is on the left. Some exhibitions of Hong Kong products were held at the right area, where Sheraton Hotel was built in 1970.

The Star and the Rose Hotels can also be seen at the junction of the Middle Road and Nathan Road. Both became the skyscrapers later .

In 1930s, the Chungking Arcade was built beside the Rose Hotel. It was demolished in mid 1950s for building the Chungking Mansion. Since 1930s, the Nathan Road in Tsim Sha Tsui has become the famous tourist area.

A similar photo can also be found in Hedda Morrison's collection taken in 1946 which the Chungking Arcade can actually be seen (the one storey building next to the Rose Hotel on the left) though the round shaped structure is not in the photo.

A street-level view to complement the Hedda Morrison photo mentioned above.

A color photo from the 50s

Thanks for the link to the Chunking arcade photo.

Here is another one which I think from the same batch of photos. The photo shows the Star Theatre (later itt was rebuilt and become Sands Theatre) at Hankow Road and Peking Road.  The TST in the 50s really had the feel of small American town; that weren't too many Chinese signs and shops were very colorful. 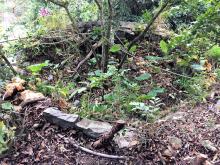