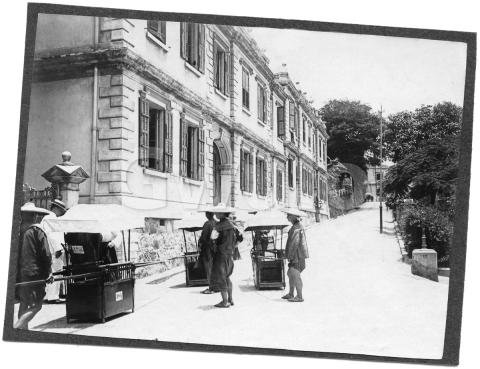 Where: I bought this photo back in 2020 and scanned it straight away so I could take a closer look. There are signs at the top and bottom of the nearest windows showing the street name. The one at the bottom is clearer, and shows we're looking at Caine Road.

I put the picture aside, thinking that at some point I'd go for a walk along Caine Road to see if I could find a viewpoint that matched this scene, and work out the photo's location. Instead, I had a lucky break when a photo of the same buildings popped up as one of Gwulo's Random Photos.

So the older photo shows the start of Caine Road, with Arbuthnot Road leading downhill to the right.

As far as we know they were demolished in the late 1960s or early 1970s. The buildings on this site today belong to the Roman Catholic Church, and its likely that those older buildings belonged to them too.

When: I don't see any obvious clues, but the photo shown below came from the same album and has clues aplenty. We dated it to 1904, which should be roughly when the Caine Road photo was taken.

What: The sedan chairs are the regular style, not the lightweight chairs used for heading up mountains. The most likely journey would be a ride to or from Central, though a visit to Robinson Road or to somewhere further along Caine Road are other possibilities. 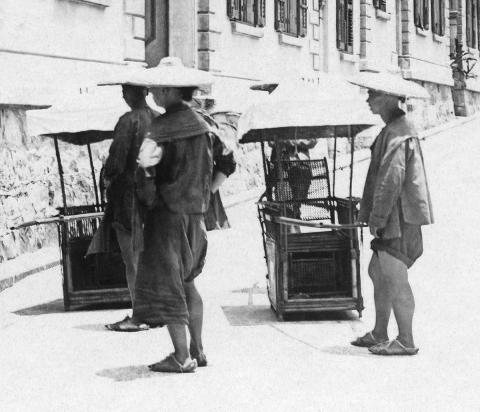 Who: As well as the four men shown above, there are four more people in the crop below. From the left, there's another chair carrier, a man with a straw boater, the second chair carrier with his back to us, and a lady in a skirt. They look to be in conversation, maybe sorting out the payment if they've just arrived, or agreeing the route and rate if they are just setting off. (And as there are three chairs there should be a third passenger - probably the person who is taking the photo.) 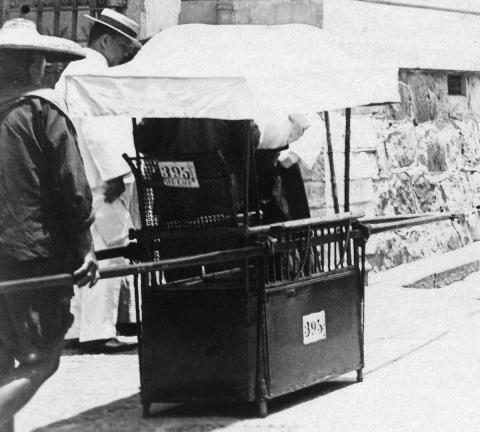 The woman’s fashion of …

The woman’s fashion of “pouter pigeon” blouse with long sleeve widened at the wrist and dark long trumpet skirt dates the fashion to about 1902 as seen here. So the estimate of 1904 seems reasonable.

You can see St Joseph’s building in the 1960s picture.

I have a number of photos of…

I have a number of photos of this area. The first shows the view pre construction of the Cathedral, circa 1880. In the foreground are stables presumably for the house called Glenealy behind them up the hill. The rest of the lot is gardens.

The Second picture form RC Hurleys Diamond Jubilee photo book published in 1897 shows the completed Cathedral. In the foreground are the houses fronting Caine road covered in scaffolding in the final stages of construction giving a completion date of the mid 1890s

The final photo shows the area circa 1935. The large building with the pointed arches is not the St Josephs building which is further up the hill, but rather the Catholic Administration offices for the Cathedral/Diocese. This building replaced the original Glenealy house and  was demolished in the 1960s to construct the current Catholic buildings on the site.

You are right, the last picture you posted clearly shows this. What a beautiful picture, thank you for sharing.