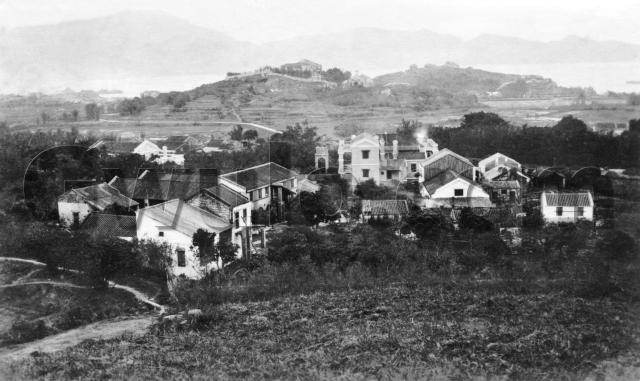 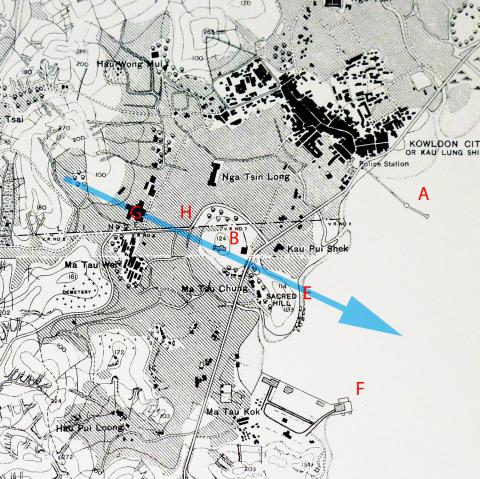 The Blue arrow shows my best guess at where the photographer stood, and the direction he was looking.

The dotted line running left-to-right across the map (between the red H and B) marks the old boundary between British Kowloon and the Chinese land to the north. Today, Boundary Street runs along that line.

The hill marked 'B' is a short distance south-west of today's junction of Prince Edward Road and Argyle Street. 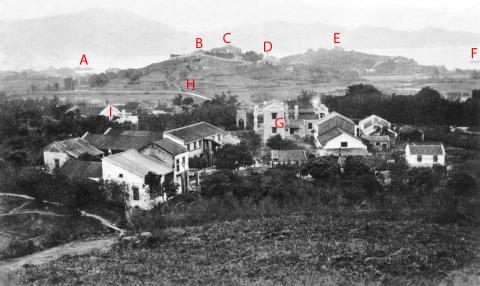 Let's see what we've got:

When: The seller wrote 'circa 1910' on the back of this photo. I don't see anything to contradict that, but if you do, please leave a comment below.

Who: There isn't anyone to be seen, but I wonder who lived in the two new buildings, G and I.

Were they the original local landowners, upgrading their houses? Or new arrivals, living far away from the town center to get cheaper land? Or maybe they were connected with the church or school in the distance?

If you can tell us any more about what we're looking at, please let us know in the comments below.

Under Para 12.9 of Impact Summary of the above Report:

This is a great photo of early Kowloon!  I see V. R. No. 5 to 8 on the map.  Were these boundary stones between Kowloon and New Territories?

David, Thanks for your excellent sharing of this district.

Looking at the 1903 map, and extending the dotted boundary line to the west of the G, one would come to a hill marked 180 ft in hight. That hill would in April 1928 be bought by the De La Salle Brothers to build La Salle College. The hill would be partially cut down / flattened to make land for the school building (which was 70 steps from the later cut Boundary Street) and the soccer field would be another 30 or so steps from the school building level. So the playing field was a good 100 steps above Boundary Street level.

The valley and vegetation just at the left end of the photo after the hill would become La Salle Road in the mid 1930s, after the school was completed in 1932.

Worth noting, even though not seen in your map is the plot of land immediately west of the valley, which is current day La Salle Primary School's plot. According to my findings from La Salle College’s documents:

"Across what was later on to become 'La Salle Road' was a garden lot of some three acres which Brother Aimar had acquired from Mrs. Chan Kwing Min, the wife of the former Waichow war-lord; there was a small Chinese house on the grounds, in which the Canadian Sisters of Our Lady of the Angels, newly arrived in the Colony, resided temporarily. There was not a single house standing on the southern side of Prince Edward Road."

This plot was bought by the De La Salle Brothers slightly earlier, in 1927.

At first I wondered if the church you mentioned may have anything to do with the Canadian Sisters, but the description from the school said the Sisters had newly arrived (I guess in 1920s) so they could have been a bit too late to be of impact or service to the structures in your photos.

I’d also like to share an excerpt of a speech I found delivered by Bishop Mrg Valtorta, on the occasion of the blessing of St. Teresa's Church on 18 December 1932, located less than a mile from the west tip of this map.

"In these last few years, a new town, I might say, a new city and a new society has come to existence where we now stand. Not many years ago, I took my country walks here, from Kowloon City to Sham Shui Po. I still remember the hills, the Swamps, a brook, a Chinese pagoda, everything has disappeared as if by a magic touch, and has given place to a modern city."

I have not heard of the Victoria Girl's School before, so if anyone could shed light on this school and its future, it would be appreciated.

Moddsey, thanks for the link to the extra photos.

Their description of Photo A contradicts what I have written. Photo A is titled "The Sacred Hill from the West, 1898", and has the text "To the left, the northern hill (B on our photo) shows the church and missionary buildings (D and C on our photo) built there in about 1890."

I'm not sure which description is correct.

Mark, thanks for the extra background about this area.

Thanks David.  I guess the line marked by the stones was no longer the Sino-British boundary after 1898, so their status was changed to "V. R.".

The Holy Trinity Church was allegedly built on the site of the tomb of a Song Dynasty princess (the sister of the two emperors who stayed in Hong Kong as a result of Mongol invasion).  The princess drowned and the body was never recovered, so a statue made of gold was buried in the tomb which was therefore known as "Mrs. Gold's tomb".

Due to Sung Wong Toi's historical significance, the hill and ajacent area became reserved for public use on 15 August 1898.

Views of the same area 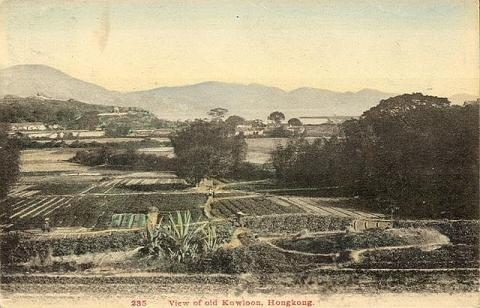 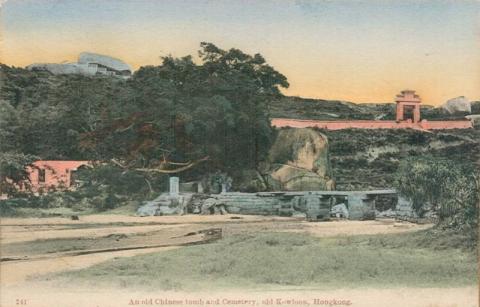 David, I have a feeling that the "Victoria Girls School" you mentioned could be "half" of the fore-runner of Heep Yun School, the Victoria Home and Orphanage, a Church Mission Society establishment.  See the school's history on Wiki: http://en.wikipedia.org/wiki/Heep_Yunn_School#History

Mark, you are right! Here's what I found about the Victoria Home and Orphanage.

These War Department Maps, 8 inches to the mile, are available in a set of 21 from the Lands Department (Ref HD) and show (double dotted lines) "Chinese Roads about 4 feet wide and mostly paved"; the ancient Boulder Trackways or roads pre-dating the British, the oldest man made constructions surviving in Hong Kong and STILL not classified as Monuments: https://sites.google.com/site/hongkongbouldertrackways

What has happened to the Victoria Regina (VR) boundary marker in the road between Victoria and Gharb, St. Lawrence? These VR rectangular stone slabs were built during British rule in Malta, in the time of Queen Victoria. Their aim was to serve as boundary markers, indicating that the land behind them was government property. These boundary markers, which were quite common in our islands, have now almost disappeared, sometimes not only accidentally but even purposely stolen. The VR marker, in an exceptionally good condition, placed midway the road connecting Victoria to Gharb and St. Lawrence, has very recently disappeared during the massive construction works currently carried out on this artery. This is shameful – another precious loss to our ever dwindling national heritage! 06.09.2006 P.R.O. Stephanie Jean Coppini

We still have some of these left in Hong Kong I hope??

Guy, Thanks for the help tracking down their meaning.

I don't think any along the old Kowloon boundary would have survived, given all the re-development along that area.

If the boundary between the New Territories and Chinese land was also marked out with V.R. stones, there's a chance some of those might have survived, as the closed area remains relatively undeveloped.

The boundary stones between the New Territories and the Mainland do survive as shown: http://gwulo.com/node/6193

Re: Anglo-Chinese Boundary Stone No 5

If I'm not mistaken stone no. 5 is relocated to the History Museum for display.

I can see the concrete barrier surrounding the Song Wong Tai rock. It means this photo must be taken after 1915,

Thanks HF, I hadn't heard that before, it's a good trick to know.

Taken from form the hill behind Kowloon Dairy

You can see the main barn, the back of Albert Villa and Kowloon Diary building.

re: Taken from form the hill behind Kowloon Dairy

Thanks Annelise, I've wondered what these buildings were for a long time, so it is great to have them identified.

Annelise uploaded a couple of other photos that confirmed the identification.

We're seeing it from the back, but if you stood in front of it you'd see this:

Then if you look below the letter H ...

... there's a building with a sloping stucture in the middle. Turns out that is the main barn:

The distinctive barn is to…

The distinctive barn is to the left of “G” 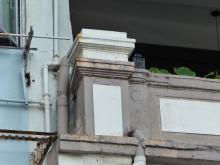