On my recent UK trip, I also made sure to visit The National Archives (TNA) at Kew. Covid's affects on travel meant it had been over two years since my previous visit, so I was looking forward to it.

Let's take a look at this visit's discoveries.

Mr Monia Talan was a member of Z Force during the fighting in 1941, a group formed to conduct sabotage and intelligence work behind enemy lines in the case of a Japanese attack on Hong Kong. He seemed like an interesting man to learn more about, and TNA's catalogue lists two documents that mention him.

The catalogue record doesn't give any further information so it needed a visit to take a look at the original file. Here's what you get, a protective wrapper with a file inside that has all the original paperwork on this topic. 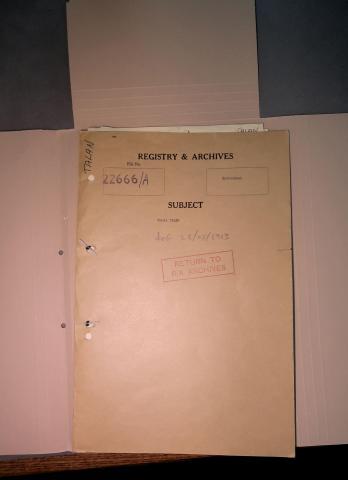 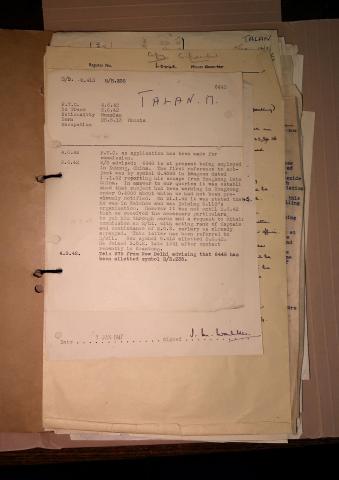 Much of this correspondence covers his difficulties in becoming a British Citizen, and is rather depressing to read.

After the British surrender in Hong Kong, Talan escaped into China, and spent the rest of the war as a member of Force 136. In November 1945 he was moved back to Hong Kong and served there until his demob in mid-1946.

He was Russian by birth, but in 1939 he'd applied to become a naturalised British citizen. That application was interrupted by the war, so he'd asked for, and been promised verbally, that after demob he'd be given transport to the UK where he could finally get the naturalisation sorted out.

But then there were new rules and regulations, and changes in personnel, leading to those promises being broken. The file ends with two letters dated 1946 from Talan's senior officers trying to get the powers-that-be to be flexible and support the man who had served in the British Army under dangerous circumstances, e.g. John Keswick wrote to Major General Festing, in charge of Hong Kong Land Forces:

I have known Talan for a number of years and saw a certain amount of him when I was associated during 1942 and 1943 with Force 136. In my opinion his work during the war and his long association with the British in Hongkong, fully justify the British Government giving him British papers.

If you are writing to London and require someone to vouch for Talan I am prepared to do this, not only because I feel that he is qualified for British papers, but also because an injustice appears to have been done to him in that his case should have been dealt with earlier.

The file has a few more notes but no conclusive decision on his request for transport and naturalisation. Let's see if the second, later document has any answers:

Though the reference is for a single sheet, you're given a much larger item, a bound collection of all the naturalisation certificates received from around the British Empire at a given time ... 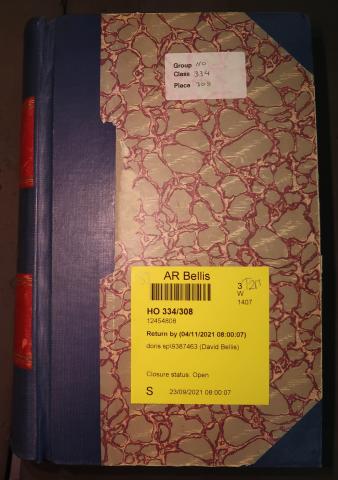 ... including the one for Monia Talan: 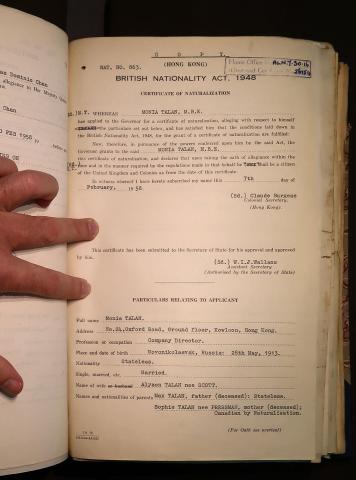 So he did eventually become a British citizen, but look at the date: 1958!

His efforts to become naturalised in 1946 must have led to nothing. I wouldn't be surprised if it took several years before he felt any enthusiasm to try again.

I wrote about naturalisation certificates back in 2017, after a previous visit to TNA. That time I'd looked at the certificates from 1939 & 40, which included ten stateless Russians, people with similar backgrounds to Talan.

By 1958 the list of new British citizens from Hong Kong has quite a different mix. The vast majority (48) were of Chinese background, then just one each of Russian (Talan), Polish, German, Rumanian, and Portuguese.

... the cerificate also asks the question: why did this person want to change their country of citizenship? It's not a step to be taken lightly ...

The same question came to mind as I leafed through these later certificates.

Checking in for the BA flight from Hong Kong to London I'd been surprised how big the queue was, and how much luggage everyone had. There weren't as many passengers as it first looked - there were a lot of friends and family seeing people off - but still when I got on board the plane it was 80-90% full. On the flight back it was very different with just 10-15% of seats occupied. I guess that part of the difference in numbers was accounted for by people taking up the offer of British visas for BNO holders.

Perhaps some future visitor to the TNA will see my fellow-passengers' names in the list of naturalisation certificates from the 2020s?

I'd originally noted the two references below when I was looking for information about William Chan. I later realised that any information was more likely to be in the case notes held in Hong Kong, but thought I'd still take a look.

The first file records the discussion shortly after the Japanese surrender about how to handle suspected Japanese war criminals, but not any information about the crimes or the people involved.

The second file has a lot more information, gathering the reports written by people who saw or received ill-treatment from the Japanese soldiers. Most were written by members of the British armed forces.

As you'd imagine, the war crimes documents make for grim reading, so I was glad to turn to these reports on escapes from Hong Kong. They cover the escapes made by three naval officers:

This file was kindly recommended to me by Elizabeth Ride, and is available to read at:

Arguing with China about Kowloon City

This visit's files weren't all about the WW2 - I'd seen this reference and hoped it would include some interesting maps of Kowloon:

No maps though, just a folder of correspondence from 1933.

The Hong Kong government had announced that residents of Kowloon City were going to be evicted to make space for a new public park. The residents got in touch with the Chinese government, who on 28 June 1933 notified the British government that under the convention of 1898, the walled city was still under Chinese control, and so the British had no right to be evicting anyone.

"It is at the same time agreed that within the City of Kowloon the Chinese Officials now stationed there shall continue to exercise jurisdiction except so far as may be inconsistent with the military requirements for the defense of Hong Kong. Within the remainder of the newly-leased territory Great Britain shall have sole jurisdiction."

The correspondence between the people involved on the British side showed they had different opinions on whether or not Britain should go ahead with the evictions. One author referred to the text quoted above, but another believed it was overruled by a telegram sent to the Chinese side on 30 May 1899:

"After the recent experience which they have had not only of the worthlessness of the protection extended by the Chinese garrison at Kowloon, but of the additional danger involved in its presence, it is impossible for His Majesty's Government to allow the resumption of Chinese authority within the Walls of that city."

Frustratingly, the file doesn't note any final decision. I'm not aware of any public park being built there in the 1930s though, so I guess the project was quietly shelved. (The public park would eventually get built, just much later. The present-day Kowloon Walled City Park was created on the site of the old walled city in the 1990s.)

I didn't find any maps or plans in that Kowloon City file, but I did have better luck with several other files. We'll take a look at those in the next newsletter.

P.S. TNA's documents always have interesting surprises in store, but TNA is also just a very satisfying place to visit. TNA store literally millions of documents. They're continuously adding to the collection, which at their last reckoning occupies over 185 km of shelving! Documents can be ordered in advance so they're waiting for you on arrival, and despite the size of the collection, additional orders are soon ready to view. The viewing rooms have plenty of lights, camera stands, supports, and all the various weighted bags & strings that make it easy to view and photograph the old documents. As you can probably tell, I'm a fan!

I am Monia Talan's son Michael Talan. We live in Bundaberg Qld Australia . I have been intrested in seeing what was in Monia Talan's file. we all moved to Australia December 1978. However, Monia never became a naturalised Australian, when his British passport ran out he flew to Canberra and marched in with his MBE citation with him and procceed to inform the British Embassy that he was a British citizen with a MBE and needed his passport renewed which they did.

Another story he told me was when he was in London during the war or it could have been at the end of the war, apparently non-british soldiers of the British Army had to report to a police station every couple of days. Anway, he walked into a police station to report and the police SGT saw him and told him as he was an British Army officer he was to come in the front door and not to use the rear entrance.