When complete, this chronology will include a description of every USAAF mission flown over Hong Kong, Canton, San Chau, and Macau from 1942 to 1945.  Missions of all sizes are included, so one-plane recon missions are included along with missions flown by dozens of heavy bombers.  I have only included missions that I could verify through U.S. military documents.  In the future, I hope to add missions flown by the U.S. Navy over Hong Kong and the Pearl River delta as well as Japanese missions flown over Hong Kong in December 1941.  Many of the missions chronicled here in this series are described in greater detail in my book: Bold Venture: The American Bombing of Japanese-Occupied Hong Kong, 1942-1945.

If you have any questions or wish to add information about a particular day's raid, please go to the page for that day and leave a comment there. If I have not yet created a page for that day, please follow the instructions under "3. Add pages" at http://gwulo.com/node/10937 to add one.  If you have general information / questions about air raids over the PRD, please leave a comment below.

Each of the entries I have provided in this series follows the format below.  Note that I have generally chosen to use wartime spellings (for example, “Kweilin” rather than “Guilin) and that I refer to Japanese aircraft by their Japanese names, not their Allied codenames—for example, “Ki-43-II Hayabusa,” not “Oscar.”

OBJECTIVE: Describes the primary goal of the mission.  Often aircraft on missions to bomb Hong Kong or Canton had to divert to secondary targets due to cloud cover and other factors.  In addition, aircraft flying sea sweeps over the South China Sea that failed to locate Japanese ships sometimes bombed Hong Kong as a secondary target.  When a target other than the primary objective was attacked, I specify this.

TIME OVER TARGET: Gives the approximate time of the air strike.  Sources often provide conflicting times for raids, due in part to the fact that American mission reports and other documents did not always use Hong Kong local time.

AMERICAN UNITS AND AIRCRAFT: Lists the number/type of aircraft involved and their squadrons, plus the parent units—for example, “Three B-25s from the 11th Bomb Squadron (341st Medium Bomb Group, 14th Air Force).”  Aircraft totals reflect the number of planes over the target and do not include aircraft that aborted the mission for mechanical or other reasons.

AMERICAN PILOTS AND AIRCREW: Lists the names of airmen who are known to have flown the mission.  U.S. military documents often did not list the names of individual pilots and aircrew who flew on a mission, so in many cases I have only been able to provide partial lists of the airmen involved.  Note that I list the rank held by pilots at the time they flew the mission.

RESULTS: Describes the damage inflicted by the air strike as reported by American pilots and other sources.  When other sources contradict American claims, I note this discrepancy and try to estimate the most likely result of the raid.

JAPANESE UNITS, AIRCRAFT, AND PILOTS: Lists any Japanese aircraft and air groups (sentai) that intercepted the air strike, plus the names of Japanese pilots if known.  This information should be considered tentative, as I do not have access to mission reports and similar documents from the Japanese Army Air Force (JAAF).  I look forward to posts from Gwulo readers who can fill in the gaps in our knowledge of JAAF fighter units over southern China.

AIRCRAFT LOSSES: Describes aircraft and aircrew lost during the air strike and the cause of these losses.  Listings of American losses are accurate, since they are based on American military documents.  However, Japanese aircraft and aircrew losses are more tentative due to the lack of corroborating Japanese military documents and the tendency of American pilots to overestimate the number of enemy aircraft they had shot down.

SOURCES: I based all descriptions of air raids on American military documents that I read while conducting research in the archives at the Air Force Historical Research Agency at Maxwell Air Force Base in Montgomery, Alabama.  However, I have relied on other sources as well.  For Japanese fighter units in China and pilot losses, Japanese Army Fighter Aces, 1931-45, by Ikuhiko Hata, Yasuho Izawa, and Christopher Shores was an indispensable source.  For the full names of American fighter pilots, I often referred to Carl Molesworth's Sharks over China: The 23rd Fighter Group in World War II.  For details on the Chinese American Composite Wing, I consulted Molesworth's Wing to Wing: Air Combat in China, 1943-45.  For sinkings of Japanese merchant and naval vessels I consulted various sources, particularly The Imperial Japanese Navy in World War Two: A Graphic Presentation of the Japanese Naval Organization and List of Combatant and Non-Combatant Vessels Lost or Damaged in the War from the Military History Section of the General Headquarters of the U.S. Far East Command in 1952.  For a list of additional pertinent sources, please see the bibliography of my book, Bold Venture: The American Bombing of Japanese-Occupied Hong Kong, 1942-1945.

OBJECTIVE: The objective of the first American air raid on Canton is to bomb Japanese aircraft on the ground at Tien Ho airfield

AMERICAN UNITS AND AIRCRAFT: Four B-25s from the 11th Bomb Squadron (341st Medium Bomb Group, 10th Air Force) and four P-40s from the American Volunteer Group (AVG).  This is the final mission flown by the AVG, which has become famous as the “Flying Tigers” under the command of Col. Claire…

END_OF_DOCUMENT_TOKEN_TO_BE_REPLACED

Does anyone know which of the

Does anyone know which of the air raids hit Zetland Hall? 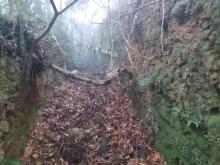