The Norwegian community in Hong Kong before the Japanese attack on December 8, 1945 consisted of a small number of residents and sailors from the merchant fleet. Here is a brief outline of their war time experiences.

Before the Japanese attack and occupation

All the central Norwegian ships agents had representations in Hong Kong: Thoresen & Co, Bruusgaard Kiostergard, Karsten Larssen & Co and others. Managers and their families were long time residents in Hong Kong, many lived at the Peak.

The Christian-Buddhist Mission at Tao Fong Shan (Sha Tin) was run by the families Reichelt and Thelle.

Being an important trade harbour, many ships belonging to Nortraship (the Norwegian Shipping and Shipping Mission) regularly stopped in Hong Kong.

Some Norwegian residents volunteered to the HKVDC (Hong Kong Volunteer Defence Corps) in 1940 and 1941 to prepare for the defence of the Colony in case of a Japanese attack. Alfred Fløisand, born in Bergen, was the only casualty dying from gun shot wounds at Stanley December 25 1941. He rests at Stanley Military Cemetery in Hong Kong. Other 6 volunteers were sent to Sham Shui Po prisoner of war camp: Nils Wennech Smeby, Kåre Semmelmann, Johan Johnsen, Birger Næss, Lars Ongstad and Ragnvald Reiertsen.

As Norway was not formally at war with Japan, but with its allied Germany, the Norwegians were given status as third nationals and semi-enemies. They were summoned to the Foreign Affairs section in Goverment Building on April 11,1942 and all passports were stamped.

A Norwegian War Time Relief Committee was set up to provide help and assistance to the Norwegians in Hong Kong.

Two of the Norwegians escaped in early February 1943. A few weeks later the Japanese decided to send the Norwegians to Stanley Civilian Internment Camp. Persons above 60 years and the missionaries were excluded.

In the beginning of 1943 two of our men escaped from the Colony. We were all summoned by the Japanese authorities, expecting we would get a reprimand at most. There were enough rumours going around, as is normal in times like this. The news  therefore came as lightning from a blue sky. The Japanese said they would do as they had threatened to do: send all Norwegians to internment at Stanley, where the British and Americans already had been interned. Approximately 45 Norwegians were to be sent to Stanley. The Norwegians having more than 60 years and, strangely enough, the Norwegian priests with families, were excepted.

They all came to the appointment on time.They were called by name and had to return the passports the Japanese had previously given them. They then got on the bus that was to take them to Stanley. I had given a big Norwegian flag to them, and the fellow I gave it to said with military precision: "It will be hoisted at Stanley at 3 pm". If it was, I don't know. I just know that when they all had entered the bus, the same fellow starts to sing "Gud signe vårt dyre fedreland" (the official national psalm, not the national anthem), and they all sang along. This caused a stir in the street, and from the big Hong Kong & Shanghai Banking Corporation building the Japanese leaned out of the windows. Shortly after, since the bus still had not departed and there was enough time, they all sang "Ja, vi elsker" (the national anthem). The street was filled with song, both from the bus and from us bystanders, even a Portuguese lady in the crowd sang along. Then the bus engine started and the Norwegians were sent to the Internment Camp at Stanley. The street was so empty and quiet, and also our little colony here was now in silence. Our Church had been destroyed by bombs a long time ago. Our house had been taken by the Japanese. And now, even our little congregation had been taken away."

Approximately 40 Norwegians were sent to Stanley in 1943. Some Norwegian families had voluntarily gone to Stanley with the British, American and Dutch in January 1942, so the total number of Norwegians at Stanley were 46.

The Norwegians were mainly placed in the Dutch Block, along with the Dutch.

Some of the Norwegians took jobs while waiting for the repatriation. Some left Hong Kong on the Smiters in late September, while others left on Empress of Australia in August.

The "Waichow Intelligence Summary #20, 23 Feb 1943" has a good summary of the Norwegians in Hong Kong at that time. 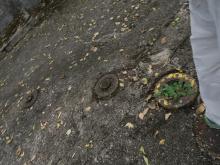