Morrison Hall was a hostel providing accommodation for students at the nearby Hong Kong University. It was established by the London Missionary Society.

We can follow initial work on the site through the Public Works Department's annual reports:

Further details come from the History page of the Morrison Hall website:

The last phase is described in StephenD's comments below and "The Legend of Christian Missionaries and the Church of Christ in China":

(A new Morrison Hall was built near the Flora Ho Sports Centre, and opened in 2005.)

It's not clear when this building was demolished. The current building on the site, Wisdom Court, was completed in 1985, so it would be some time before that. 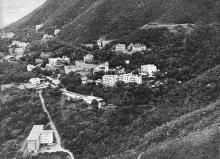 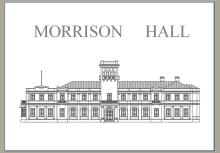 If we're to speak of a "first generation", should the Morrisonian Institute (established in his honour) which features in the 1846 work of Lieut. L.G. Heath of H.M.S. Iris be considered a precursor?  Where was it exactly?  Heath has it adjacent to the "Medical Mission Hospital" and a short distance from "Matheson's Opium Store" in what looks like vaguely the HK U site.

The hall's website notes that old Morrisonians didn't want to see the university's second oldest hall name disappear, campaigning to get a new hall built as of 1997, with the new hall opening as David's timeline shows, in 2005.

Post-1968 the building was handed over by the LMS to the HK Council of the Church of Christ in China for conversion into a youth leadership centre (SCMP, 25.11.1968, p.8). It was reopened as Morrison House in 1969 (SCMP, 2.6.1969, p.7). The last mention I can find for it still operating is in February 1978 (the last of a series of annual youth leadership meetings addressed by Ken Topley, then Director of Education), after which nothing. The shock here is that I'd begun teaching at HKU in September 1974 and, evidently, despite regular walks into HKU along Conduit Path from our flat in Bisney Rd, I missed altogether the destruction of an historic building. No wonder so much of HK's heritage was zapped - too many (like me) were oblivious when not being so would have mattered.

One of the most interesting tales of the building's early years has to do with its first warden, Rev Herbert Richmond Wells, a fascinating Australian missionary, born in Geelong and christened there on 25th May 1863. He first arrived in China in 1887 with the American Bible Society, later being temporarily employed by the London Missionary Society before joining them permanently in 1894. Until 1903 he was stationed successivly in Guangzhou and what was then called Poklo and is today Boluo County (博罗县) on the East River.

It's almost impossible swiftly to summarise his remarkable career in religious life, education and New Territories life in the time between his arrival in HK in 1903 and his death, run down by a tram on Des Voeux Rd in March 1950. (His very full and fulsome obit can be read at "Death Of Rev. H. R. Wells: Struck Down By Tramcar", South China Morning Post Mar 17, 1950, p.8).

Among other institutions, he taught at Queen's College, was connected with the re-establishment of Ying Wa College in 1911 and a few years later with the young University of Hong Kong, as noted above, as the first warden of Morrison Hall. in 1926 he was awarded the OBE “for services in the cause of education in Hong Kong”. He had been appointed to the Government's Board of Examiners (in the Chinese language) in 1901 where he had got to know Sir Cecil Clementi (Governor 1925-1930), since Clementi too was appointed an examiner in Chinese language in 1902. Wells was still an adviser to University of Hong Kong’s new Faculty of Chinese in 1930, after his retirement as a missionary.

He helped establish the Hong Kong & New Territories Evangelization Society and was active in the Hop Yat, Wanchai and Shing Kwong Churches, and in Union Church. His long service as pastor in charge of the Hong Kong & New Territories Evangelisation Society’s churches in the New Territories, from Tai O in Lantau to Yuen Long, Tsuen Wan and Taipo, had culminated in his appointment as the London Missionary Society’s Senior Missionary in 1926, a post from which he finally retired in 1929. More interesting to my line of research, he was a noted supporter for years of the only indigenous HK Chinese attempt to emulate the western style missions to seamen, the Chinese Christian Mission to Seamen, founded by the Hainanese/Singaporean/British Rev. Tan Bockjock (I've never found his name in Chinese) in 1933, which struggled on, never really lifting off, until 1971.

Wells was on the committee of Nethersole Hospital. He led the founding of the New Territories Agricltural Society (which had annual shows, in 1927 and again in 1928 in the gardens of Sir Robert and Lady Ho Tung’s Sheung Shui villa (now the Lady Ho Tung Welfare Centre, having been gifted to the government for that use in 1934): both were on the Reverend Wells’ organizing committee) until, I think after the war (someone may remember better detail).

During WW2 Wells and his second wife, Florence (I have no details of Florence J Wells, save her name, and don't know when they married or where) were both interned in Stanley, where he was noted for having continued to give Cantonese lessons to fellow internees throughout because was a fluent Cantonese speaker and, as noted, also literate in Chinese.

His abilities as a Chinese linguist led to what was probably his longest lived memorial, his several basic Cantonese language teaching books including Cantonese for everyone: a simple introduction to Cantonese (1929); The Book of Changes and Genesis (English and Chinese) (1930); Commercial conversations in Cantonese and English (1931); Chinese official documents and petitions (1931); An English-Cantonese Dictionary (1931); Gods, ghosts, devils: stories of Chinese life and beliefs (trans) (1935) and in Chinese 訂正粤音指南 (Ding zheng Yue yin zhi nan (Cantonese pronunciation guide)) (1930). (I owe my understanding of H.R. Wells’ long career in Hong Kong to discussions with HKU's Dr Peter Cunich.) Throughout the 1930s his Cantonese lessons were a regular feature on RTHK's predecessor, ZBW.

Both Wells and his first wife Mary, who had died aged 39 in 1903, are buried at Happy Valley. After his death, Well's second wife, two sons and three daughters subsequently lived in Britain, where Mrs Wells died, aged 83, in Sevenoaks in 1953.

Wow, fabulous information and I want to steal it for WP, to be honest!  Back to my plea, anyone able to establish whether the Hall was build on the site of the Institute?

Geographically there would seem to be no connection at all. The connection otherwise is solely via the London Missionary Society, which seems to have been given the lease on the Hatton Road site on which Morrison Hall (later Morrison House) was built under its aegis, with financing it organized and which, accordingly, provided the warden. By the by, chasing up the query about sites, I stumbled on this brief history (http://www.hkcccc.org/Eng/Article/PDF/201306GSsDesk.pdf) which says that Morrison Hall/Morrison House stood until 1981 - which makes its destruction even more shocking.

The Morrison Educational Society School (which I am assuming either housed, or was an alternative name for the Morrisonian Institute) was down on Morrison Hill, on the border lands (!) between Wanchai and what was briefly known as Bowrington. Collinson's 1845 Ordnance map (http://maps.nls.uk/view/102621571) shows three buildings on the top of the hill. If Heath's labelling is correct, the largest, easternmost building was the school with what was probably something like a cookhouse or servants quarters behind it to the south, and the medical mission hospital building the westernmost.

I haven't a clue as to the answer, but if you look at the CENSUS OF THE BRITISH EMPIRE. 1901: REPORT WITH SUMMARY AND DETAILED TABLES FOR THE SEVERAL COLONIES, &c, AREA, HOUSES, AND POPULATION; ALSO
POPULATION CLASSIFIED BY AGES, CONDITION AS TO MARRIAGE, OCCUPATIONS, BIRTHPLACES, RELIGIONS, DEGREES OF EDUCATION, AND INFIRMITIES, London: HMSO, 1908, p.lii (Roman numerals 52), you will see that 'Morrisonian' is understood as one of a large variety of sectarian designators. As far as I can work it out, the Morrisonians were an evangelical sect (aka Arminians) of the Scottish presbyterian church that emerged sometime in the mid-19th century. What its relationship was to Robert Morrison is obscure, but my hunch is that Lt Heath was conflating a British metropolitan designator with the world of Hong Kong that he was sketching, using his labels, not those then current in Hong Kong.

re: Morrison Hall and Morrisonian Institute

Stephen, thanks very much for all the extra information. I've updated the timeline.

The link should show the marker on an 1845 map with "Morrison's Institution", and the nearby hospital visible.

Robert Morrison After All

Thanks enormously for this fascinating information.

I asked Christina Lo (Site Manager of current Morrison Hall) about some dates. She gave the following ones:

After the war, Morrison Hall was reopened on 9th December 1948.

These photos from the Eleanor Mitchell collection show a look-alike building under construction in the same era:

A photo of the completed building can be found here: