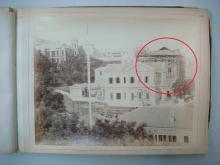 Pre-WW2 this was the campus for St Paul's College. After WW2 they moved to their current campus on Bonham Road.

The building is currently known as The Bishop's House.

There is also the Bishops Lodge House at 25 Lugard Road on the Peak - occupied by the Bishop (Joseph Charles Hoare circa 1899) I believe.

It was eventually sold on to Robert Ho Tung.

Did HK have an Anglican and RC Bishop concurrently?

Bishop's House during the Japanese occupation

Brian provides the following extracts from The Banknote That Never Was by Francis Braun:

Braun was a Hungarian who lived in the Bishop's House in 1942 - he says it's in 'Lower Albert Road, in a lovely wooded area'.

There were a great many nationalaties in the Bishop's House, almost all of them swept together by the storm of the war: Danes, Norwegians, Russians, Chinese, Austrians, Germans, and a Hungarian. There was an old American from the Tao Fong Shan Mission, an American female pianist, a Filipina lady caught in the midst of her world tour and even a member of the Red Cross, who was later interned as well, because of his British nationality.

The Bishop's House was managed by Mrs. I. Klein, her husband a medical doctor who died during the war, and a Dr Hart, an Austrian, connected with the church...

Our British friends and the American pianist were moved on the fifth of January 1942 (to Stanley) and we 'friendly enemies' were on our own.

There wasn't much time to settle in because a few days after the exodus of our friends four Japanese officers and their batmen were billetted with us. They did not mix with us nor did they interfere with the management of the house...

There was amongst us a Scandinavian Salvation Army woman, a Mrs. M. Ackerholm, who used to work in Korea.

Braun goes on to tell how one of the Japanese batman risked his life to steal some clothes and provisions for Mrs. Ackerholm.

There's also 'a Chinese layman' living there, and perhaps others unnamed.

The House is searched by Gendarmes looking for arms in the middle of the night.

There's a chapel there and one day Braun is standing in the entrance and he's mistaken for the Reverend Rose, who he rseembles physically. He leaves the House some time in 1943 to live with an elderly German couple.

I was fortunate to visit the Bishop's House on Apirl 9 through a special visit organized by RAS HK (the building is not normally open to the public).  The building is well located on a hill at the corner of Lower Albert Road and originally had fine views of HK Harbor.  Today the buiding sits on a larger site which is a component of the Hong Kong Sheng Kung Hui compound, and the Bishop's House today appears to be solely used to house and accomodate 3 Hong Kong Sheung Kung Hui staff for the Sheng Kung Hui Archives with collections from the Anglican-Episcopal Church in China and Hong Kong.

Bishop's House is a graded I building in Hong Kong, and is one of the oldest western buildings in HK, Flagstaff House being the oldest (1846?).  The building, highly altered today, was first constructed circs 1848 as a boys school, and then later alted with additions in 1851 in the "collegiate style" or modified Tudor Revival style and it housed St. Paul's College and also became the residence of the first appointed Anglican Bishop of Hong Kong with classrooms, a library, dormitories and the residence of the Bishop.  The two-story building has a granite base/basement and an octagonal tower athe north-east corner.  Architectural details include oriel windows, flat and pointed windows, label mouldings over the window buttresses, quoins, and red-painted Chinses clay tile gable roof.  The building originally was said to feature open verandah's on the facades.

The building appears to be in very poor condition today, the second floor has had severe structural problems and therefore it is not used; a bamboo scaffolding inside a portion of the first floor appears to hold up the second floor.  Additionally there appears to be major water infiltration issues with both rising and falling damp.  We were told that there are currently no plans to address the building's poor condition.  The larger site has approvals for major alterations including the demolition of the adjacent and currently vacant Central Hospital Building - but there does not seem to be much going on here presently and it is distressing to see little to no concern for the poor condition of this significant and historic building in Hong Kong.

St. Paul's College, situated in Albert Road close to the Glenealy Ravine, dates back to the early days in the History of the Colony and is principally devoted to the education of the better class Chinese youth with a view to their becoming useful as interpreters in the Government Service. It has long been under the control of the local Protestant Missionary Bishop, hence little is known as to its working or its progressive results. 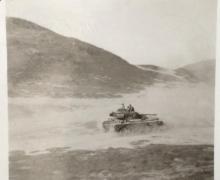