Yesterday I read this:

The Japanese Naval Garage, where we were employed as armed guards, had once been the Gloucester Hotel Garage. This was situated about 100 yards up Wong Nei Chung Road, generally called Gap Road. This road then continued winding over the hills past several cemeteries of different religions. The upper main entrance of the garage was on the road and the lower entrance to the workshop was next to the Muslim Cemetery.

I think he's muddling up Gap Road too. That was the old name for the last stretch of Queen's Road from Kennedy Road down to Morrison Hill Road. 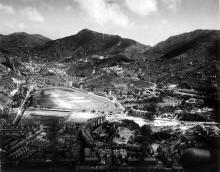 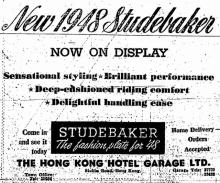 The construction of the Hong Kong Hotel Garage appears in the HK Telegraph dated 19 January 1924. Situated at the junction of Morrison Hill and Stubbs Road, the garage comprised two stories, the ground and first floors were accessible by a new 25 ft road opposite The Monument whilst the second floor was accessible from Stubbs Road. I guess the location would be close to where the present AIA building is today.

Here's the text of the article Moddsey mentioned above. It's on page 7 of the newspaper:

Building operations are now well in hand on the new garage of the Hongkong Hotel, situated at the junction of Morrison Hill and Stubbs' Road. When completed. this building will be easily the finest of its kind in the Colony, offering to motorists every requirement in the way of service and providing for the Hotel motor department a garage more in keeping with the high place it occupies in the Colony’s motoring circles.

Built of reinforced concrete and being fireproof throughout, the building will consist of a ground floor, with first and second floors, the total floor space being approximately 35,000 sq. ft. This will provide not only room for upwards of 150 cars, but also repair shops and offices. The ground floor, which will be approached by a new 25-ft. road from opposite the Monument, will have storage room for 57 cars, there being petrol and oil tanks, together with washing-down space. It is proposed to keep this floor almost exclusively for the Hotel's own garage cars.

The first floor will be approached by the same roadway us the ground floor, a 12-ft. ramp running up the side of the building on to the first floor. The whole of this floor will be given over to workshops, and will contain a plating shop, machine shop, vulcanising shop, as well as shops for painters, upholsterers and carpenters. There will be room for 20 cars to be under repair at one time, as well as 12 cars in the paint shop, which will be enclosed to make it free from dust and specially heated to ensure proper drying.

The second floor will have an entrance off Stubbs Road and will be used for private storage only, for which there have been some applications already. There will be private lock-up boxes fitted with collapsible iron gates, this ensuring to the private owner the same exclusiveness he would have if he owned his own garage. On the same floor will be pro-, vided private workshops where, owners will be able to carry out their own repairs. Cars will be; parked on either side of a wide central fairway, leaving plenty of room for any one car to draw out without interfering with another. On the same floor will be the general offices, together with a showroom and stores of parts and accessories.

Ail cars going to the garage for oil or petrol will fill up under cover of a glass roof projecting front the building and the general convenience and arrangement of the building has been well-studied. From the basement to the roof it  will be over 100 ft. high, it is 232 ft. long and its width varies from 48 ft. to 84 ft. Work has been in progress for about two months, and it is estimated that it will take another 18 months to complete. When opened and in full working swing the garage will undoubtedly prove to be one of the most useful in the Colony. It is at an important road junction and all cars proceeding from the city to either the Peak, Repulse Bay or Shaukiwan will pass its doors. So far as the site is concerned it is one which has been admirably chosen and one which is being developed to its fullest possible extent.

A large advertisement in the HK Telegraph dated 16 May 1925 announced the opening of the Hong Kong Hotel Garage in June. 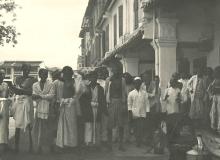