The position is approximate. It is marked on a 1924 map, but I'm not sure who ran it or what type of illnesses it treated. It may have been connected with the Tung Wah Plague Hospital, which was on the adjacent plot of land. 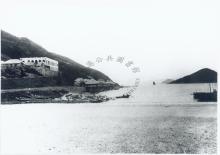 Governnment Notification 162 in April 1889 requests tenders for "drainage works at Kennedytown Police Station".  It's not clear if that is just preparing a site. or the building is already standing.

The Report for the Year 1892 from the Public Works Office notes that "The following new buildings were completed in 1891. The Civil Hospital Coolie Quarters, Lunatic Asylum for Chinese, Police Stations at Aberdeen, Kennedy Town and Quarry Bay, and the District School Saiyingpun, the maintenance and repair of which therefore became chargeable during the past year to this vote."

Next is the Public Works report for the first half of 1894, with a longer section about bubonic plague:

40.Special Work caused by the Outbreak of Bubonic Plague. – Cemeteries for the burial of Chinese victims were opened at Kennedy Town west of the Police Station, and at Sandy Bay.

A special cemetery for European victims was made in an isolated position inside the area of the existing Public Cemetery. (C.S.O.1335/1894)

Two matshed hospitals were erected: one near the Glass Works, and the other on the eastern side of the Kennedy Town Police Station. (C.S.O.1399/1894)

A temporary depot for cattle was constructed upon Marine lot 126, C.S.O1425/1894, in order that the existing Cattle Depot might be made available for hospital purposes if necessary.

Brick walls were constructed across certain streets in Tai-Ping-Shan, in order to wall in the depopulated area. (C.S.O.1472 – 1894)

25. The hospitals at present in existence are:

Next is a report from the Medical Committee in May 1895, which ends:

We would further beg to suggest that the Kennedy Town Police Station be permanently reserved as Hospital for the reception of infectious or contagious diseases, when the Hygeia is full or when it is undesirable to remove patients across the water.

Their interest is expanded on in The Acting Colonial Surgeon's Report for 1895:

This building was handed over to the Department in April, 1895, and is a most valuable adjunct for the treatment of persons suffering from infectious disease.

It is situated at the extreme western limits of the City and, consists of one two-storied block containing accommodation for 36 patients together with attendant's room, office and dispensary within the premises and approached by a covered way are situated the necessary kitchen, stores, mortuary and out-offices. The concreted yard surrounding the buildings provide suitable sites for the erection of temporary matsheds which, during the prevalence of epidemics, will be found most useful.

There were 5 cases of small-pox treated there during the year, one of which that of a man who was admitted in a moribund condition terminated fatally 3 hours after admission.

There were in addition 40 patients admitted to this Hospital during the year, 31 of these proved to be bubonic plague, the remaining 9 were removed to this hospital under observation.

In addition to the foregoing cases treated at the Kennedy Town Hospital 20 patients suffering from small-pox were treated here, 3 of which terminated fatally. The fatal cases with those of Chinese foundlings who had not been vaccinated.

2 cases of cholera removed from H.M.S.Rainbow were treated during the year, neither cases ended fatally.

The hospital ship was maintained during the year in a satisfactory condition.

A new Police Station was also built at Kennedy Town and the Police occupied it on the 1st of October. (see http://gwulo.com/node/17733)

So it looks like the Police never got their building back after 1895.

The square building is originally a glass factory built in 1870s. It was used as temporary infectious disease hospital in 1894. It was re-opened in 1899. Sir Blake laid the foundation stone for the hospital in 15th Nov 1901. It was re-opened for smallpox patients as Western Brach of TungWahHospital in 1907. Government gave the land for building three buildings in 19 Sept 1908. TungWahSmallpoxHospital was established in 21 Oct 1908 with three buildings, gate erected and opened in 1910. It was reconstructed into WesternLeprosyHospital in 1938 but broken down by Japanese in 1941. The area became squatter area after war. It was developed into residential area and park in 1980s. (From: Illustrating Hong Kong Historic Buildings 1898-1919)

I have sent the photo of the Kennedy Police Station to you for your interest.

Re: Police Station and Glassworks

The 1889 PWD Report confirmed that the Police Station had been completed.

The Glassworks and Ropeworks were below the level of the Police Station and the lots were separated by Davis Street.

It is quite difficult to

It is quite difficult to justify the square building is Kennedy Police Station or not because of it appearance in a rural area.

But the building style of the Kennedy Town Police shown in the link is 100% police station:

Report of the Colonial Surgeon 1895

Report of the Colonial Surgeon 17 August 1895 as shown here

" During the year the Kennedytown (sic) Police Barracks was handed over temporarily to the Medical Department and ultimately was taken over permanently as an Epidemic Hospital. Its retention as such was strongly recommended by a number of people who knew little or nothing about it, whilst those who knew most were not consulted in the matter at all.  It is most satisfactory to know that this Police 'white elephant' has been ultimately made 'passable' as an infectious hospital at some considerable cost. Whether it will be seriously required (as a Police Barracks), I doubt very much. During the winter months, it makes a pleasant country residence for some of the Police Force, who previously had no use for the building - so it was said.

Kennedytown Barracks proved a faily good hospital, but its proximity to the trees on Mount Davis made it a hunting ground for flies and mosquitoes which sometimes added greatly to our patients' sufferings. The arrangements of the rooms also left much to be desired."

It might be a police barracks rather than police station or factory considering the size and factory chimney.

Here's a map from 1889 that clarifies the locations of the original Police Station, the Glass Works, and the Rope Works: 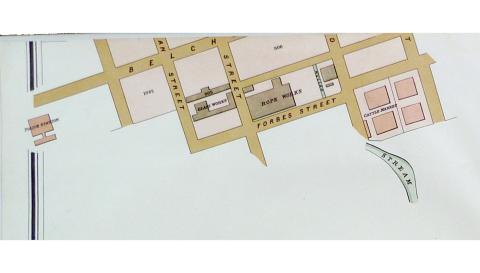 Thanks David for the map. It clarifies that the primary information given in the HKGRO is correct. 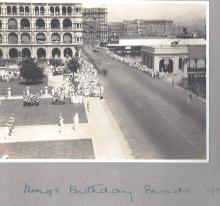