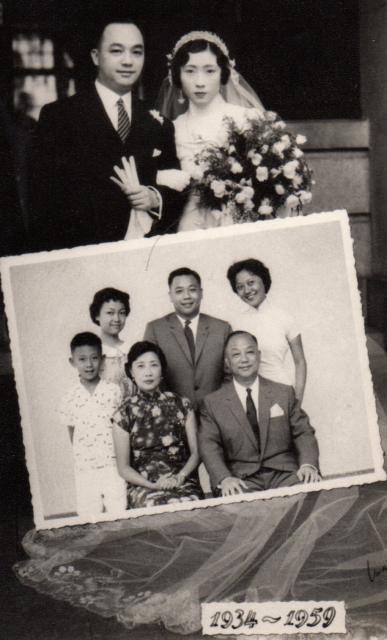 Any suggestions as to people in this picture would be welcome.

Any other clues - eg photo studio name - on the photo?

Or any guesses how they might be connected to your family?

If they got married at say 25 years old, that would have them born around 1909.

Think this pic is connected to my family. One of a pile of unidentified pictures. Some must be 100 years old by now and not worth scanning because of their condition.

This one interests me because it is reasonably recent and the family is Chinese. As I think I mentioned there were a number of Chinese young men who lived with my family in London in the 1920s while they studied at university. I understand they mainly studied law. This person may be one of them and the children pictured may know something of that.

Still looking for any info about my great grandmother Ching Ah Fung and hopeful that somebody somewhere - perhaps in this picture - may be able to give me a lead.

You've probably already surmised that the date on the pic suggests that the bottom photo shows the couple in the top photo on their 25th wedding anniversary. Their wedding attire is Western, which suggets some level of sophistication (at least in the Western sense) modernity and wealth for that period, and what little of the building we see in the background suggests a substantial modern structure, possibly a public building like city hall. That's about it really.

I am almost certain that the gentleman sitting on the right of the photo is Kwan Cho-yiu, the lawyer and Legislative Councillor. Certainly looks like him.

And married in 1934, so really must be him. Well spotted.

Thanks to all for the help.

It is CY Kwan  I am sure. This is how he was known to my family. He lived with them in London when he studied law in the 1920s. I assume this is his 25th wedding anniversary picture.

The children would be well established now. I know that CY died a few years ago but anybody got any idea where the children are especially what seems to be the eldest son who is at the rear of the photo. Suspect he would be in his late 60s by now.

I wonder if anybody can point me in his direction. Did he follow his father into the law? The family firm no longer exists I have checked that. I knew of them because they handled the probate on my grandfather's Will in HK in  the early 1950s. He held the last Olson property and business interests in HK. Phik has done some wonderful research on some land that was donated to St Christopher's Home for Boys and the loss of a plaque commemorating my grandmother.

Would really appreciate any leads the Gwulo community might be able to give me.

Perhaps one of our readers can see CY Kwan's son's name mentioned in the obituaries.

Another possible route would be to contact the DBS Old Boys Association, explaining your connection and asking if CY's son is an old boy.

Thanks for your suggestions and links. Have tried the school several times and got no reply. As for the obits I am reliant on somebody seeing something as I don't read or speak any Chinese. All I know of CY Kwan comes from Wikipedia! Not the best of sources.

I had a quick peek at those Chinese newspaper cuttings David gave the links to and there is some information which may be useful.  There are many names, but all in Chinese only, so I will attempt to translate them as they are normally done in Cantonese, but have no idea if they are officially done this way.  There really is no guarantee the English ones will be right particularly because some family members seem to be born overseas.

As at 1971, after his passing, information gathered from newspapers tells us, in descending order in terms of age:

關景超 (KWAN King Chiu) eldest son, PhD in pharmacy, is a research scientist at Merck in the US.  Single.

His estate was worth HK$12,410,800.  Executor of his will was his wife.  One newspaper report also says that KWAN Cho Yiu's folks originated from 開平 (Kaiping) in Guangdong province, China, though it did not say if he was born there.

Some other names and information are revealed in 1983 when:

關景超(KWAN King Chiu) is still at Merck in the US.  Single.

關勵賢(KWAN Lai Yin) lives in Victoria [breskvar: is that Vancouver?], Canada with husband.  Husband is an architect.  They now have another son 龐定思 (PONG Ding Sze).

關慶賢(KWAN Hing Yin) lives in Windsor, Canada [breskvar: Google Map tells me it is next to Detroit] with husband, who is a lawyer.  They now have a son 張智鴻(CHEUNG Chi Hung) and a daughter 張欣怡 (CHEUNG Yan Yi).

關景康(KWAN King Hong) has his PhD and is working in the US with pharmaceutical company Chering.  He is married to wife 葉潔玲 (YIP Kit Ling) and have sons 關穎峯 (KWAN Wing Fung), 關穎恆 (KWAN Wing Hang).

Don't know if these names help.

Thank you so much for going to so much trouble for me. I really do appreciate it and will now try and chase  CY Kwan's children down!

Will let you know if I have any success.

Information about the wedding on 20 December 1934 appears here (scroll to page 10). Looks like taken outside the former Supreme Court.

Leaving a message on the Tribute Wall or through the funeral home may lead to contact with surviving family members. 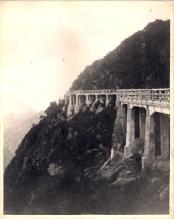