8 Pollock's Path - said to be one of the earliest residences built on the Peak, it was the taipan house for Wallace Harper & Co., now it is the residence of the Consulate General of France. 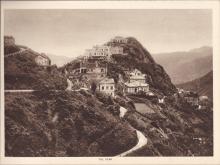 Apparently, The Ridge was once owned by famous Hong Kong financier Fung King Hey.  It was him who sold to the French Consul.  I wonder what the price was.  The pdf file comes from the website of his son's company, Fairchild Group.

A picture of The Ridge is shown on page 4 of the pdf and it also shows the entrance to the old Skyhigh.

Why did the French Consul move?

In 1975, the French Consul's residence was still at Victoria Lodge on Old peak Road.  click here

It was torn down and replaced in 1991 with Dynasty Court.

Did Fairchild buy that property, and offer The Ridge in exchange?

I don't think The Ridge was ever owned by Fairchild.  Fung King Hey's son created Fairchild and it works out of Vancouver.  The house was likely owned by one of the Fung family's HK companies.  However, Fung King Hey was one of the founders of Sun Hung Kai, which I believe developed Dynasty Court.

If memory serves me correctly, FKH's Sun Hung Kai Bank experienced a bank run in the early-1980s and Fung personally put millions of his own money in the rescue.  The article from Fairchild said he sold The Ridge in '81, so maybe there was a correlation.

The ridge was sold 5 months ago. Yet the French Consul General rented it back for two years...

After visiting the residence of the Consulate General of France on Tuesday, I was curious to find out more about the building.  AMO has given this building a Grade 2 listing and according to their research the building was built n 1909 by the Eastern Extension Australasia and China Telegraph Company Limted - a major player in the industry of telecommuications in early Hong Kong.  Then in 1955 the house was sold to Wallace Harper founder of Wallace Harper & Company Limited.  As noted in some of the previous posts, 8 Pollock's Path was one of different land sections carved out from an original land lot (Rural Building Lot No. 1) that was first leased by Henry Lardner Dennys in 1878.

Here's the AMO's report on

Here's the AMO's report on the building. You can see the full report of all proposed Grade II buildings at:

No. 8 Pollock’s Path (普樂道), once known as The Ridge, was one of the earliest homes for upper class Europeans erected on the Peak. It was probably built sometime between 1880s and 1890s, and has changed hands a number of times over the years. The first lessee of the land lot, Henry Lander Dennys, was a rather well-known solicitor in Hong Kong. He was appointed as the Chief Justice’s clerk in 1873 and the Crown Solicitor in 1896, and was promoted as Acting Crown Solicitor in 1902. He also took up the position as a member of the Land Court in the same year.

In 1955, the house was sold to Wallace Harper, an American motor vehicle dealer and founder of Wallace Harper & Co. Ltd. The land was later transferred twice in 1962 and 1974 to Hong Kong Reality and Trust Co. Ltd and to Sun Key Investment S.A. respectively. It was bought by the Government of the Republic of France in 1981, and has been used as the official residence of the French Consulate General (法國總領事住宅) ever since.

The house is a single-storey mansion with a basement. The plan is asymmetrical with an octagonal shaped room on the southeast corner, splayed corners, canted bays and the main entrance set in an internal angle of two walls. A single-storey servants’ wing is built on at angle on the west side. The architectural style is Queen Anne Revival, made popular in England in the late 19th century by the architect Richard Norman Shaw. The house is a mixture of classical features such as projecting cornices, columns, arched window heads and features derived from Dutch architecture such as Dutch gables and tall chimney stacks. The roof is flat. The servants’ quarters are built on a platform supported by a granite retaining wall. Internally the house displays classical style arches, columns and cornices. The basement has rugged whitewashed walls and vaulted ceilings.

This style of architecture is very rare in Hong Kong and the house should be regarded as having considerable built heritage value. Unfortunately the windows are modern aluminum units and the brick walls have been painted. Originally the walls would probably have been exposed red brickwork with the architectural features picked out in white or stone colour.

The Ridge was one of the earliest residential buildings on the Peak. Quite a few historical figures have lived there or been associated with it. As French consular premises it has local interest as well as immunity from requisition by the Hong Kong Government.

The rather rambling floor plan of this building is not very adaptable. Probably the best use is residential for which the house was originally intended.

Remarks: No. 8 Pollock’s Path has not been graded, but it is one of the items recorded by the Antiquities and Monuments Office.

The view, the flat roof, the extensive basement and the white walls are well cemented in my memories of a very happy house. This was the last house standing of the places we lived in prior to 1963, the rest have all gone.

Thanks for writing in -  if you can share any memories or photos of life in Hong Kong at that time, we'll be interested to see them.

I read that the house had an extension approved and a floor was being added on top of the existing structure.  I am surprised that it became a full demolition

Outside of Hong Kong, I have seen historical buildings modified in a similar manner, i.e. a podium and condo tower built on top of the original.  In one case the original building was removed brick-by-brick, catalogued and put back exactly after construction of the new tower was completed.

I worked at the French Consulate in 2005-2006. At that time, I really enjoyed exploring HK, especially old places. I didn't know about the concept of urbex then, but rethinking about my habits, it looks like I was doing some without realizing it!

Anyway, my first post will be on 8 Pollock's Path, not real urbex, actually not exploration at all... It was indeed the official residence of the Consul General of France in Hong Kong and Macau at that time. As these official ambassador or consul general residences are called in the French diplomatic network, it was referred officially as the "Résidence de France", not as 'the Ridge'. Among the staff, we used to nickname it the 'eagle's nest', or (ashamed mode on + thick French accent) 'Bollocks pass'. Sorry for that.

My account is not the most accurate, since I have been up there only a couple of times, for professional reasons only (New Year's Wishes - la Galette des Rois, offical dinners...). I guess those who lived or worked there (Consul General and family, French cook, maids, person in charge of consular properties...) could give much more details, but well, here I am.

What was surprising at first was the relative isolation of the place. Trully at the end of a cul-de-sac after many winding roads, the further the smaller. Felt like going to an end of the world, going up there. I understand it was called the Ridge since it was indeed on a crest. However, an interesting point is that it was mostly facing South only (Aberdeen side) and not really North (Central/Harbour side), while the location would have allowed perfectly a stunning double-orientation of the building. Then, it was 'half-stunning'...

The main lounge was large, facing 'South' and overlooking the garden and swimming-pool, with open views towards Aberdeen. As most juniors at the French Consulate, I was housed in the former staff flats in Aberdeen, so it seemed very metaphoric to know the big boss was several hundred meters high looking down on my (almost) sea-level tiny dwelling... The room was large and like the rest of the building gave a huge impression of 'colonial era' atmosphere. Maybe it's the combination with the white walls (inside and outside), but it reminded me of protected colonial buildings in Singapore. The dining room was smaller, with a huge oval table, but still oriented towards Aberdeen-side. And to me the epitome of luxury was that it was a one-floor building, in an area where any construction tries to gain as much height as possible.

I learnt a few years later that this building was beeing sold. It was not the only Résidence de France in the World to know this kind of fate, actually costs cuts were more and more frequent in the French diplomatic network. And while HK had hosted for years the largest French expat community in Asia, it was beeing overtaken by mainland China (especially Shanghai), Singapore, etc... and I guess the French Consulate lost some relative importance in the network recently, hence the sale.

I am a bit confused by the reports on this page, whether it has been totally torn down, or partially, or only renovated...

To everybody interested in the Ridge House: I used to live at the Ridge House in the 1960's. My name is Jeremy Phillips and I lived there with my Dad Anthony, my stepmother Hannedore and my half sistor Didi plus our two servants and they were very ancient ladies that slept on wooden boards in the sevants wing. The place was vast and all the rooms were huge especially the living room and I remember the cellar well as I had my 16th birthday party in it. The lawn out back was beautiful no pool in those days. We had two 1963 black Chevrolet Impala's as the old man was totally parenoid about being kidnapped so he wanted us to blend in and I think these were the most common American cars on the island. Our chauffeur would pick me up during the week and take me down to the ferry to go over to Kowloon where I attended KGV high school. My dad's largest business was real estate  and he was a developer and built mostly office buildings and blocks of flats. He also was a member of a very exclusive poker club and he did a large portion of his business over private poker games and they would usuallly meet at the Rdge House once a month for a game which would take place in the dining room with the pictuure window looking down the peak. I remember in Typhoon Wanda our chauffeur put the typhoon shutters in backwards and I had to take them out in the lull and replace them in order to padlock them in place.

Fond memories of the place and I am sorry that they had to tear it down it was a real show place when we lived there.

We also had a weekend house overlooking the water in Sai Kung but that's another story.

Kind regards to you all,

Is your name Jeremy? I think

Is your name Jeremy? I think you knew my mother, as she lived in the house at the same time. Her parents worked for your family. I found this post last week after she and I went to see the house. Would love to talk to you if you're interested.