The eastern half of the site is now occupied by the old Bank of China building, and on the western half stands part of the HSBC building. 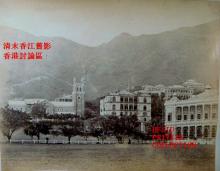 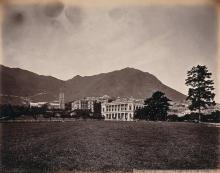 minutes of the meeting re the new city hall building

thanks for posting that link.  i read through the many pages of the document (a vision not often shared with mere mortals within the 'think tanks' of the powers that once were) and found it fascinating reading, a real insight into the thought patterns and highlighting values of the time.

after insulting some of the most emblematic and architecturally most pleasing 'old buildings' on their patch - consequently knocked down without a second thought - the present city hall block was the best thing they could come up with??  were it not for its location, it could be confused with a school or dull block of low rent flats.  it is amazing that the current legco building managed somehow to escape the bulldozer.

The old City Hall opened to

The old City Hall opened to the public on 3rd November, 1869[Wednesday].

Demolishment of the old City Hall building commenced in September 1936 and  was nearly completed by the end of the same year.

The demise of the Old City Hall

It was a slow, drawn-out end to the old building. That it had come to the end of its useful life is made clear in May 1932, when the government announced "An Ordinance for the resumption of the City Hall property."

It noted that the premises were currently closed, and would need expensive repairs. Instead the decision was to demolish it, and sell the land. At that time:

The buildings consist of a theatre on the western portion of the lot and certain halls and rooms on two floors of the eastern portion. Those on the upper floor have been used for balls, receptions and meetings and those on the lower floor for a free library and museum, and latterly also as a Y.M.C.A. Club for the Naval, Military and Air Forces. [ie the Cheero Club]

The original building, however, was much larger than the present one, for it included the Theatre Royal at the western end, which uptil 1931 was the scene of most of the Colony's amateur and professional theatrical performances, recitals and concerts. Condemned in that year, the Theatre Royal was demolished in 1933 to make way for the new Hong Kong and Shanghai bank.

This 1936 demolition would remove the remaining north and east sections so that "within the short space of a month the last traces of this old landmark will have disappeared."

We can also wrap up another point that's confused me. If you look at this Hedda Morrison photo from 1946, there's an ugly little building about where City Hall used to stand. I assumed it was somehow a piece of the old building that escaped the demolition, but that doesn't fit the description above, that the last traces would disappear.

Note the strange cutout in nearest corner of the building? I think that's the shape of City Hall's East Wing. So the little building was built in the City Hall courtyard, and wrapped around the east wing of City Hall. Here's the relevant section of the article:

The section which is now used as the public library will not be affected at present, the demolition plans providing only for the removal of the eastern and northern block. The library section is a new Structure erected by the bank when they moved into City Hall.

David - perhaps you can combine these two threads 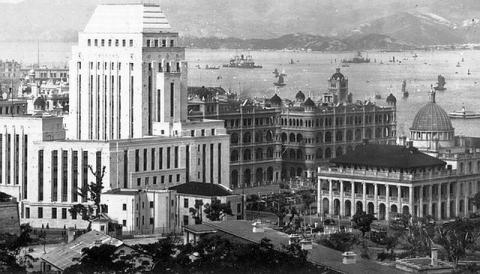 I've been adding the lot

I've been adding the lot number to places I have created.

The City Hall was operated by the "City Hall Committee"

For record, the demolition of the western wing of the City Hall which contained the old Theatre Royal was practically completed in August 1933.

The City Hall situated off

The City Hall situated off Queen's Road a little further to the eastward close to the Cricket and Parade Grounds, was erected by public subscription about the year 1865. The most interesting of its many features in the museum, where a varied collection of local and  tropical specimens of birds, reptiles and insects, as- also minerals, together with many other curiosities of native handiwork, will admit of a pleasent hour being spent.

A valuable library and reading room are to be found adjoining the museum, where, for those who maybe curious, a complete record ,in the Government Official Gazette dating from 1841, of the Colony's progress in every department, will be found. There is also a very pretty theatre, and several spacious assembly rooms suitable for receptions, public meetings, balls, &e.

The Chamber of Commerce holds its sittings within this building.

The City Hall was completed on June 28 1869, almost exactly 64 years ago, and was opened in November 2  that year by H. R. H. Prince Alfred Duke of Edinburgh. The foundation stone was laid on February 23 1867 by the Governor of the period, Sir Richard Macdonnell.

In this connection the interesting question arises what is to be done with the old foundation stone? Is it to be dug up and preserved or merely buried under the foundations of the New Hongkong Bank? An enquiry at the P. W. D. recently elicited a reply that the authorities have not decided on this question: indeed, they do not know whether the old foundation stone is likely to be disturbed at all, and if it is, the matter of its disposal will have to be left over until then. The location of the foundation stones lies under the North east corner of that section of the building still standing opposite the Supreme Court and Cricket Club

It might be pointed out that the land for the site was a free grant by the Government, made in 1864. The Theatre Royal portion of the building was christened as far back as November 3, 1869 when the first performance was held therein, by the Amateur Dramatic Corps (as the A.D.G. was then known), and members of the German Club Concordia

In 1890 at the time of the Praya Reclamation scheme, the committee of the City Hall considered that the shareholders were entitled to benefit by the scheme as regarded the portion of the reclamation abutting on their site. The Government contested this, and the committee obtained legal advice. Despite their efforts to get some form of recognition of their supposed rights, however, the committee came up against definite Official opposition, and the matter was "allowed to stand over". There is no record of further efforts to obtain compensation.

The building has not been without its legends, and the best-known one it "that the unicorn on the coat of arms on the facade used at one time to make nocturnal excursions abroad. The chain around it is supposed-to keep it in check.

The City Hall fountain was presented to the community by Mr. John Dent, and erected in 1864 It  was demolished last year to make room for the bank building.

It might be noted that the City Hall was designed by a frenchman (M Hermite), whose plans had been accepted in open competition and but for the references in the speech I have quoted even this architect's name long forgotten had possibly remained unknown

The rapid approach of the time when the new premises of the Hongkong and Shanghai bank will be completed, remind us that the portion of the City Hall occupied as temporary offices for the bank will be evacuated by the end of this year and must, ere long be demolished. Thus will pass the last traces of the Colony’s first civic centre

A report from the Building

A report from the Building Committee on the completion of the building is given on page 3 of The China Mail, 1869-06-25, and gives a useful overview of the project.

Hi manswkwok, I don't know if it is worth to try Palmer & Turner Group?

The architect of the 1st generation Hong Kong City Hall was Achille-Antoine Hermitte, but he quitted the project before completion and accepted another commission in Saigon. In an article at China Mail "Report of the City Hall Committee" on 25 June 1869, it says that afterward a Mr Clarke was appointed to take Hermitte's place, but he died in September 1868. Later a Mr Salway was appointed as the project's Architect, who saw its completion and opening in 1869. Would this Mr Salway so coincidently William Salway, who founded an architectural firm in Hong Kong which has become Palmer & Turner Group? If yes, the architectural plans of old City Hall may be at P&T's deposit, if they were passed from Hermitte to Clarke and then to Salway, and, with sheer luck, survived the wear and tear, humid climate, occasional fire hazards in Central, Japanese Occupation...etc.

I'd also like to hope the architectural plans still exist. Currently the trace of how the facilities were laid out inside the building is only based on textual description from newspapers of 19th and 20th centuries.

Hoyin. I am sorry it took…

Hoyin. I am sorry it took such a long time to reply to your comment, after liaising with P&T for quite some time. They consulted their archive and found out they don't possess the city hall floor plan.  My question is whether the archive of HKU Faculty of Architecture may have the floor plan? Thank you and I look forward to your reply. 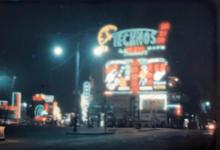