George Fenwick was the owner of a shipyard in the area of Queen’s Road East and Ship Street (Wanchai).

He appears for the first time in the Jury List for 1877 as "Fenwick, George, Assistant, Inglis & Co.", and two years later as "Engineer" of the same company.

In the 1884 Jurors list he appears as Engineer of Fenwick & Co, living in the district Wantsai.

In the 1895/96 Jurors list he appears as Manager of Fenwick & Co, living in the Hongkong Hotel. 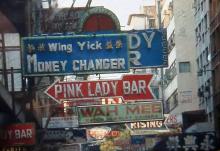