The Convent was completed on 1 July 1929, and part of it was converted into an orphanage accommodating babies of destitute parents. The idea of a proper children’s hospital was raised on 25 July 1934 with the encouragement of Governor Sir William Peel who had previously visited the convent. The idea finally materialized in 1937 when the Precious Blood Hospital (寶血醫院) was opened through donations and the efforts of Bishop Henry Valtorta (恩理覺主教) and others. Part of the building served as an orphanage, and this continued well into 1952 when a new orphanage situated in Fanling (粉嶺) was completed.

The Precious Blood Convent is situated between two modern buildings, the Precious Blood Hospital and the Tack Ching Girls’ Middle School (德貞女子中學), but blends in quite well due to its strictly symmetrical stripped-down Neo-Classical style with Neo-Georgian and Italianate Renaissance elements.

The main elevation facing Un Chau Street is finished with Shanghai rendering. The lower storey, and unusually the top storey, are rusticated with horizontal grooved joints to resemble stonework. The façade is symmetrically divided by pilasters into five bays. A simple classical portico and double-entry staircase form the entrance. The pilasters are raised off a projecting cornice or ledge at first floor level of beneath a wide projecting dentiled cornice in Italianate style at third floor level. There are two semi-circular Diocletian windows and, unusually for classical architecture, all the other windows are tripartite (divided into three parts), possibly a reference to the Holy Trinity. The boundary wall is built of coursed granite blocks featuring a Neo-Classical gateway with an Art Deco inspired pediment.

The Convent is quite a rare building type in the Sham Shui Po area. It has some unusual features which make it interesting and a valuable piece of built heritage. All the original windows appear to have been replaced with aluminum windows and there are some additions on the flat roof. Apart from that the building appears to be fairly authentic.

Today, the Precious Blood Convent continues to contribute to the well-being of Hong Kong society. The Convent is situated in a small street community comprising two schools, a kindergarten, a hospital and a babies’ home and therefore has considerable social value as well as local interest.

Should the Convent ever cease to be used as a residence and summer retreat for the Sisters, presumably it could be converted into a useful annex for either the hospital or the school next door.

Remarks: Not yet graded

The Precious Blood Convent is one of the items recorded by the  Antiquities and Monuments Office in view of its historical and architectural significance, but has not yet been graded as a historical building. 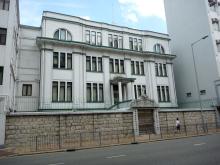 The bazaar and fete in aid of the Children's Hospital and Orphanage at the Convent of the Sisters of the Precious Blood, Shanshuipo, was declared open by Mrs. W.T. Southorn yesterday afternoon.

Mrs. Southorn was received by the Chairman, Mr. Simon Tse-yan.

Addressing the gathering, the Chairman said: - "The Sisters of the Precious Blood have always devoted themselves to the welfare of orphans in this Colony. The bazaar to-day is a great factor to support this Institution, and it gives me the utmost pleasure to welcome Mrs. Southorn, who has so graciously consented to open this bazaar."

Mrs. Southorn said it gave her great pleasure to open the bazaar which supported such a good cause. She only regretted that the Hon. Dr. R.H. Kotewall had not been able to attend in his capacity as President.

She paid a tribute to Mr. T.M. Hazlerigg, whom she said was the pillar of which the Hong Kong Society for the Protection of Children rested.

The band of the St. Louis Industrial School gave a varied selection of airs during the afternoon.

The bazaar will be open to-day and to-morrow." 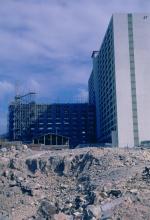