The demolition date is approximate. Although the building's interior was demolished, the facade was preserved and now forms part of the Sai Ying Pun Community Complex.

Notes below from the "AMO's Brief information proposed grade I items":

Erected in 1892, the Old Mental Hospital (舊精神病院) was originally quarters for the European nursing staff of the Government Civil Hospital. In the 1940s, the building was used for the treatment of mentally ill female patients.
After the opening of the Castle Peak Hospital in the 1960s, it was turned into an out patient clinic for mentally ill patients. The building was vacated in the 1970s and left abandoned for two decades. Over a two-decades’ abandonment, the building was given an infamous name, the “Haunted House in High Street.”
Only the façade the Hospital (which features boulder faced rustication) now remains, the old building having been demolished and the site redeveloped as the Sai Ying Pun Community Complex (西營盤社區綜合大樓) completed in 2001.

In considering the arched verandah, the bolder faced rustication, and the Roman style gables, the Old Mental Hospital resembles a work of Italianate Renaissance architecture in Florentine style. The proportion used in elevations and the balustrade design show similarities to Henry H. Richardson’s work who was a famous American architect in the 19th century.
The two-storey boulder or rock-faced rusticated arched granite façade resembles Florentine style, Italianate Renaissance architecture and also the massive Romanesque architecture of the American architect Henry Hobson Richardson. The technique was used to create an appearance of strength and impregnability. The robust and rugged composition is relieved by dressed ashlar moulded and profiled imposts and cornices, and plain quoins and band courses giving the whole structure elegance and dignity. Further graceful effects are achieved by the use of pediments, pinnacles, decorative parapets and ornamental ironwork balustrading to the verandahs.

This style of architecture is quite rare in Hong Kong so that the façade is a valuable piece of built heritage. The present timber ceiling, marble flooring and concrete roof over the verandahs are new works completed during the construction of the Sai Ying Pun Community Complex. Although the façade can be said to be authentic, its retention at the expense of the building which it represented is a questionable conservation practice.

The historical social importance of the Old Mental Hospital has now been recognized after two decades of abandonment. It is a well-known landmark in Western District and had a perhaps understandable reputation for being haunted with local residents.

The Old Mental Hospital has group value with the existing Eastern Street Methadone Treatment Centre (Old Lunatic Asylum Chinese Block) (Grade II) on the opposite site. The site of the Diocesan Home and Orphanage (now Diocesan Boy’s School) in Eastern Street, one of the stations of Sun Yat-sen Historical Trail, is at the back. The aged district of Sai Ying Pun area, the neighbouring King George V Park and the surround huge old trees match with this heritage building nicely.

The retention of the façade only does not give very much scope for adaptive re-use, but the long verandahs or galleries could be used for art exhibitions to display the work of local artists.

In 1981, the building was accorded Grade II status by the Antiquities Advisory Board (AAB) in view of its historical and architectural significance. In 1992 the masonry façade was upgraded to Grade I.

END_OF_DOCUMENT_TOKEN_TO_BE_REPLACED

Three buildings of the Mental Hospital "Although the façade can be said to be authentic, its retention at the expense of the building which it represented is a questionable conservation practice." 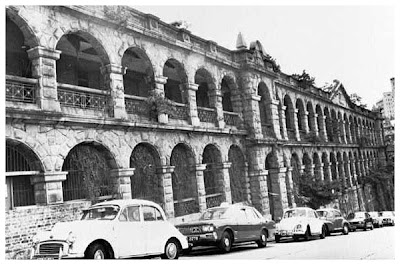 The buildings were fully completed and occupied in June 1892

Civil Hospital - Extension of Staff Quarters - This work was completed and handed over to the medical department in March. The extension comprises a dining room, a sitting room, 6 bedroom, 3 bathrooms, a box-room and pantry and 4 rooms for servants. The building is faced with Amoy bricks and granite dressings  to correspond with the original building

Thanks to Ho-yin Mak for extra information about the extensions:

If we make use of the"cover photo" of the Medical Staff Quarters at AMO website (http://www.amo.gov.hk/en/monuments_111.php), we can see that the bay with an emblem on top and now serving as entrance of the building was the boundary when completed in 1892. The extensions were done on up-hill direction. The extension completed in 1906 increased four bays, and then the one in 1908 added an extra two bays.