War and Revolution in South China - The story of a transnational biracial family, 1936-1951

A lot of the content on Gwulo, the Wartime Diaries in particular, refers to the wartime experiences of people in Hong Kong. This book is a useful read to get a better idea of what was happening over the border in southern China at that time, and in the years immediately before and after the war. It helps fit Hong Kong's stories into the bigger picture.

The Rhoads family experienced many of the major events of those years, so as Edward tells the famlily's story, we also learn the history of south China in the first half of the twentieth century. (Though the book's title gives the period covered as 1936-1951, the chapter on his mother takes us further back as she was born in 1909 in the reign of China's last emperor. She was part of an extended family, as her father Ngan Heung-Cho had eighteen children altogether, with several wives and concubines. She studied at the True Light Middle School in Canton, during China's tumultuous 1920s.)

China and Japan were already at war when Edward was born, and just a few months later Japan captured Canton. Lingnan University, together with Edward and his parents, relocated to the 'safety' of Hong Kong. Of course, a few years later Japan captured Hong Kong as well, splitting up the young family. His father Howard was interned in Stanley Camp with the rest of the western civilians, while Edward and his mother stayed out, and were able to get to safety in Free China, beyond the Japanese-occupied area.

In 1942 Howard was repatriated to the USA along with most of the other Americans in Stanley Camp, but soon made his way back to China again, to rejoin his family. Lingnan University had reformed at a new location in Free China, and that's where the family lived and worked until another Japanese attack sent them fleeing north to safety in Chungking. After the Japanese surrender, the family returned to Canton to take part in re-opening Lingnan's original campus. There was a year's leave in America, but otherwise they stayed in Canton, living through the switch from Nationalist to Communist control in late 1949, until the eventual expulsion of foreigners in 1951.

As a small example of a lesson learned, I'd always imagined that the arrival of the Communists in Canton was the beginning of the end for overseas organisations like Lingnan. But Edward explains that the first school year under the Communists was fairly uneventful, and it looked as though Lingan would be left to carry on as usual. The big change came with the Korean War: once Chinese and American soldiers were fighting, American civilians were no longer welcome. The family left China for the last time in early 1951.

A couple of observations for potential readers:

First, although the title says it is 'The story of a ... family', it is a story about the family, rather than by the family. I was expecting to read more of the family's own descriptions of their experiences, but there are hardly any. The work on this book began long after Edward's parents had died, and they hadn't left any diaries or memoirs. Then as Edward says,

... I myself am not much of a source either. I was thirteen years old when we left China in 1951, and it might be thought that I would have been old enough to remember a fair amount of what had gone on, particularly toward the end of our stay in China. But perhaps because we had had to move around a lot during those thirteeen years, what I do remember is very confused in my mind.

Despite the lack of family sources, Edward does some great detective work to piece together what happened to him and his parents, using a wide range of sources, including material from people who lived through very similar experiences. He was also fortunate that his parents worked for organisations that were great record keepers. As an example, many of the letters that were dictated to his mother still exist, showing her initials as the typist. They're one of the ways he follows her changing career and frequent movements.

The second point is that Lingnan University is a major character in the story he tells. If anyone is interested in Lingnan's history during these years, this will be a valuable book to read. Edward is scrupulous with his footnotes and sources, so this book will lead on to plenty more material.

The book is available from the publisher, Hong Kong University Press: https://hkupress.hku.hk/pro/1831.php 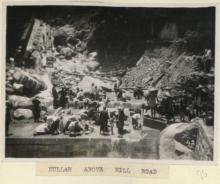