John Thomson was a photographer who took some of the earliest photographs of China and Hong Kong in the 1860s and early 1870s. There is currently an exhibition of some of John Thomson's photographs (including some taken in Hong Kong) at the Heriot Watt University in Edinburgh, until March 2022.

The following is an extract from an article published on the BBC website on 3 October 2021, "The pioneering Scots photographer who captured China":

"Pioneering Scottish photographer John Thomson took some of the earliest pictures of China on record. He was born in Edinburgh in 1837 and set off for the Far East in 1862 where he spent the next decade capturing images from all walks of life. In 1866 he became the first person to photograph the now world-famous Angkor Wat religious monument in Cambodia. Images from his journeys form one of the most extensive records of any region taken in the 19th Century.

Thomson was the son of a tobacco spinner and shopkeeper. He was apprenticed to an Edinburgh optical and scientific instrument manufacturer where he learned the basics of photography. Thomson set sail from Leith in 1862 with a camera and a portable dark room. He set up in Singapore before exploring the ancient civilisations of China, Thailand - then known as Siam - and Cambodia. On his return to London, between 1876 and 1877 Thomson worked with Adolphe Smith, a socialist journalist, on a series of illustrated articles documenting the street life London and the urban poor. And in 1881 he was appointed photographer to the Royal Family."

Source: https://www.bbc.co.uk/news/uk-scotland-58733514 (this link shows a selection of the photographs in the exhibition)

Some of John Thomson's photos

Some of John Thomson's photos:

(If anyone adds more of his photos, just give them the tag John Thomson to add them to the list.)

I have quite a few of John Thomson's photos downloaded from the Wellcome Collection and then tweaked. The one below is the one most commonly seen.

These are two of the original glass photonegative, wet collodion photo plates.

Stitched together to form a panorama.

Then colorized with a free software.

John Thomson's book "ILLUSTRATIONS OF CHINA AND IT'S PEOPLE"

John Thomson's ILLUSTRATIONS OF CHINA AND IT'S PEOPLE, vol. 1-4, are available here. 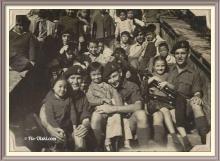