Returning to the Woking postcard fair, here are the other pictures I bought showing people around Hong Kong.

That's the title the seller wrote on the back, but looking at the roof on the right I think this was taken in mainland China rather than in Hong Kong. And though the standing man may be a barber, I believe the service he is providing is to clean his customer's ears, digging out ear wax, etc. 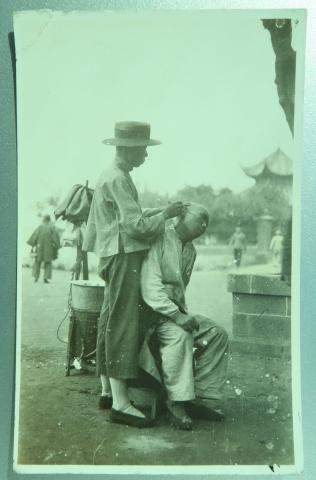 If you look at the magnifying glass below (you might want to zoom in) you'll see he's holding the tools of his trade - various rods, scoops, and brushes. I don't remember ever seeing this in Hong Kong, but I've definitely seen people offering an ear-cleaning service on the streets of Guangzhou.

Another service that used to be popular was having the inner lining of your eyelids scraped! I'm still waiting to see a photo though. Thankfully it has fallen out of popularity, as it was a very common way of picking up an eye infection. 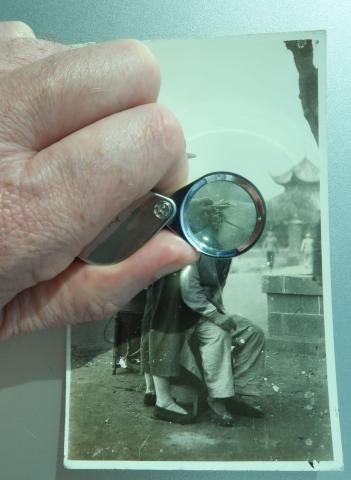 That little magnifying glass accompanies me to every postcard fair. First I'll skim through what's available, picking out scenes I'm interested in. I'm looking for sharp photos that will have lots of detail to explore once I've scanned them in to the computer, so next I take a closer look with the magnifying glass. Many that looked good at first glance fail to make the grade, and are handed back to the seller.

I'll come back to this after scanning to see what we can learn from the posters in the background. I also hope to lighten the shadows to make the scene look better. 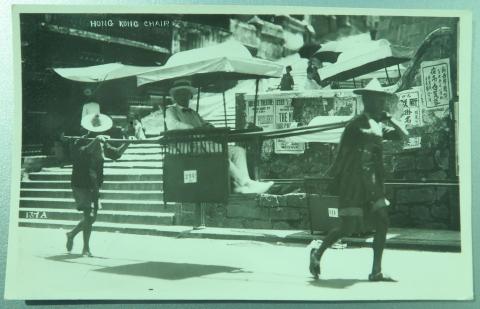 Apologies for the quality of some of these. I'm taking photos of them on the windowsill of my hotel room. The window's tinted glass adds a colour cast, and the camera doesn't do as good job as the scanner will.

3. Rickshaw on Queen's Road near the junction with Garden Road

A view looking west along Queen's Road (present-day Queensway), with the junction of Garden Road on the left, and the railings around the cricket pitch on the right. 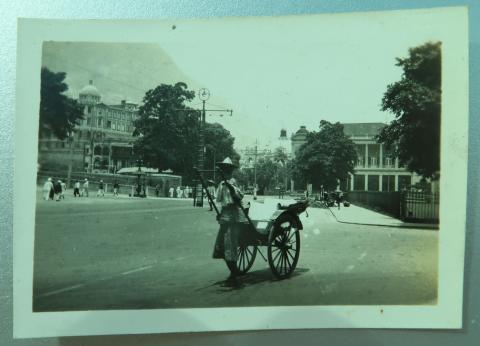 Again, that's the writing on the back of the photo, though this time it looks to have been written by the original owner, rather than the seller. The man is definitely drilling, but I'm not so sure about the gelatine charges. He looks to be breaking up a free-standing lump of rock, rather than drilling into a rock face to insert explosive charges. 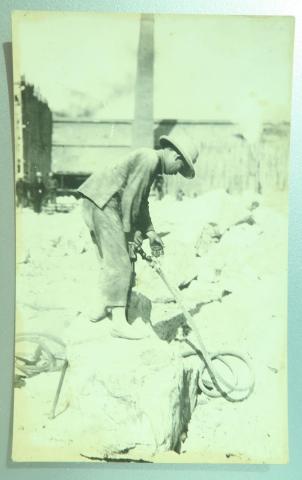 You see how this photo curls up? That's because it is a photo printed on thin paper, rather than the thicker card of a postcard. It was probably taken for a newspaper, with paper copies made available for readers to buy.

If we have any HK Club historians reading, any idea whether they were wearing the white or the striped tops? 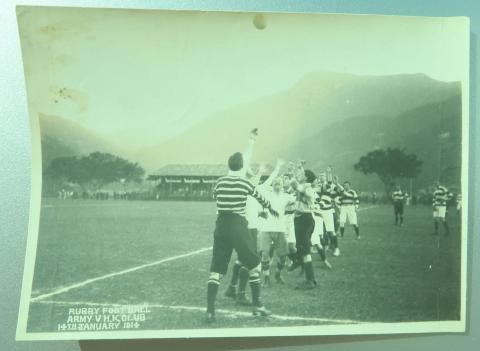 That ends the few additions to my photos of people. Tomorrow we'll look at some city scenes. 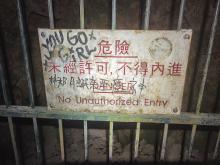