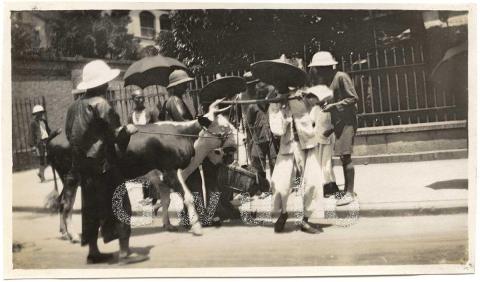 This is the only photo I have in my collection with a 'Year Of The Ox' theme. I'm still trying to work out what was happening when the photographer took it.

Obviously there's a cow walking across the scene, but how do the two men with the shoulder pole and basket fit into the story?

Are they part of the cow's entourage, with a basket filled with something tasty to keep the cow moving in the right direction?

Or are we looking at a slow motion collision, as the cow-herder and the men with the basket all refuse to give way? If only we could see what happened next!

The current year in the Chinese calendar, 牛年 in Chinese, is sometimes translated as the Year Of The Cow, and other times as the Year Of The Ox. I turned to the trusty Cantodict for help to see if there was a right way to translate it. Their translation of the second character gives several meanings, but only the first one, 'year' applies here:

Their translation of the other character also gives several meanings:

So no clear winner, Cow or Ox are equally valid.

Then what is an ox, exactly?

I know the differences between cows, bulls, and cattle, but realised I couldn't give a clear explanation of how an ox was different. I looked it up in the Cambridge Dictionary, which defines it as:

a bull (= male cow) that has had its reproductive organs removed, used in the past for pulling heavy things on farms, or, more generally, any adult of the cattle family

I'll go with the first part, defining an ox as a castrated bull that was used for pulling heavy things.

The animal in the photo looks a bit dainty to be pulling heavy things, so I think it was more likely to be a cow than an ox. I also notice it has the black and white pattern we're used to seeing in Europe, not the yellowy-brown colour of native Chinese cows, so this cow is a visitor from overseas.

I found another photo in my collection that shows a much sturdier animal. 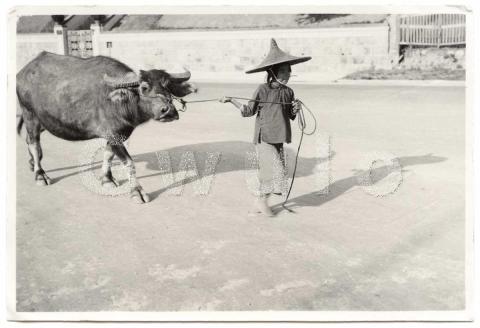 Still not an ox though. This is a 水牛, or 'water cow', more commonly known as a water buffalo. Unlike the cow in the first photo, the water buffalo is native to Hong Kong.

To round off my stories of cows and oxen, I give you two Chinese characters that I spotted during a walk on Lamma: 火牛.

As is often the case when I see simpler characters like these, I went through three emotions in quick succession:

They were printed on the side of a large stainless-steel cabinet, and my wife told me they mean 'transformer', but couldn't explain why. If any readers know the connection between fiery cows and transformers, please let us know in the comments below.

Let me finish this first newsletter in the Year Of The Ox by wishing you health and happiness in the year ahead.

Transfomers have terminals for the cable connections, frequently these stick up from the top of the transformer and look like cow's horns - sometimes these are actually referred to as horns, this could be the "cow" character origin.  During damp weather there may be sparking (or corona) discharges around there terminals, this could be the "fire".

There are various sayings as to why transformer is called "fire cow" in Cantonese. This term is not used in other parts of China where they called it a "change volter" (bin ngat hei) in Chinese.

1.  In the old times, when the locals heard the foreigners speak "Transformer", they had difficulties in speaking the "trans" in the dialect and therefore just named it "former". In the longer run, the pronunciations changed from the direct sound "for" "mer" to "for ngau".

2.  The appearance of the heavy transformer resembled a big and heavy cow with horns (with the porcelain bushons).

3.  The low humming frequencies produced by the transformer was like the noise from cow's mooring. The heaviness resembled the weight of a cow.

牛 as such is genderless so called, not referring to male or female animal. It is impossible to interpret it any other way when the character is used on its own. 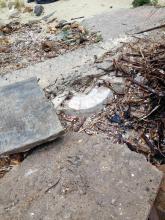