The first extract from the new Gwulo book discovers that although this photo might look dull, its story has hidden treasure - literally! 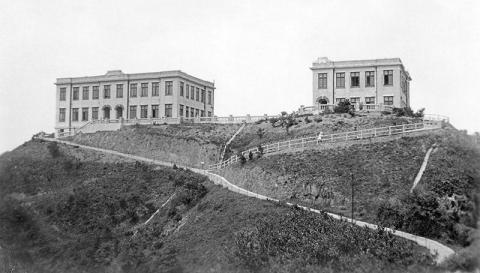 Our last photo from the album shows these two buildings on a hilltop. The site also has a grim story attached, but our album owner couldn’t have known that as the events didn’t take place until the 1940s.

Back to 1929, and where was this taken? We’ve obviously left mid-levels behind as we’re at the top of a hill. I drew a blank, and asked readers on the Gwulo website for their help. Regular contributor Moddsey pointed me to the hill between Wanchai Gap and Magazine Gap, and sure enough, it’s a match! Now that we know where to look, I can also see the hill back on pages four and seven, and in this 1930 panorama from Volume 1 (p. 90).

These buildings certainly had a fantastic view out over Hong Kong and Kowloon. Of course it also meant the buildings could be seen from most of Hong Kong’s built-up areas. That would be their downfall.

Skip ahead to 1942, not long after Hong Kong had surrendered to the Japanese. The Japanese started work on a grand war memorial that would commemorate their victory, and honour their war dead. They wanted a location that was impossible to miss, so this hilltop was perfect. Down came the houses, and up went a large granite platform in their place, with the new memorial on top.

But Japan’s fortunes soon changed, and the memorial took on a new, darker purpose. In post-war trials, Japanese Major Hirao Yoshio said that by 1943 they already knew Hong Kong would eventually be recaptured, and that the memorial was to be a tomb where all the Japanese would gather to die. Fortunately, Japan’s sudden surrender in 1945 meant those plans were never put into action.

After the war, Hong Kong wanted this glaring reminder of the recent miseries removed as quickly as possible. It took longer than expected, as the engineers found that the memorial was an almost solid block of reinforced concrete. Finally, in February 1947, the wait was over.

The granite platform still survives, though. If you visit, you’ll quickly spot its buttresses, i.e. the three vertical lines in the photos above. Also keep an eye out for buried treasure: legend says a rare 500-year-old Japanese sword was buried there in 1943, and is still there today!

The new book, Volume 4 of Old Hong Kong Photos and The Tales They Tell, starts with a sequence of photos from a photo album dated to around 1929. None of the photos look very exciting at first glance, but dig a bit deeper and they all have their surprises.

Volume 4 of Old Hong Kong Photos and The Tales They Tell is available to order direct from Gwulo. 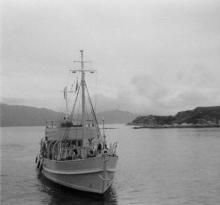