Shipbuilding in Wanchai started in the mid-1840s already. On Marine Lot No. 31 the Emery & Frazer Co. started business and constructed a slipway. After many changes in ownership, in 1856 Ross & Perkins Co. expanded the shipyard into the adjoining Marine Lot No. 36. In 1868 it was known as the Victoria Foundry. In 1870, John Inglis took over the Victoria Foundry. (Source)

This area is probably shown on the photo below:

The company acted under the name of Fenwick & Morrison Co.  In 1887, George Fenwick set up his own business Fenwick & Co. (Source),.

"[...] there had been a creek running through the lot from which ships were launched. Then the government closed the creek and the drawbridge at the Praya. This forced the company to stop building larger vessels, though small launches were still built and carted across the Praya to the sea".

The small basin and the bridge can be seen on the 1888 map shown below.

It existed in 1886 when it was mentioned in the Hong Kong Government Gazette from the 20th November, 1886:

"…macadamizing, &c., the Praya from Spring Garden Lane to Fenwick’s Bridge on a length of 645 feet”.

After the death of George Fenwick in 1896, the company was continued by W.G. Winterburn.

It is said that Messrs. Geo. Fenwick and CO., Ld., will hold an extraordinary meeting shortly to sanction the proposal to increase the capital of the company, which money, however, is not expected to be required before six to nine months have elapsed. It be remembered that the company recently acquired a convenient site for their works at North Point, having the prospect of being obliged to vacate their present promises. Their water frontage will shortly be taken away by the new reclamation scheme. The area of their new lot is about 215,000 sq. ft., with a deep water frontage of 400 ft. in length. To reclaim this site, work now proceeding, it is estimated that it will cost the company about $1 a square foot. It is hoped to dispose of the present premises for a good figure. The lease is held on a 999 years' tenure, and, being a marine lot, carries the right to the projected reclamation pertaining to the frontage. The directors of the company consider that it will be necessary to increase the capital to $450,000, an increase of $300,000.

The company moved to North Point (the exact location is unknown), but in 1911 the end came with liquidation of the company. 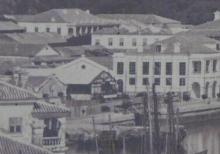 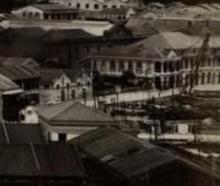