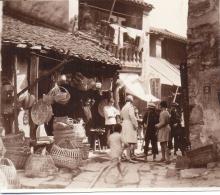 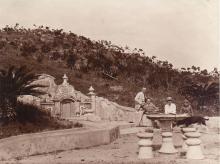 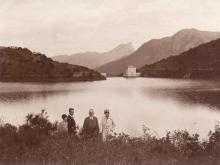 Resident of La Pleta, Ordino, Andorra for over 25 years

You beat me to it, eurasian_david.

To add a bit more detail, my mother's full name was Alice Marie Leonie de Chaffoy de Courcelles: Kiki was a pet name in childhood that stuck. She didn't like it, but everyone else did! She was born in Hamburg, her father Belgian and her mother German, and they came out to Hong Kong in 1930-ish, when my mother was 11.

Her first wedding was

Her first wedding was reported on page 5 of the Hong Kong Daily Press, 1941-04-03. The article includes a photo, but the online copy is not very clear.

The bridegroom is the only son of Mr. Edouard de San, of Brussels, Hon. General Secretary of the Belgian Congo and formerly Governor of the Kasai Province in the Congo.

The bride, who was given away by her father, looked charming in a dress of white brocade satin in strict princess lines and carried a bouquet of white lilies.

Miss Challinor and Miss Christensen, the bridesmaids, respectively wore dresses of pink and blue flowered taffeta in early Victorian period. Their bouquets were of white carnations.

The bride’s mother was attired In a dress of fine blue French lace with hat by Gage’s, sailor with pink roses.

The duties of bestman were discharged by Mr  M. Pirenne.

Following the Church ceremony, a reception was held at the Jacobean Room of the Hongkong Hotel where many friends gathered.

The honeymoon is being spent at the Repulse Bay Hotel Mrs. de San’s going-away costume being a silk dress of dark green with white spots.

The bride, who is a popular member of the Colony's younger set, came to Hongkong in 1930 and was a pupil in the Central British School before returning to Belgium for a few years to complete her education at a boarding school.

She is a keen member of the Fanling Hunt, the Cottage Club and the Royal Hongkong Yacht Club.

The bridegroom was born at Boma, Belgian Congo, and entered the diplomatic service of his country in 1935, being first posted to Berlin and then to Chungking, where he has been for the past two years.

He is also a well-known sportsman, especially in the field of gliding. He holds the Belgian record for the highest flight for gliders with 16,000 feet, and in April, 1940. broke all Far East records for soaring and' gliding with a sustained flight of five hours and a height of 6,200 feet over China's war capital.

Mr. de San holds the rank of Lieutenant in the reserve of cavalry of the 1er Regiment Royal des Guides.

What a grand name your mother had! They are great candid shots of your mum and family, a treasure to keep for future generations of your family. These days we take for granted how easy it is to take photos with a smartphone at hand.

Thanks for sharing a slice of Hong Kong life from a bygone age.

Thanks David. There are more photos to come.... Its all a question of time.

Thankyou moddsey: my mother loved riding out at Fanling, and evidently she was a bit of a daredevil. A very telling snippet. 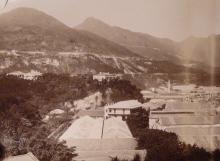