looking for an ancestor

I am looking for an ancestor who died in HK in 1866. He was buried in 'the catholic cemetery of Hong Kong' and the tomb has been made definitive in 1883 I believe, at the same place. I have only a picture of the cemetery before the tomb has been renewed.

I am trying to use the details around to find the place, pecularly the gate behind the cross.

Would you please help me find where is this place or to tell me wich cemetery it should be in 1866 ?

St Michael was not yet open when he died.

His name was Louis O'Mahony, he was chancellor at the french consulate.

you have a photo?

you have a photo of the original grave from 1883?

looking for an ancestor

This is the only document I have. the text says it is a horizontal white marble tomb stone of 6 feets x 2.5, with a vertical cross of 3 feets (white marble as well).

The tomb has been renewed in january 1883.

If it helps, the burial has been related in the Hong Kong evening mail of the 23rd of February 1866, day of his burial

This all what I have. 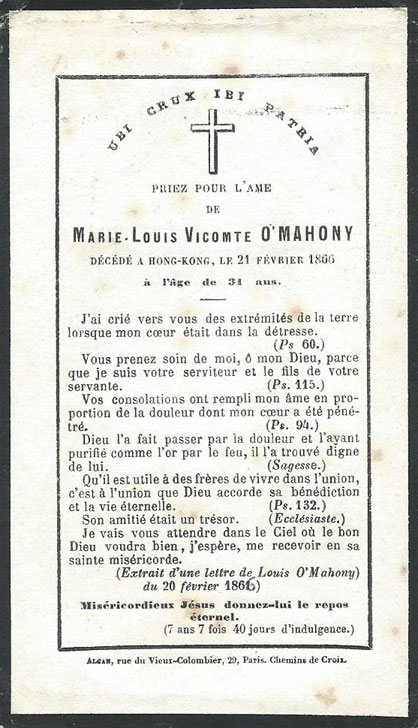 I've found the Office of the Catholic Church very helpful in the past when I was enquiring about my grandfather's grave - admittedly I visited in person. If you send them the above information and the photograph, I'm sure they would want to try to help you with such an eminent ancestor. The link is https://archives.catholic.org.hk  It gives a general email address for the archivist. Perhaps David can give you a personal email address for the archivist.

Looking for an ancestor

Great, thank you Jill, it looks really helpfull. I will let you know the outcome.

Up above you wrote:

St Michael was not yet open when he died.

But in 1866 St Michael's Cemetery had already been open for more than ten years, so I think that is where he will have been buried.

You can find more notes about researching graves there on the page for St Michael's cemetery at: https://gwulo.com/node/8233

Mentions in the Daily Press, February 1866

"It seems that poor M. O'MAHONEY who died the other day was a victim of hydrophobia, brought on by the bite of a dog—-belonging we are told to M. VAUCHER. A soldier of the ninth has since been killed by a bite from the same dog. He was bitten on Thursday and died the same evening. A third person—another soldier has also been bitten, though not fatally in this case so far as we hear. Comment on such facts is altogether superfluous."

"The Funeral of M. O'Mahoney.
At the funeral of M. le Vicomte O’Mahoney whose melancholy death we have recorded, M. du Chesne addressed the following words to the mourners." <Followed by a speech in French, which unfortunately I can't read.>

Looking for an ancestor

The man at the gate of St Michael told me the catholic part has been open after 1870, I believe he told me 1875. Also, I was not able to retrieve the details of the gate on the picture in the cemetery. I will print it and try again, but I believe that, after the cemetery of St. Francis was closed, the catholics were buried in the Chistian one (anglican ?) next to St. Michael. The picture let us see some details of a white monument on the other part of the gate which could be a part of another religious monument, maybe the hindu one still on the same site. I will try again to go there next week end and if necessary, I will try to go to the catholic archives you suggested.

Thank you also for the transcription of the newspaper which give me also a lot of good details.

I believe I am pretty close now, I will let you know. I am really impressed about what you were able to give me.