Though little remains of these structures, Rob Weir has managed to piece together their history and locations:

In 1894, the Hong Kong Defence Plan introduced the use of blockhouses. These were to be used as advanced posts for scouts and signallers, also forming the nucleus of a strong second line as reinforcements were brought up. Thirteen were planned, nine on the Island from the west through south to south east, and four in a line across the Kowloon Peninsula, from approximately Ma Tau Wai in the east to Yau Ma Tei in the west. The defence plan proposed that a type of stone blockhouse be constructed. It further suggests they should be built as far as the foundations and walls in peacetime and, if possible, they be completed before hostilities commence.

They had disappeared from the Island portion of the 1897 Defence Plan, but were still included as “will be constructed” in the Kowloon portion in the 1900 plan. The 1901 plan, revised to include the recently gained New Territories (1898), moved the defence line well north and the Kowloon blockhouses had disappeared. There is no other evidence at present to indicate any were ever built.

The blockhouses are built

A review of the situation in 1911 considered that attacks on the mainland would probably come from either a Chinese Army or a raiding force of one of the European Powers. Defence against either would be along the line of the Kowloon hills, which had been strengthened by a series of blockhouses.

Thirty were built along the ridges, numbered from 1 at Devils Peak in the east, to 30 at Lai Chi Kok Pass in the west, divided into five sub-sections. They were to have several functions: be a base for infantry carrying out observation duties and patrols; protect the guns of the movable (mobile) artillery; and afford protection to places of importance e.g. the railway tunnel at Beacon Hill.

The map below shows their location (email subscribers will need to view the website version of this page to see the map).

The design of the blockhouses

Although it has not been confirmed, it is probable they were Rice type circular Blockhouses, as they were the standard British Blockhouse of the time. Devised by Major S.R. Rice of the Royal Engineers when he served in South Africa during the Boer War, they were constructed of two layers of corrugated iron, separated by shingle (small stones), with built in openings for observation/weapons, and a low set door. The roof was of corrugated iron, the original design had a gable roof but was later changed to an circular shape. They were prefabricated and came as easily transported and assembled kits. It was stressed that they were not suitable when artillery was involved. Surrounding the Blockhouse would be a stone wall which started below the loopholes and extended down to form the face of a trench surrounding the Blockhouse. A barbed wire barrier surrounded the position, approximately 20yds/mtrs out.

We can get an idea of their appearance from the sketch below, showing the standard Circular Pillbox of the British Army in the early part of the 20th Century. It was taken from the Manual of Field Engineering, 1936, and is used Courtesy of the Royal Engineers Museum at Chatham, UK. 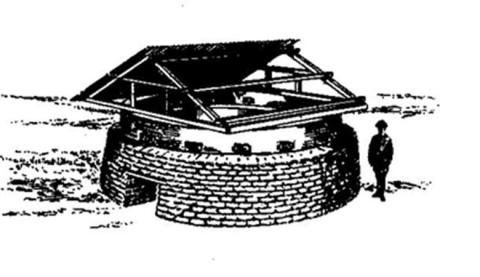 A variant, believed to be the type used in Hong Kong, replaced the rectangular roof with a circular type, referred to as a "mushroom roof". The Hong Kong design also added the surrounding trench and barbed wire fence.

The blockhouses in use

Their lifespan in the defence of Kowloon was short. Although perhaps physically still standing into the early 1920s, they were not considered in Defence Plans after that time.

The blockhouses were quick to construct, but as they lacked any concrete sections they were also quick to fall apart and blend back into the landscape once they'd been abandoned. The yellow markers on the map show the few sites where traces of the blockhouse have been found. The following photos record how several of these sites looked in the 1990s and 2000s.

The red markers on the map give the approximate location of the other blockhouses, as shown on a 1911 map. Some of these may also still have traces of their blockhouse, as yet undiscovered.

There is little known about the HK Blockhouses. The information we have is taken from:

Corrections and additional information are welcomed.

Further detail can be found in an expanded article by the author; Weir, R. (2012), "A Note of British Blockhouses in Hong Kong," Surveying and Built Environment, Vol. 22, No. 1, pp. 8-18 (the Journal of the Hong Kong Institute of Surveyors).

Thanks to Rob for sharing his research with us. You can read more from Rob in the Historic Military Buildings in Hong Kong section of the Gwulo website.

re: Building a blockhouse

Thanks Tim, great to see a photo of one of these at last!

Having just read Rob's 2012 paper too, I suspect he's going to be mildly excited to see the first image of a blockhouse in place. :-)
Just for information's sake, this is from an album of photos given to us by a near-stranger in Lincolnshire who, having learned of our strange affliction of collecting old group photographs, felt that the album would be better in our hands than hers.
It features almost exclusively photos of Hong Kong - the exceptions are clearly labelled - and this image appears 3 photos before pictures of a cricket match featuring the Royal Engineers dated Easter 1910. Given how well the album is collated and labelled, it would be reasonable to assume the photos predate this, but not by a huge margin.

Interesting photo. I note a road cutting on the opposite side of the hills. Probably one of the early roads into the then New Territories.

Thanks for that picture. Tai Po Road in the background?

This pic appears on HT Wong's flickr account under the title "1910s Lion Rock". If the title is correct then this is one of those in close proximity to Lion Rock, Number 20 or 21 perhaps, although there may be another/others further up the slope.

this is the view from the west so most likely #21

The caption on the original

The caption on the original photo reads : “On Top of Mountains Kowloon. Lion Peak & Old Blockhouse.” 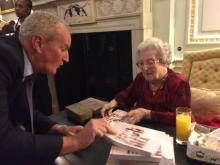