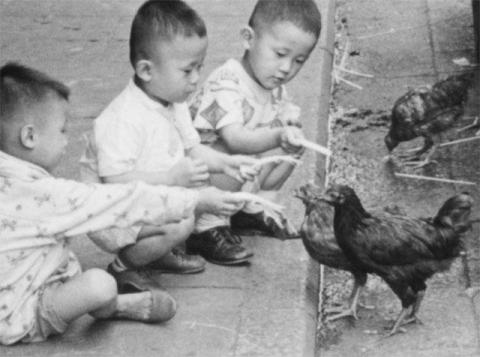 Where: A pleasant rural scene - or is it? Those shoes and clothes look far too tidy for life in the countryside...

Sure enough, the wider view shows they're in the middle of the city. 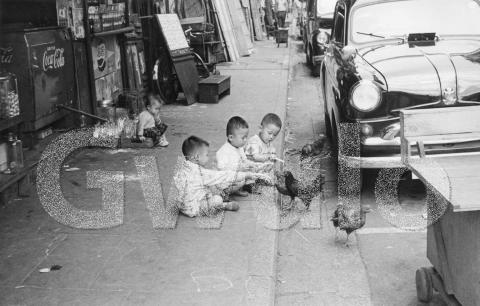 Any ideas which part of Hong Kong this might be? Further along the pavement it looks like sheets of wood are stacked outside a shop, but I can't see any signs that can pin down the exact location.

Who: Apart from the three young farmers, there's also a younger sister in the background. She's watching them from a distance, but it's not clear if she's: nervous of chickens and keeping a safe distance; been entrusted with guarding the empty bottles; or that big brother has told her to stay away - "This is man's work!" 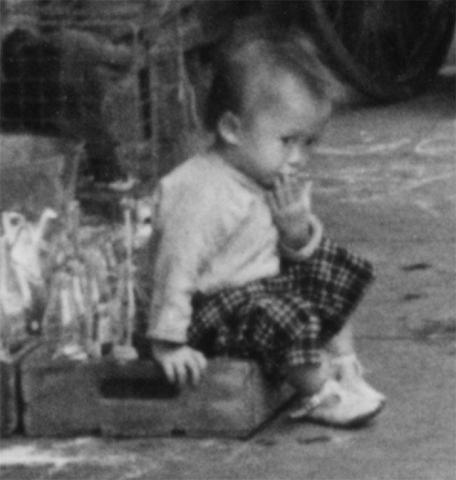 When:  Looking at the clothes and cars. I guess the 1960s, but please let me know if you have a better estimate.

Here's a close-up of the car in case you can identify the make & model: 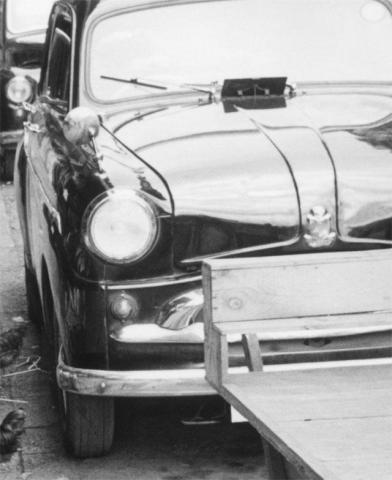 And if we have any collectors of soft-drinks memorabilia reading, perhaps the design of the Coca-Cola and Pepsi coolers can help? 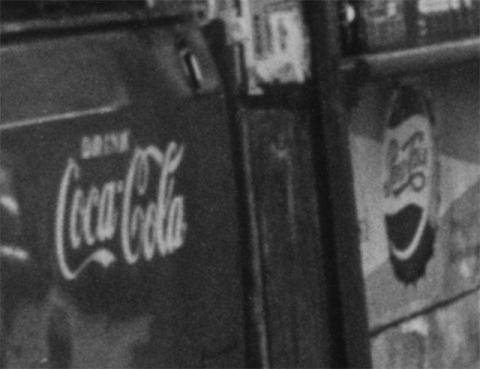 What: Chickens! What are they doing here on the street? 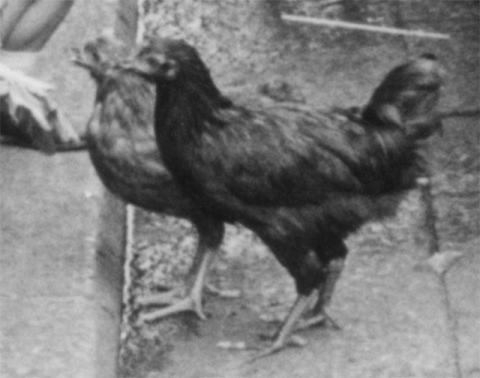 I don't think we've stumbled on an urban chicken farm. They're more likely very recent arrivals, enjoying a final meal before being dispatched to the kitchen and then the dinner plate. Hong Kong likes its chicken fresh!

[A 2015 survey asked 1,000 Hong Kong residents whether they preferred to buy chickens live, freshly slaughtered, chilled, or frozen. Although roughly a third (32%) had no preference, almost half (47%) said live was best.]

Today you can buy a live chicken at the wet market, but it has to be killed there before you can take it home. When this photo was taken, in the days before bird flu, it was more common to take the live bird home with you.

My wife remembers her mum would insist on live chickens for the Chinese New Year meals. She also remembers (is never allowed to forget!) the year they went without. It started off as usual, with the perfect live chicken chosen (a sight to see, as it involves blowing the chicken's bum to separate the feathers and check it's got enough fat) and brought home to the flat. A length of string tied one of its feet to the bunk-bed frame so it couldn't escape (the family lived in one of the 7-storey housing blocks, where standard practice was to leave the main door open during the day).

My wife, then aged about 7 or 8, was sweeping the floor when she noticed the string had come loose, meaning chicken and bed were no longer connected. A few attempts to catch the chicken just succeeded in chasing it out the open door and into the open passageway shown in the photo above. In a turn for the worse the chicken jumped up on to the passageway's outer wall. What to do?

Quick action was called for. She still had the brush, and decided a swoosh in the right direction was the best plan: knock the chicken back down to the floor and within easy reach. As you've likely guessed, the swoosh of the brush instead sent the chicken over the edge and gliding down from the fourth floor to the playground below. It survived the flight, and was last seen walking away into the distance - and no doubt into someone else's wok!

The car in the photo

I think that the car in the photo is either Standard 8 (introduced in 1953 and in production to 1959) or a Standard 10 with a more powerful engine (introduced a year later and produced until 1961).

I think the scene is a staged one with the children wearing their 'best' shoes whilst playing with the chickens on the pavement. Thinking late 1950s. The Year of the Rooster was in 1957!

Greetings.  I suspect the chickens were accidentally let loose from a shop.  In the mid-1950s, my grandparents kept chickens (bought when small) on their level-3 walkout balcony in medium size cages.  They were concerned about rising food prices.

To relive those memories, years later, I bought two dozen newly-hatched chicks and raised them in my backyard.  Once they know you, they become tame as in this photo.  Letting them out of their coop was their happy hour.  They followed me when I  cultivated the soil with a rotor-tiller.  Not afraid of the engine noise, they went for worms which were plentiful.  Obviously they were happy, for two days later, they all laid huge eggs with double yolks.

This photo was taken apparenly on a one-way street with post-WWII buildings, and, with a parked car, it could be in the TST area south of Austin Road, but most likely somewhere in Hong Kong island.  Regards,   Peter

Thanks for the car identification, here's a web page with photos confirming the match: http://www.oldclassiccar.co.uk/standardten.htm

I guess if it was a posed photo the photographer would have got closer, but it's certainly a possibility. Those young boys would now be in their sixties, so maybe we'll be lucky enough to hear from them. 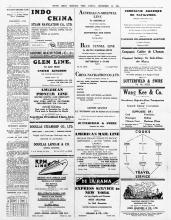