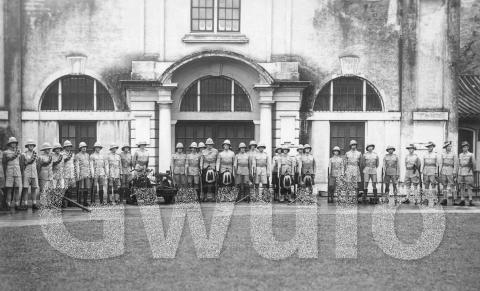 Where: This is a distinctive building, so it's an easy one to identify:

It was the headquarters building for the Hong Kong Volunteer Defence Corps. It was built on the patch of ground above St John's Cathedral, where the east wing of the Central Government Offices building stands today.

Who: As the building suggests, these are some of the Volunteers lined up for a group photo. They're split into groups, eg the central group has several men in kilts: 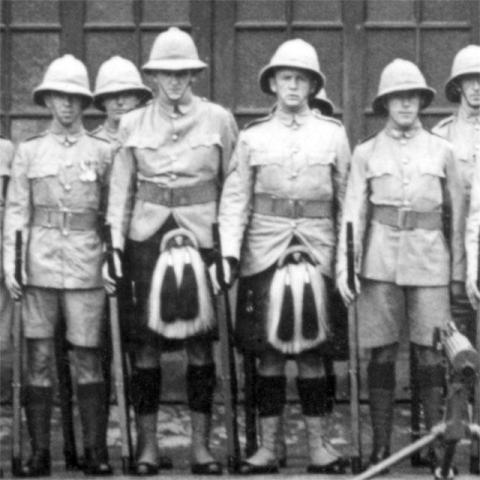 If we knew how the Volunteers were organised it might tell us more about who we're looking at.

Tony Banham's website lists the Volunteers as they were in December 1941, and says that their Infantry Companies consisted of the following groups:

Is that central, kilt-wearing group part of the "No. 2 (Scottish) Company"?

Then look right from the men in kilts, and the next four have a different facial appearance, possibly members of the Eurasian or Portuguese Companies? 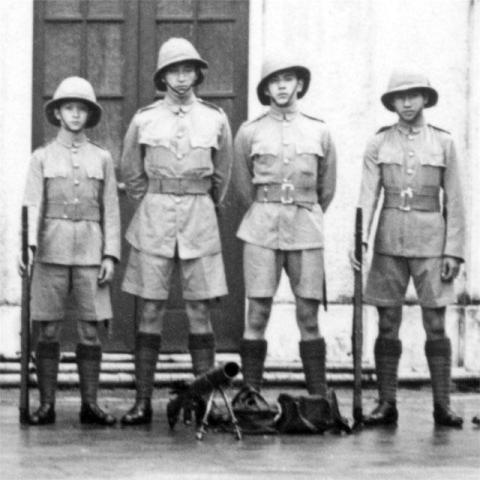 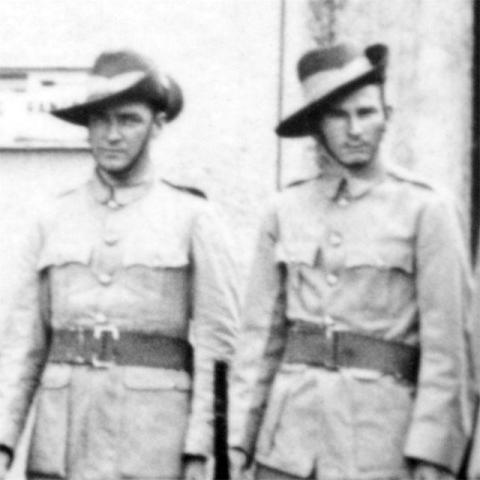 They're known as "slouch hats" and are part of the Australian soldier's uniform. There aren't any Australians mentioned in Tony's list, so maybe the photo is from an earlier time?

Soldiers from Australia and New Zealand are often grouped together under the term Anzac. It turns out there was an Anzac company in the Volunteers in the 1930s:

"The ethnic basis of some of the units in the Hong Kong Volunteer Defence Corps was reflected in the Schedule to the Volunteer Ordinance of 1933 which listed the units including the Scottish Company, the Portuguese Company and the Anzac Company.

The Anzac Company was formed in 1932 and was designated No.3 (MG) Company, being the third machine gun company to be formed in the HKVDC. It lapsed in 1935, but continued to exist on paper and was soon revived, although no longer identified with Anzacs, and the HKVDC Year Book for 1936 gives a nominal roll for it. Suggestions were made that it should be named the Eurasian Company, and this is the name which subsequently became popular although it seems not to have received legal backing. On mobilisation in December, 1941 most of the members of this Company were from the Eurasian community."

That sounds a better fit, so I'm guessing we're looking at members of the Scottish, Portuguese, and Anzac companies.

What: Other clues to who we're looking at come from the guns and other equipment shown. eg over at the left, the men all wear bandoliers. Any suggestions what the bandoliers contained, and which group these men belonged to? 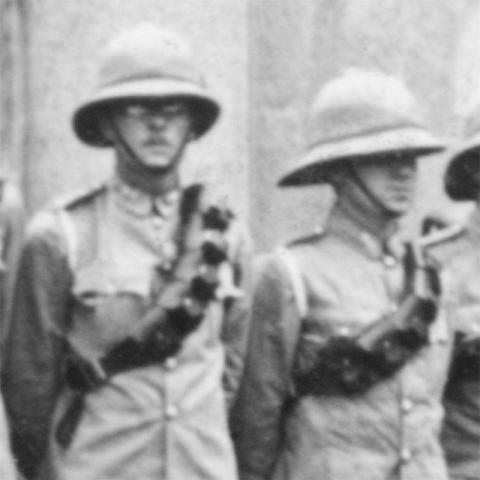 Next is a motorbike, with a Vickers machine gun mounted on it. 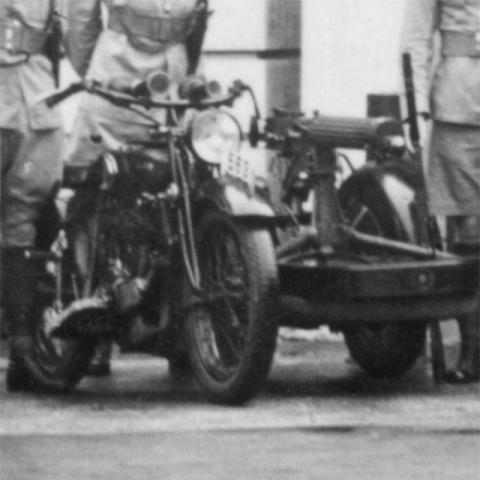 Based on previous comments from readers, the men who operated this were members of the Mobile Column:

"My father John (Sconnie) Sloan, born 1913, told me many years ago that when was in the Volunteers he was in what he said was the motorcycle machine group. He said that the plan was to race out on side car bikes to prepared mg emplacements in Kowloon and then to fall back to the next ones till they crossed over to HK. Luckily for me the idea was scrapped, he said by Maltby. He was then assigned to the defense of North Point power station where he was an engineer.

If this had happened I am sure I would not be writing this now!

Hope this helps. Not fact but hearsay."

The HKVDC had, in 1937, 12 BSA motorcycle combinations with Vickers Medium Machine Guns (rider, and assistant who sat in the sidecar to use the gun) and 12 ordinary motorcycles. It was referred to as the Mobile Column, and appears in the 1941 Defence Plan with 4 of the combinations to operate on the Taipo Road in the vicinity of Tai Wai, and 2 operating on the Castle Peak Road in the vicinity of Ha Kwai Chung. On the planned withdrawal, all 6 were to operate in the Sham Shui Po area. As the plan was subsequently modified with the later arrival of the Canadians, and the use of a second Battalion on the Mainland, I don't know whether the combinations still participated."

The main photo shows two more Vickers guns, this time just standing on the ground. They point to a Scottish connection again, as we've previously seen a photo of No. 2 Company with a Vickers gun, manning one of the Machine Gun posts around Hong Kong's coastline:

(I'm not clear whether the three Vickers guns shown here all belonged to the No. 2 Scottish Company, or if the Mobile Column was a separate group.)

The gun on the right is much smaller. 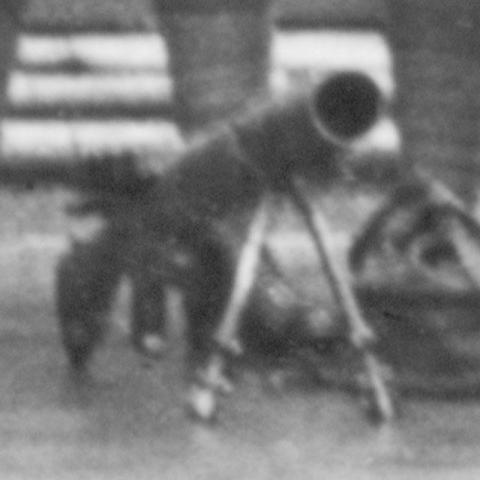 It looks to have a very wide barrel, so I couldn't work out what it might have been. Fortunately I had a chance to describe it to Kwong Chi Man, an expert on Hong Kong's armed forces. He identified it as a Lewis gun.

Lewis guns were often used as defence against aircraft, so perhaps this is the group that evolved into the 1941-era "No. 6 (Portuguese) LAA Company"? (LAA = Light Anti-aircraft).

When: Unfortunately there aren't any notes on the back to help identify the photo's date: 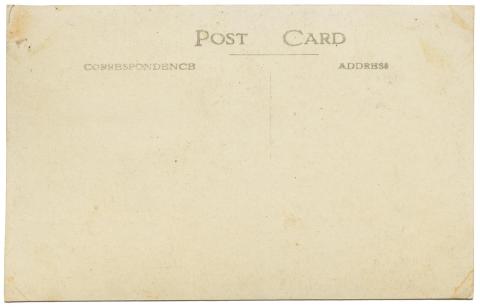 We can see that it was originally produced as a postcard, but it was never mailed so no postmark clues either. Marks on the corners suggest it was mounted in a photo album, but it was sold as a single card without the caption or any other information from the album.

No clues there, so it's back to the scene on the front. If we assume it was taken between the dates of the formation and disbandment of the Anzac company, that'll date it to the early 1930s. Confirmation came from another stroke of luck - while describing the Lewis gun to Chi Man, he reached for a copy of Philip Bruce's book, Second to None: The Story of the Hong Kong Volunteers. As he flipped through looking for a photo of a Lewis gun, we found the book has another copy of this photo! It's a wider view, with more to see at either side, but it's definitely a photo of the same event. The key point is the book's caption, saying that the photo was enclosed in a 1930s Christmas card.

I'm no expert on Hong Kong's military history, so I hope you'll help correct and expand on the above.

I'd also like to put names to as many of the men as possible. Two are wearing medals that might help identify them: 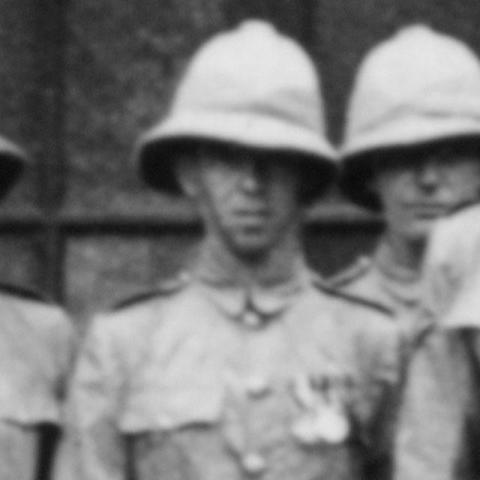 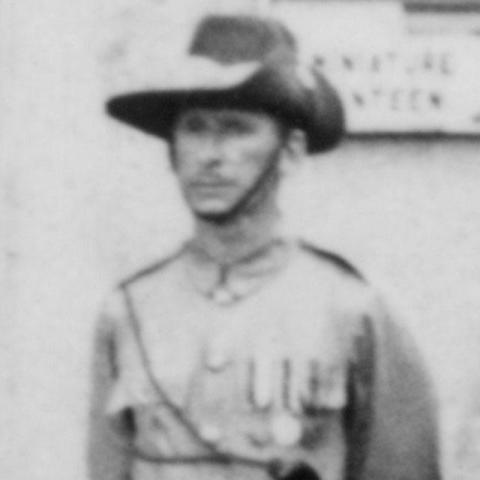 I found an early mention of

I found an early mention of the Anzac company on the front page of The Hong Kong Telegraph, 1932-04-29:

No time has been lost in completing the preliminary steps in connexion with the formation of an "Anzac” Company of the Hongkong Volunteer Defence Corps. Since the recent dinner, twenty-eight men have been sworn in at Volunteer Headquarters and it is confidently anticipated that this number will be increased in the near future.

The Company will be issued with distinctive uniform, and a cable has been sent to Australia for a supply of slouch hats characteristic of the Australian Imperial Force,

It is hoped to have the Company fitted out in time for the parade to be held on the King's Birthday.

It shows that the slouch hats weren't in use when the article was written, so the photo must have been taken later than April 1932.

Thanks to Lisa Ride, who writes:

The photo of the bandoliers
These would have contained Lee-Enfield .303 stripper clips

A Google search shows the stripper clips were clips that held five bullets, and were used to re-load the rifle's magazine.