A good summary of this company's history comes from Carl T Smith's article "The German Speaking Community in Hong Kong, 1846-1918". Some highlights:

There are further notes and a couple of photos in the 1908 publication, "Twentieth Century impressions of Hongkong, Shanghai, etc.". 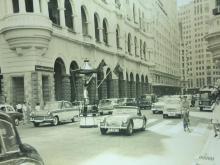