Mentions in the "Education" chapter of the annual Blue Books.

It is first mentioned in the 1883 Blue Book, under the "Grant-in-aid Schools" section of the "Educational" chapter:

It was the fifth Baxter Vernacular School. (Vernacular meant the lessons were taught in the local language, ie in Chinese instead of English.) The other four schools had opened in previous years, so by 1883 they already had 40-60 students each. The four older schools were at High Street, Hollywood Road, D'Aguilar Street, and Saiyingp'un (sic.).

Looking at the following years' Blue Books, there are minor changes in the name of the headmistress and the number of students (scholars) attending, but the next big change is in 1890.

The 1890 Blue Book lists a second Baxter Vernacular School on Bonham Road, but with only 12 students where the original school is shown with 30. The language of instruction for both is given as "Chinese", but I think that was a mistake. In the 1891 Blue Book and later years, the first school is shown teaching in Chinese, but the second is shown teaching in English. (Confusingly, it is still listed as a Baxter Vernacular school, despite teaching in English.)

The next change is the 1901 Blue Book, where the Remarks for both schools change from the earlier:

Baxter Vernacular Schools, under the management of the Society for the Promotion of Female Education in the East.

Then from the 1904 Blue Book they are both listed as "Fairlea".

There are more changes in the 1905 Blue Book. The "Religious Denomination" column that previously showed "Church of England" changes to "Church Missionary Society", and the Remarks also change. For the English-language Fairlea they read:

And for the Chinese-language Fairlea they read:

The next surprise is in the 1935 Blue Book, which shows boys attending Fairlea for the first time: 23 male students out of a total roll of 200. Was it just a clerical error? The 1936 Blue Book shows Fairlea as an all-girls school again.

That was the last Blue Book that mentions the school, as the 1937 Blue Book shows a new school, Heep Yunn. Fairlea school merged with the Victoria Home and Orphanage to form Heep Yunn School, at a new campus across the harbour in Kowloon. 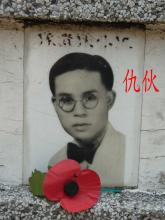