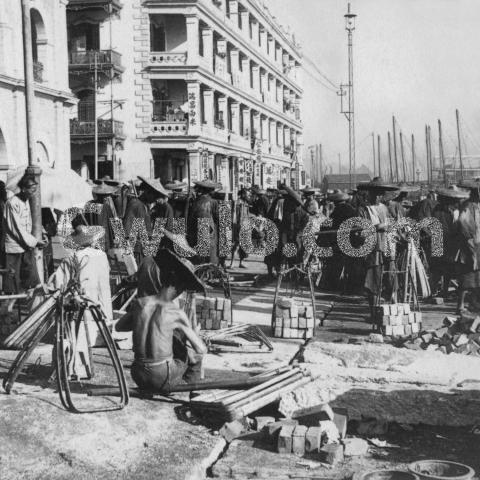 When: This photo is taken from a stereoview card, dated 1896: 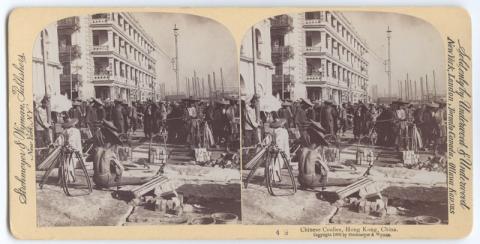 Where: The line of masts along the right of the photo shows we're on the seafront, or Praya. 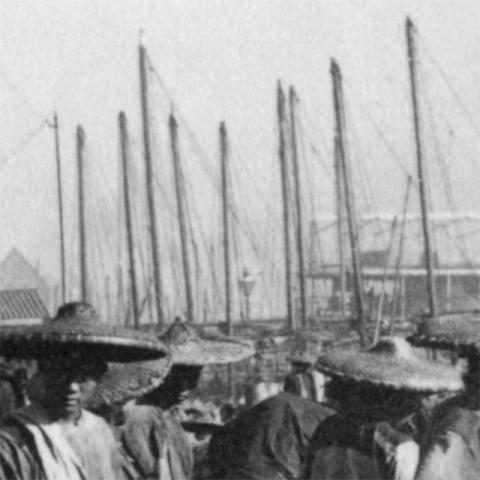 We know the 1896 seafront ran along Des Voeux Road, but which section are we looking at?

There's a clue in the line of the buildings on the left. See how it ends abruptly? That marks a corner where the road turns out of sight to the left. Maps show two candidate corners, one near Jubilee Street and one at the junction with Rumsey Street.

The corner near Jubilee Street seems more likely, and the arches on the building in the left foreground confirm it. 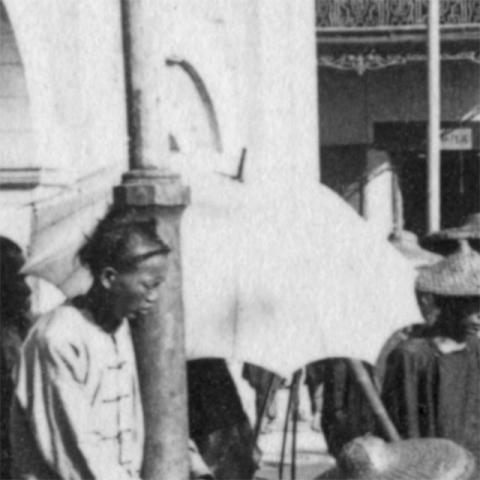 They were on the front of the Central Market building [1], the predecessor to the current Central Market. Here's a later view of these buildings: 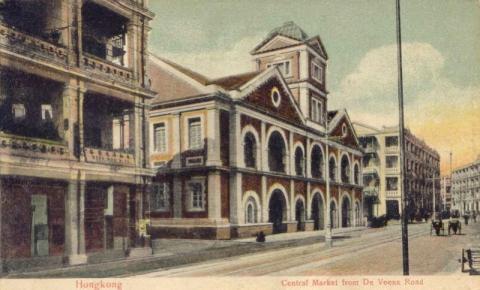 Who: This area employed a lot of manual workers to load and unload the boats that moored along the sea wall. In front of the market building was a stone pier with steps that made access to boats that bit easier, so this location was even busier.

The pier was mainly used by boats delivering food to the market, but it was used for other deliveries too. In this photo, the group in the foreground are all working on a delivery of bricks. 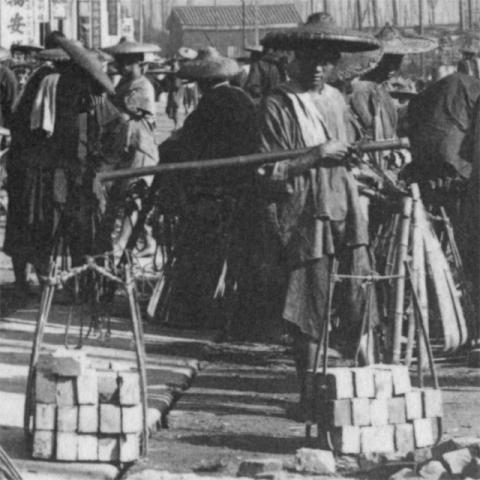 That man has his carriers loaded and ready to go, while others are loading up: 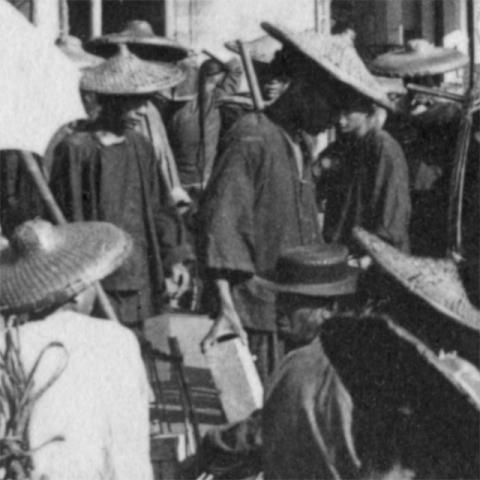 And there are plenty of spare carriers available if needed: 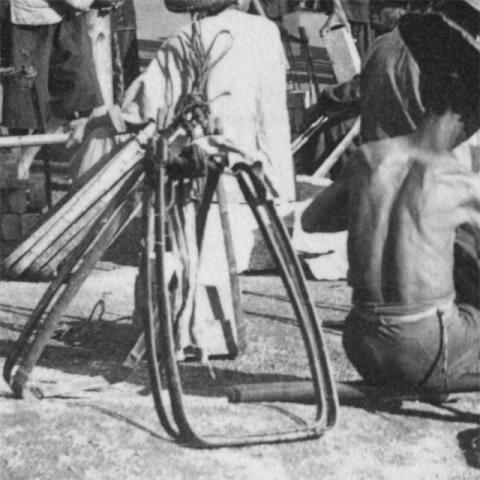 What: If you can read the Chinese characters, please can you let us know what type of businesses were running here? 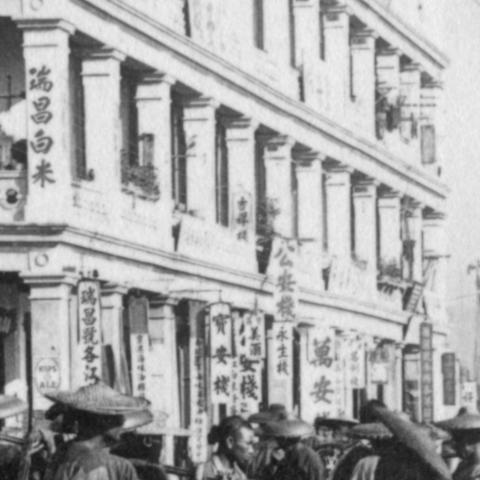 The only English words are this sign on the pillar that is closest to us: 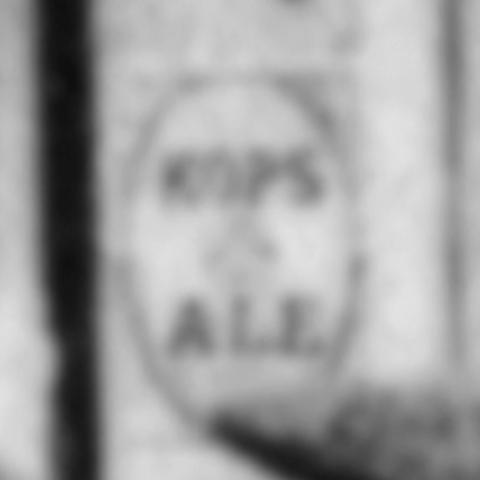 The shop sells "Kops Ale", a non-alcoholic drink brewed in Fulham, London, and shipped out around the British Empire [2]. It must have been new to Hong Kong in 1896, as it got a mention in the Hong Kong Daily Press in May that year:

At this time the Temperance Movement [3] was in full swing, so there was a ready market for non-alcoholic drinks like Kops Ale.

Prints of this photo are available to buy in the Shop.

The only signs that I can make out without doubt are the one on the top left, which sells white rice, and a short one in the middle of the photo selling wine (it just says 美酒 - great wine, without reference to Chinese or Western).  The others on street level have bottom bits blocked out by the throng, so they are hard to discern.  What I can see though is that almost every shop name ended with 棧.  Today, most people will understand a 棧 to be a shop that sells Chinese dried seafood and foodstuffs.

Can other friends spot other clues?

瑞昌白米<< It is a rice store

瑞昌白米<< It is a rice store

公安棧，寶安棧，永生棧，萬安棧。棧 can be a store or hostel

Re: stores with their names ending with the word 棧

I believe those stores with their names ending with the word 棧 are likely grocery stores.  Not in the sense of today's grocery stores, but daily necessaties for local Chinese population.  There were such concentration of them as they were close to the praya where goods were being unloaded from ships.  Some of the narrower verticle bords next to the store names detailed what they were salling.  I could not make out most of the words as they are blurred.  Some had already been identified by fellow readers as 美酒 (probably yellow wine from XiaoXing紹興, or the stronger distilled stuffs from all over the country) & 白米 (rice).  I could make out another phrase 海味, which means dried\processed sea food.

Greetings.   In my younger days, elders used the term "harc-jahn" which corresponds to "visitor/guest-inn/hostel".  These companies  took advantage of their close proximity to the praya to set up retail shops, and at the same time, I believe, provided beds to shippers who stayed in town, hence "jahn" became part of the company name.    Regards, Peter

re: Hostel and Grocery Stores

I also had a reply by email from TW Wong with the same explanation:

L side of photo: The Chinese characters: Shui Cheung (meaning "auspicious") white rice - the signs at G/F and 1st floor levels; 4 signs at G/F level: Man On Inn (guest houses), the other 3, Bo On, Gung On and Wing Sang are all the same - inns (budget hotels).

Thanks for all your help, all clear now.