Escape from the Japanese

Published by Frontline Books, here's their introduction to the book:

Trapped in the depths of Japanese-held territory, it was rare for Allied prisoners of war to attempt escape. There was little chance of making contact with anti-guerrilla or underground organisations and no possibility of Europeans blending in with the local Asian populations. Failure, and recapture, meant execution.

This was what Lieutenant Commander R.B. Goodwin faced when he decided to escape from the Shamsuipo PoW Camp in Kowloon, Hong Kong in July 1944 after three years of internment.

With no maps and no knowledge of the country or the language, Lieutenant Commander Goodwin set out across enemy territory and war-torn China. Because of the colour of his skin he had to travel during the hours of darkness for much of what was an 870-mile journey to reach British India.

Few of his fellow prisoners gave him any chance of succeeding, yet, little more than three months later, he was being transported to the safety of Calcutta. For his daring and determination Lieutenant Commander Goodwin was awarded the Order of the British Empire.

Extracts covering the escape and the days immediately following can be read by clicking the link below.

Ralph Goodwin, a New Zealand naval officer had been a PoW since Dec 25, 1941.  For two and a half years he always had escape in his mind, and in Sham Shui Po camp he had prepared for it.    He realized that the location of this camp was the best he had ever had to make an escape. The proximity of the camp to the sea, meant that he could swim from the seawall, to a little habited part of the coast from where he could climb into the hills and make his way northwards to freedom.

Shortly after midnight, Goodwin quietly left the his bed and the hut in the camp with all the escape equipment he could carry, and in the darkness of a rainy moonless night, made his way to the fencepost, he had to climb.  This was the first of three electrified fences he had to pass.   With care he climbed up to a foothold on the top insulator.

"Then summoning every ounce of strength I straightened up, and stood clear of the electric wires. As quickly as possible I…

Goodwin did not have a watch, nor a compass, but at around midnight (June 17) he made his way up slope taking note of patrols below him that were probably looking for him.   As he went higher, gaps appeared in the clouds, and a few stars were visible. At last he had a chance to get his bearings.

"It was my belief that on the other side there would be a valley leading into Tolo Harbour, and after avoiding a building that might have been a guard-post I was deeply…

END_OF_DOCUMENT_TOKEN_TO_BE_REPLACED 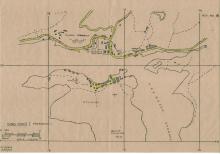