Two splendid moustaches to celebrate the start of Movember [1]: 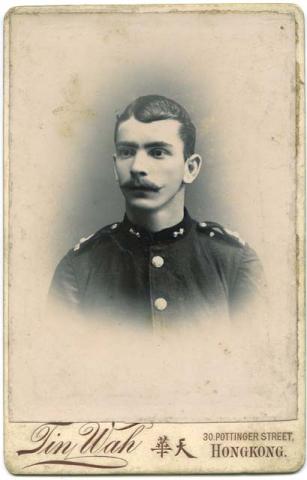 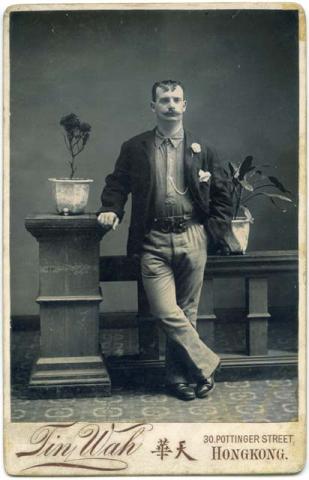 What: The photos are each stuck on to thick cards, measuring 4 1/4 x 6 1/2 inches. This was the most popular format for portrait photos in the late 1800s, and was known as the Cabinet Card.

Where: The photos were taken at a photographer's studio, "Tin Wah" on Pottinger Street.

Who: I don't have any background information about these photos, so what can we find out about them? 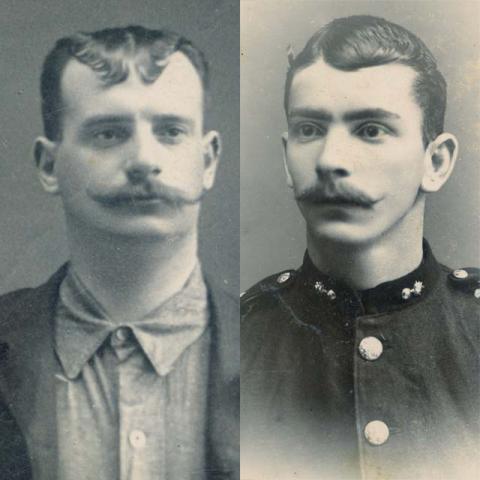 But I don't know what the connection was between them. The photos' previous home was an antique shop in mid-Wales, so they could have been photos of relatives, sent back home to family in Wales. Or perhaps they were photos of friends, carried back home by the owner when he finished his service.

The older man is in civilian clothes, which makes identification more difficult. There's also the fact he's in a photographer's studio, so he might be wearing a combination of his own clothes and props supplied by the photographer.

The younger man is in uniform, so hopefully he is a better source of clues. Can a knowledgeable reader identify anything from his buttons?

When: The Cabinet Card was in use from the 1860s til the 1920s, but they were most common in the 1880s and 90s [2]. Earlier cards used albumen photos, which typically have a colour tint to them. But these photos are closer to black & white, suggesting they were printed using a more modern process, and dating them to the 1890s or later [2].

I have't found any mentions of the Tin Wah studio yet, but if we could find which years it was in business, that will help narrow down the date.

Then fashions may give us more clues. First are those fine moustaches, and the slightly disturbing hairstyles: 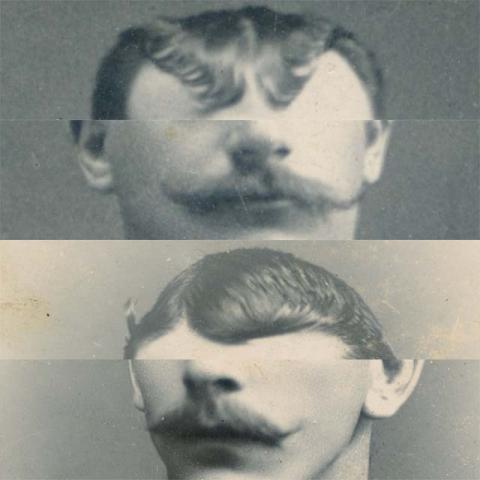 Beards and sideburns were the order of the day for mid 19th-century men, but from the 1880s til the 1910s they were shaved away leavng just the moustache. Then in the 1910s the moustache fell out of favour, and the clean-shaven look was the norm [3].

How about the hairstyles? Is their any (polite!) name for the older man's hairstyle I can search for? Or was that something he'd made up all by himself?

One last clue is his shirt front, where the opening at the front doesn't run down to the waist. Can any fashion historians put a date on that? 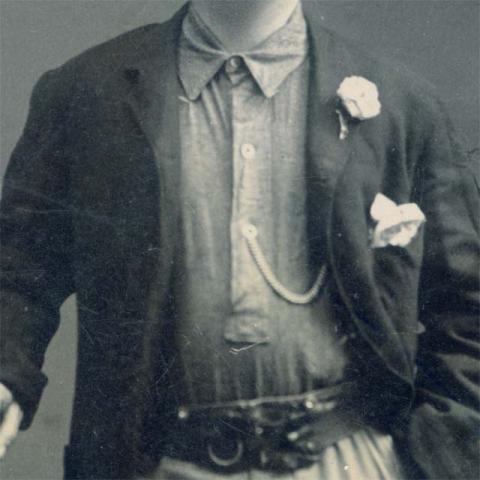 The clues all point to a date around the turn of the century, so I'll guess 1900 for now. Corrections welcome!

Of the badges worn by the man in uniform, the clearest to see is his left collar badge (right as we look at it)..To me it resembles the stylized "flaming grenade" worn by various Fusilier Regiments, the Grenadier Guards and other British military entities.

Next look at the letters on his right shoulder (left from our perspective). I think the letter nearest to us could be an "F". If so, this would fit with the man being a Fusilier.

David's dating of the photo to around 1900 corresponds to the 1888 or 9 to 1902 posting of the Royal Welch Fusiliers to Hong Kong. Looking again at the letters on both shoulder patches, could they be "R.W.F."?

The Royal Welch Fusiliers recruited mainly from North Wales, which can't be far from the Mid Wales source of the photos.

I don't have anything to say about the man in civilian clothes other than to draw attention to his rather unusual belt, or whatever it is, around his waist.

Thanks to GW, and also to Bill Griffiths, who replied by email:

I am certain that the Collar Badge shown on the one in uniform is of The Royal Welsh Fusiliers......which could be a connection with where the photos were found in Wales ???
The Buttons are not clear enough to identify.....but if the Prince of Wales Feathers are on them...then that would confirm it is RW Fusiliers

I just did a quick search for Welch in the newspapers around this time. The first match is from 1899 (appropriately on St. David's Day), and the last is on 17 Nov 1902, reporting on their departure. So that all fits well with the dates mentioned above.

For fun, I had a look into

For fun, I had a look into the hairstyles

What I have found seem to confirm the dates of 1890-1900 as most probable, in fact closer to 1900 from an actual barber instructor manual from 1900 (at least for the second chap)

In photo identification tips: hairstyles of the 19th century, under 'Men's Hairstyles 1890-1900':

Very short hair became fashionable. It was shaved up the sides and cut very short in the back. The slicked-back look returned, but the side part turned into a middle part. Sideburns and beards were gone, but the mustache remained as an optional hairstyle feature.

But under Men’s Hairstyles, Image 2, from Barber Instructor and Toilet Manual (1900) the photo of the man in Number 14 has the same peculiar curly hair and middle parting hairstyle and moustache fashion as the second chap.

Thanks David - those links

Thanks David - those links will be useful for future photos, too.