The ROBERT had sailed from Plymouth with her hold loaded with Radar updated with the latest modifications. These consisted of long range aircraft warning, enhanced surface detection, and an ABU (Automatic Barrage Unit) sited in the aft director. Navigational Radar, stabilized height finders and an Action Information Centre, along with a variety of electronic counter measures made the ROBERT by far the most electronically sophisticated ship in the RCN. This, along with further enhancement of her main armament, was installed during a lengthy refit at Burrard Dry Dock, Vancouver. In preparation for the Pacific war, the secondary arms were upgraded with power mounted Bofors and Oerlikons fitted with gyro sights. The crew were sent to Comox for commando courses. Shortly thereafter, the European war ended and the crew, who were almost entirely NRs or VRs, were given the option of demobilizing. Over 85% voted to see it through.

After a strenuous month of working up, the ROBERT sailed on July 4th for Sydney via San Francisco. At this point she became a unit of the British fleet and sailed through the Coral Sea to Manila where the task force was mustered for an attack on Hong Kong. The problem of re-occupation was not helped by the American reluctance for the recovery of British colonial territory. With this delicate point unresolved, the formidable task force of two fleet carriers, INDOMITABLE and VENERABLE, two cruisers, SWIFTSURE and EURYALUS, 14 destroyers, minesweepers, the eighth submarine flotilla and a hospital ship was assembled by the British admiral.

The force was mustered in Subic Bay, but by this time, the atomic bombs had been dropped and the Japanese had capitulated. Their empire was on its knees with all lines of communication cut. Hong Kong was isolated with a garrison of only about 15,000. Plans were changed and the ROBERT was given the option of going to Tokyo for the surrender, going to Formosa where trouble was brewing, or carrying on to Hong Kong. The choice was obvious.

Positions were taken up some twelve miles outside the harbour near the island of Kam Tan. Japanese representatives were brought off for conferences on the flagship and an agreement was made for the conduct of both sides upon our entry to Hong Kong. Rumours of an attack by Kamikaze torpedo boats were causing concern. None developed and, in fact, the ROBERT secured one and brought it back to Canada as a museum piece.

The ROBERT was the fifth ship to enter and after a very cautious examination of the Kowloon dockside, tied up on this mainland shore, the sole vessel to do so. Landing parties, which had been given such intensive training both in Comox and in passage were formed. When the ROBERT made fast to Holt’s wharf on the 30th August, there were shrieks of joy from the Chinese onlookers. This was mainly due to the powerful armament of the flagship which was in full view in the harbor.

Excerpt from Captain Creery’s report:
“The wharf was occupied by armed Japanese soldiers, who, contrary to the terms made a Kam Tan, were removing goods from the godowns and loading them into a small freighter alongside the wharf just ahead of the PRINCE ROBERT. We put our landing party onto the wharf and ordered the Japanese to lay down their arms, desist from loading the freighter and to leave the wharf. Trouble was obviously brewing; taking with me a very large AB armed with a Tommy gun, I landed to see what it was all about. The Japanese CO politely informed me that it was contrary to the Kam Tan agreement for his soldiers to be disarmed. I made some polite remarks about the freighter and for a few moments we looked at one another contemplatively. It was tense but finally his eye wavered and he gave the order for his troops to march off unarmed and proceeded toward a waiting car. We didn’t think much of that idea and told him that all cars on the wharf were commandeered. Again there was a pause for thought and an eyeball to eyeball confrontation but finally with a shrug, he departed.”

The Chinese started looting, thinking they could take advantage of the loss of Japanese authority. The landing party consisted of about 140, and of course, in any show of force against the current garrison was completely inadequate. However, an arrangement was made with the Japanese commander where his forces remained to police the town until relieved by more adequate authority. With due respect to the Japanese, they kept their side of the bargain in good faith and there was actually less trouble than when the regular British forces arrived.

Naturally the first thoughts of all were to release the Canadian prisoners who had been held in Sham Shui Po prison for 45 months. The landing party from the ROBERT were there first, and were met with scenes of wild enthusiasm from everyone.  The prisoners were emaciated and had suffered severe deprivation during their incarceration. However, thanks to the high standards of morale and discipline they had maintained while in captivity, they appeared to be in much better condition than anyone had reason to expect. However, it was a rough time for most of them when they attempted to re-enter the life style of Canadian eating and drinking. The crew of the ROBERT emptied their larders, their stores and their luxuries for these unfortunate men. On the whole, the matter of maintaining law and order in a city of 1,500,000 went rather smoothly, which was no small credit to the ROBERT’s crew.

The final surrender of Hong Kong took place on September 16th with Captain Creery as one of the signatories for Canada. On September 20th the ROBERT detached from the Pacific fleet and sailed for home via Subic Bay in Manila, where 59 Canadian former prisoners were picked up and transported home. The ship left Manila on September 29th, just avoiding a typhoon, and sailed for Pearl Harbor, thence to Esquimalt to arrive October 20th. On December 10th, 1945 the ROBERT was paid off and transferred to War Assets Corp. in January, 1946. She had steamed 22,000 miles on this last commission.

The ROBERT has probably steamed more miles, visited more ports and seen more countries than any other ship in the Canadian Navy during the war. It was truly nicknamed the “lucky,” being very vulnerable and travelling great distances in hazardous waters, yet suffering no real mishap.

The photos that inspired this tribute are from my dad's collection and many are Official Royal Canadian Naval Photographs offered to the crew of the Prince Robert. Picture orders were taken on board ship during the journey back from Hong Kong. They sold for approximately 10 cents apiece. I have included the negative numbers under each photo. Click on most of these pictures to see a full screen-size enlargement.

The descriptive text accompanying this HMCS Prince Robert Photo Gallery was transcribed from the Hillman Video Library Tape #59, which contains an interview with my father, Chief Petty Officer Robert Gerald (Jerry) Hillman conducted on August 28, 1982.  He died of cancer a few months later. He was reluctant to talk much about the war years... and there were so many more questions I should have asked.   I miss him...

Source (and of all following images) http://www.airmuseum.ca/rcn/

Text and images are copied by kind permission from the webmaster Bill Hillman.

More images from HMCS Prince Robert can be seen here. They have a better resolution, but cannot be downloaded.

Please can I check we've got permission to copy this full page of text from http://www.airmuseum.ca/rcn/prstory07.html. and several photos from http://www.hillmanweb.com/rcn/hk/03.html ?

If we have, please note 'Copied with permission' where you quote the source.

If we haven't, please either contact their webmaster to ask for permission, or let's think of another way to highlight this good information.

eg we could add an entry in the wartime diaries for this day, with a brief description of the ROBERT, and links to the article and photo album. That way Gwulo's readers can see what you've found, and we're less likely to upset the original owners of the content.

Permission to use materials from www.airmuseum.ca

you are of course right with being careful about copyrights. I am sometimes (hopefully not always) a bit unaware of problems that might occur. As you suggested, I asked permission to use the material from the webmaster Bill Hillman. He wrote me today: "Klaus: You have permission to share material from my HMCS Prince Robert Tribute site." I added a sentence stating that.

He also pointed out that I misspelled his name (Hillmann instead of Hilman - shame on me). I corrected all names below the images.

More interesting images from the end of WW II in Hong Kong ("Arthur Ball Wartime Pictures") can be seen on Flickr here.

re: Permission to use materials from www.airmuseum.ca

Thanks very much Klaus, and thanks to Mr Hillman too. I'll add an entry to the diaries now. 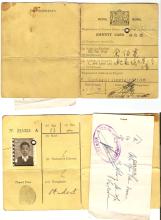