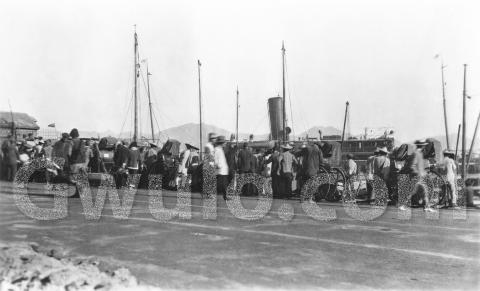 When: None of the men show any sign of wearing their hair in the braided queue, so the photo was taken later than 1911. 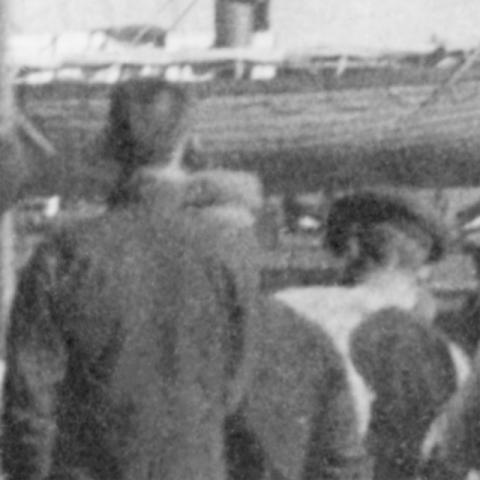 There's a man on the right who may help us: 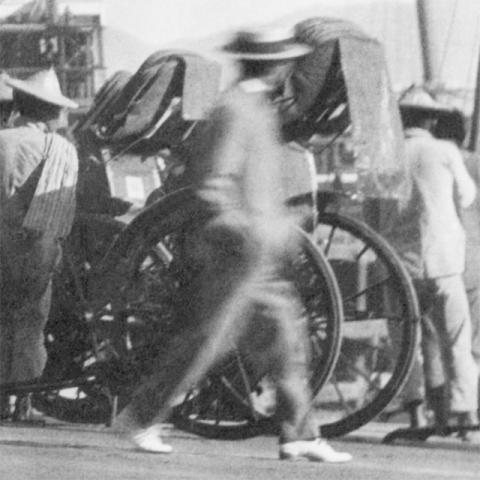 He's moving too quickly to see him very clearly, but we can make out his straw boater and light-coloured shoes. I found this description of when the straw boater was in fashion:

"The popularity of the boater reached its height during the period 1880-1930, though it was already in decline by the end of the First World War, after which it was eclipsed by the panama and the trilby." [1]

Where: Definitely on the north shore of Hong Kong island, as we can see Lion Rock just to the right of the funnel. Yesterday I took a photo of the skyline for comparison, as seen from Kennedy Town: 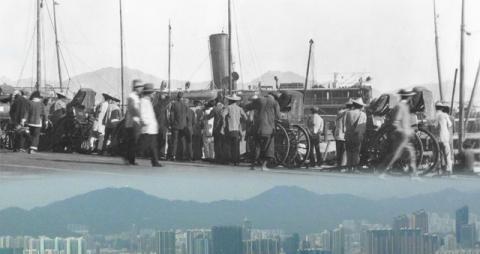 We're clearly on the seafront but we can't see any tram lines in the road, which suggests somewhere along Connaught Road. If that's right, the clue I think points to the 1920s is the rough ground in the bottom-left corner of the photo. It suggests the ground hadn't been built on yet, but by the end of the 1920s all the new plots along the reclamation had been filled in with new buildings.

Then where along Connaught Road?

At the far left is the entrance to a pier. Unfortunately the edge of the photo isn't very clear, but it might still give us a clue: 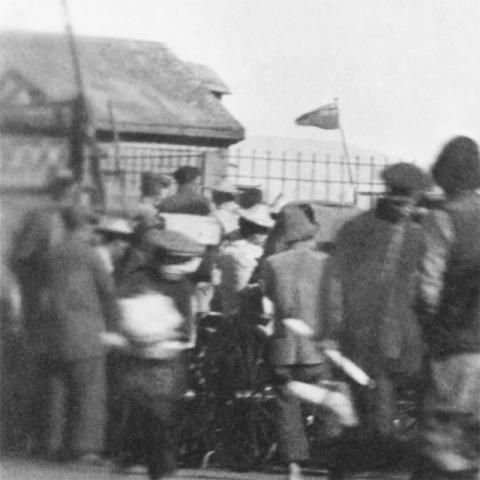 What: Can anyone recognise the ship in the background? It is flying three flags altogether, and though the one on the right isn't clear, we can make out some details of the left and centre flags: 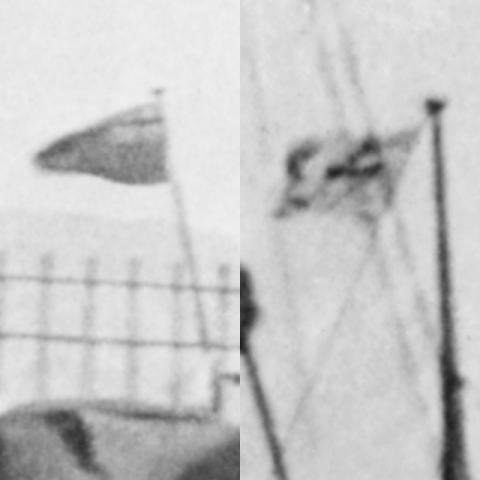 The left flag looks like the Red Ensign, which makes this a British ship. Does the second flag give you any ideas about the shipping company?

The other question I have about the ship is whether it is moored parallel to the seafront, or at right-angles to it. I've gone back and for between the two. I ended up highlighting the ship and the pier: 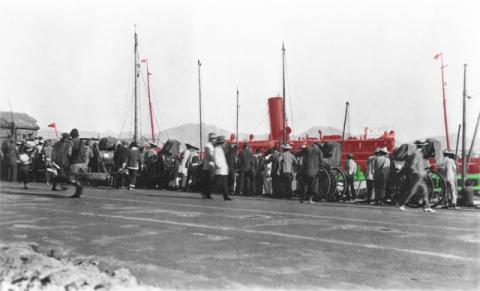 I think the ship is moored at the pier, and the pier is at right-angles to the seafront. It must just be the camera angle that has me confused. (I'd also wondered if the ship was sailing to or from the pier, and so was at an angle to it. But the ship can't be moving as there isn't any smoke from its funnel, so I gave up on that idea.)

Who: Many of the men in the crowd are rickshaw-pullers, watching for potential customers. 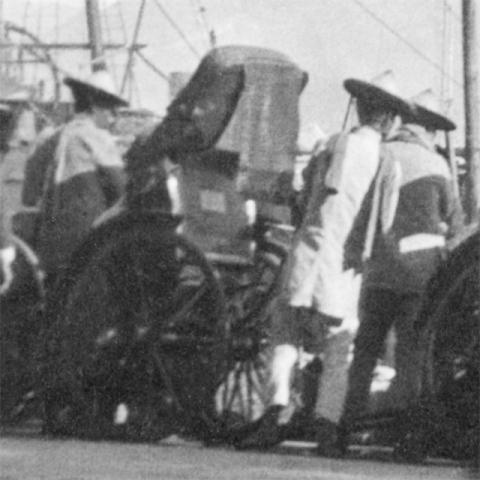 I'm not sure if the customers are coming from the big ship in the background though. The men are looking down at the smaller boats along the harbour wall. I think they're hoping for customers from those smaller boats. (We can't see much of the smaller boats, but we know they're there from their masts.)

I've ended up with more guesses than facts this week! Please leave a comment below if you can spot any good clues to firm up what we know about the photo.

Sean reminded me that John Olson wore a straw boater in this photo taken about 1917/18:

I think the old photo was taken from Connaught Road, Central.

Firstly, due to the direction the harbour wall faces. If we assume all the people are standing on the edge of the harbour wall, then it's facing somewhere south of Lion Rock in peninsular Kowloon, i.e. the photographer and the harbour wall must have been facing roughly north-east. The map at www.gwulo.com/atom/14601 shows the stretch of Connaught Road to the west of Blake Pier in Central initially faces this north-east direction, but then gradually curves away from Kowloon, facing north in Sheung Wan and Sai Ying Poon, and eventually north-west in Shek Tong Tsui and Kennedy Town.

Secondly, the hills in the distance. The three biggest are, from left to right;

- Beacon Hill, between the rear mast and funnel of the big ship.

- Lion Rock, just to the right of the funnel.

- Tates Cairn (I think), behind the front mast.

These three have a similar appearance when viewed from various places on Hong Kong Island. The key to where the old photo was taken from is the small triangular peak above the "w" in the gwulo watermark. I think it's Needle Hill, situated in the Shatin Valley. It's much further from Hong Kong Island than the Kowloon Hills, so its position in relation to them changes when viewed from different positions on the Island. The best old photo I can find with Needle Hill positioned in the same relative position as in David's old photo is at;

Taking the different angles into account, I'd say that it supports the idea of David's old pic being taken on Connaught Road in Central.

Like David, I'm confused by the apparent angle of the big ship and the piers to the waterfront in his photo. I can't identify the big ship, but note that its funnel appears to be painted in a single dark colour. The funnels of the ships of the Douglas Steamship Co. Ltd. were painted all black and used Douglas Pier situated on Connaught Road, Central so that's a possibility ( http://www.theshipslist.com/ships/lines/douglas.shtml ).

Thanks GW, looks like we're agreed on Connaught Road.

We might get lucky with the shed at the left of the photo. One distinctive feature is the small roof poking out from behind the main roof. I took a look through the photos we have (searched for connaught or praya), but didn't see any obvious matches. 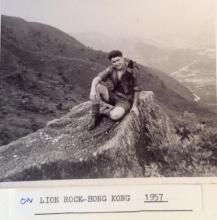