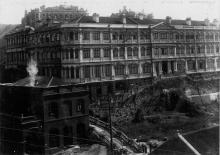 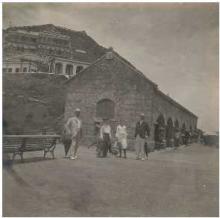 We've been sent this old photo of the Peak Cafe. It was taken in the 1960s, but the view is probably about the same as how Booth would have seen it in the 1950s. 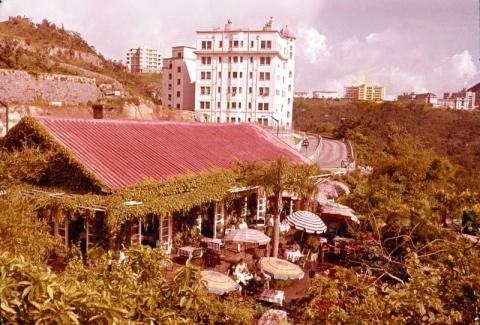 Wonderful photo. The white building in the middle, above Peak Cafe, is Peak Mansions, where I grew up. Wonderful old building, full of history and ghosts, and pulled down in 1990-91 to make way for the ghastly Peak Galleria. The remains of the old Peak Hotel are also visible to the left of Peak Mansions. Any chance of being able to get a copy of this photo of where I grew up? I would reimburse you, of course.

The source of this photo says it is a digital copy of a postcard, but that he doesn't have the original. You might have some luck searching on sites (eg ebay?) that sell old postcards.

this amazing photo shows cameraman looking down on the peak hotel. Some of the buildings on the left are still there (the peak tram building. Peak mansions are recognisable on the right)

Before the Peak Cafe

This photo appears on the display board on Harlech Rd next to the Peak Cafe. The building in the photo was used as a chair shelter and is the site of the current Peak Cafe. 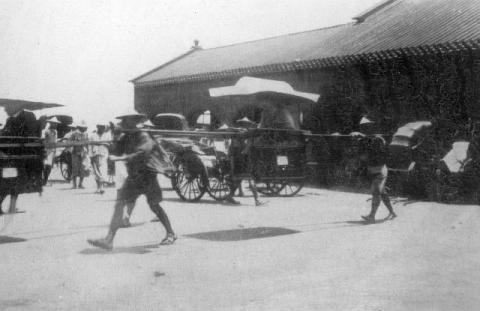 7-up floats and club sandwiches at the Peak Cafe.  A peaceful place where you could hear birds singing.  Peak Mansions was a wonderful block of flats and, if my memory serves me right, had a Dairy Farm downstairs where you could buy icecream.

Anonymous, thanks for all your recent comments. In case you hadn't noticed, there's a separate page about Peak Mansions you might be interested in, with more photos and memories.

Before it was a cafe

"12.―The chair shelter may be said to be a necessity from a humanitarian point of view. In the city, coolies can generally find refuge from sun or rain beneath the numerous verandahs and trees, and at Kowloon a shelter has been in existence for some years; but at the Peak, where the effects of the weather are much more severely felt than elsewhere, there is absolutely no protection whatever except what is provided by the present open matshed.

The Hon. T. H. WHITEHEAD―Before the new residence for the Governor at the Peak is gone on with would it not be possible to take in hand the chair shelter for the coolies at the Tramway Station? It is only a matter of $4,000.

The CHAIRMAN―I think the chair shelter is a work which will be completed before the Governor's Peak Residence.

The Hon. T. H. WHITEHEAD―The Governor at all events is provided with a dry shelter whereas the poor chair coolies are not.

As for the origins of the existing Old Peak Café (舊山頂餐廳), it is evident that an open-sided shelter was built in 1901-1902 by the Public Works Department (PWD) on this site for the accommodation of both public and private sedan chairs. On the other hand, it is believed that before the completion of the sedan chair shelter, the Peak Tramways had built on this site a workshop and a shelter for engineers responsible for the construction of the Peak Tram in 1888. On completion of the tramway the site and the building thereon was handed back to the government. The site was used as a shelter for sedan chair bearers until 1947, when the building was converted into an open-air cafeteria. In 1973 a public petition was raised to prevent redevelopment of the site and to save the building from demolition.

The Old Peak Café is a pitched-roof single-storey building built in the
style of an English country cottage. It is built in the style of architecture known as Arts and Crafts which was a popular style in the late Victorian and Edwardian periods. Externally, notable architectural features are the stone walls, arched windows, black-and-white half timbering to the gable and
prominent stone chimney stack. The use of Chinese tiles for the roof is a local adaptation. The low random rubble masonry boundary wall and the trees and shrubs in the garden complete the image of a picturesque rustic cottage.

Examples of Arts and Crafts architecture are rare in Hong Kong and the
Old Peak Café is an important part of our built heritage, although due to many alterations and improvements over the years its original appearance must have been changed somewhat.

As the 1973 campaign to save the café proved, the building has
sentimental and social value to many local people. Its rare style of architecture and rustic appearance blends in well with the surrounding environment.

Although adaptive re-uses could probably be found for the building, it has
a loyal clientele as a café and is likely to remain as such in the foreseeable
future.

Remarks: In view of its historical and architectural merit, the Old Peak Café was accorded a Grade II status by the Antiquities Advisory Board in 1981. 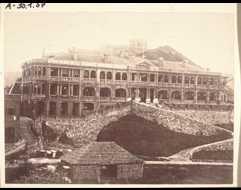 I worked as a waiter in peak cafe in the late 60 to early 70, while I was still attending school in Robinson Rd.

My parents worked in Plunkett's Rd. which commonly called France House as the property belongs to a French Banque.

The picture bring back a lot of schooling memory and the staff working in the Peak Cafe, I also remember the owner, the wife who married to a Doctor and her brother was a famous Barrister.

Thanks for all the wonderful

Thanks for all the wonderful memories which flood back.  I have only just subscribed to gwulo.  In the early 1970's I lived in Peak Mansions for a short time and then in "Cloud Ridge" in Plunkett's Road. I went back for a holiday in December and took new photos but I still think these "old ones" are better. My sister was convinced she saw the Peak Mansions ghost. We've just had a category 5 cyclone here in Queensland (Australia) which made me remember Peak Mansions during  Typhoon Rose. Soot came down the chimney and settled all over the walls and furniture.

re: Thanks for all the wonderful

Hi Catherine, glad to hear you're enjoying the old photos. I hope you'll share more memories with us as you remember them.

We've got some information about Peak Mansions, but nothing for Cloud Ridge. Please do you know which building has replaced it, so we can put that right?

These Government Quarters were built when the Navy gave back the site that was uses for the Admiralty Bungalow since the 1870's.  Government then found that the lease said the site was supposed to have been used for the health of the men, not the Admiral or the officers !

Thanks, I've made a place for

Thanks, I've made a place for Cloudridge.

69. Chair Shelter at Victoria Gap. - This building was fully completed early in the year. It is divided in two sections, one of which is for the accomodation of public chairs, whilst the other is for private chairs. The former is entirely enclosed, large sliding doors being provided along the front, whilst the latter is left open in front. A small latrine is provided in a corner of the building. The walls are of the blue stone obtainable in the neighbourhood, with granite dressings, and the floors are laid with cement concrete, the roof being tiled in the usual way. A space is left in front of the shed, clear of the road, on which the chairs can stand during fine weather. 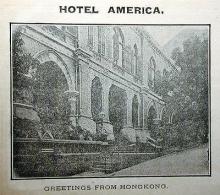