Probably built in the 1920s, No. 54 Village Road (山村道) is one of the oldest buildings in the district. It is a three-storey structure above a garage at street level. When it was built development restrictions limited the height of new buildings in the area to three storeys and only houses of European type were allowed. The early history of the building is rather obscure, but it is believed that the developer of No. 54 and adjacent lots was the United Land Investment Company Limited. The administrator of the Company was Mr. Ho Lui Hap (何侶俠). Probably due to loss of documents during the Japanese Occupation, it is difficult to determine the pre-World War II status of these lots. The earliest registered tenants of No. 54 Village Road were Chong Sing Ching and Kwok Hei To, who equally split the premises between themselves in the aftermath of the Second World War. In 1953, Mrs Chan Siu Sau Ying (陳蕭秀英) acquired the entire property and no further transaction has been recorded since then. No. 54 is built on a raised terrace with a garage built underneath. The façade facing Village Road is asymmetrical and it is possible that it is the remaining half of two paired semi-detached houses, the other half occupying the site of No. 56, now redeveloped and named Yue On Mansion (愉安樓). The architectural style of the house is Beaux Arts, a very rich classical style favoured by the Ecole des Beaux Arts in Paris. The front façade displays an elaborate vocabulary of classical features including imitation stonework in stucco, segmental voussoried arched windows, a Greek fret pattern frieze, a moulded cornice, a broken pediment and various decorations such as triglphs, tassles, moulded panels and dentils. Windows are transomed wooden casements divided into small glazing squares and appear to be original. The rear and side elevations are plainer with rendered and painted walls and regularly spaced windows. The front terrace has an elegant balustraded parapet wall to match the house. The roof of the house is flat with projecting chimney stacks. This style of architecture is quite rare in Hong Kong and No. 54 Village Road is a good example of it. It has therefore considerable built heritage value as well as historical interest. The authenticity of the interior is not known, but the exterior appears to have retained its original appearance. 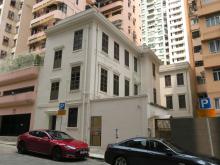 Looking at Google Maps, it

Looking at Google Maps, it appears the half of the house which has been demolished actually sat on no. 52 while the other half remains on no. 54. No. 50-52 is now an ugly multi storey apartment block called 'Way Man Court'.

I'm not sure which side was the missing half. With a bit of luck a good overhead view of the area will turn up and answer the question.

Night view of No. 54 Village Road.

I was the architect working on the renovation works for this interesting building, wanted to find out more about the history about this place, but it seems that there weren't many records available.

It's a beautiful building. Do

It's a beautiful building. Do any of the original features inside still remain?

yes, the interior is in fact quite intact.

For instance, there's a well preserved fireplace on each floor, all of the same made and type, and there's an emblem with "Three Lions" on it, very unique. I hope someone can give us some clues on why the "Three Lions". Could the place originally be homes to British Military personnels?

I can't think of any

I can't think of any connection between this area and the British Military, so maybe the lions are just decorative. Please could you post a photo of them? 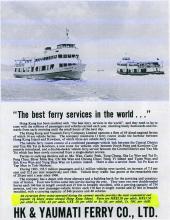 Round the Island excursion ferry