A short history of the Garden Theatre with ammendment in the comment section. 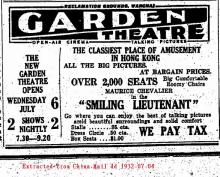 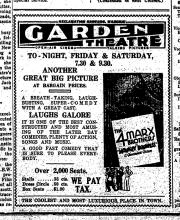 Thank you for posting the open-air "Garden Theatre".  It is nice to read Raymond's additional comments.  My search revealed that Garden Theatre was still in business as on Nov 4, 1932 as an advertisement also appeared on China Mail on that day.  It said that it would be the last two shows.  There was no more subsequent advertisement on Nov 5, 1932 and thereafter.  One can assume it closed down on Nov 5.  Please help me delete the closing date as of "early September".  Thank you.

I've updated the page as requested.

I recommend you make a "Place" page (http://gwulo.com/node/add/place) if you're gathering information about a building. It gathers all the information together on one page, instead of having it spread across multiple photos. It also lets us record the location, so we can use it on maps like this map of cinemas in Hong Kong:

Keep up the good work of adding interesting photos & stories,

Appears the Company went into bankruptcy. The Garden Theatre was also known as the Lok Yuen Open Air Cinema Theatre.

(Edit, February 2, 2018) The above Chinese name was taken from the Wikipedia source.  A comment in the Cinema Treasures site dated December 17, 2017 called it 樂園露天電影院.  Regards,  Peter

Representing an innovation, so far as Hongkong is concerned, in motion picture theatre construction, the new Garden Theatre at Wanchai reclamation has been completed, and will open on Wednesday night at 7.30 when a gala performance of “The Smiling Lieutenant”, featuring Maurice Chevalier, will be screened.

The construction of the theatre represents the latest design as embodied in similar open-air theatres in Southern California, tropical Australia and Java. Mr. V. Hugo, the proprietor of the Garden Theatre, has had several years experience in the motion picture world in Shanghai and Java, and is convinced that the open air type is the only one practicable for countries which, during the major portion of the year, have a climate of excessive heat, such as is being experienced in Hongkong at the present time.

The theatre is entirely roofless, thus ensuring the circulation amongst the audience of pure, fresh air, and a maximum degree of comfort even in the hottest weather. Adequate arrangements have been made to guard against a sudden downpour of rain, for by an ingenious arrangement of wires and pulleys, a huge waterproof roof can be pulled over the theatre in less than one minute. By a somewhat similar arrangement the screen, which is housed back-stage can be pulled backwards and forwards.

There are three means of access to the theatre. Patrons of the cheaper seats enter by side doors, and are entirely isolated from the patrons of the cane lounge seats, which are placed upon a raised platform at the rear of the theatre. The seats are large and comfortable.

The interior is tastefully decorated along the sides with hundreds of trees and ferns, which lend a tropical appearance to the whole theatre. Beflagged and lit by thousands of electric bulbs, the theatre gives a welcome dash of colour to the surroundings – colour that is so often lacking in Hongkong.

The talkie apparatus represents the latest mechanical skill of one of the leading manufacturers. At a test performance at which a representative of this paper was present one day this week, the sound reproduction was perfect, and equalled anything yet heard in Hongkong. No special acoustic difficulties are involved in an open air theatre, and unlike theatres which are entirely closed in, it is immaterial, as regard acoustic balance, whether the theatre is crowded or half empty.

The Garden Theatre will open at 7.30 p.m. on Wednesday, when Maurice Chevalier will be seen in “The Smiling Lieutenant,” an Ernst Lubitsch production.

Two performances will be given each evening, at 7.30 and 9.20. Following “The Smiling Lieutenant”, which will be screened until Saturday, “Africa Speaks” will commence a season. 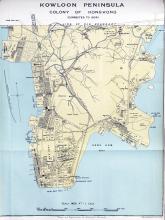