Lutherans on the Yangtze

Written by David G, Kohl, this is subtitled "A Centenary Account of the Missouri Synod in China".

It is published in two volumes.

Volume 1 covers the period 1913-1949. It concentrates on the missionaries' work in mainland China, though several pages cover the families who evacuated to Cheung Chau in 1937, and were later interned at Stanley by the Japanese.

Volume 2 covers the remaining years, 1949-2013. It starts with the missionaries leaving China as the Communists took control. They arrived in Hong Kong, expecting their putonghua skills to be of little use among the cantonese-speaking residents. Instead they found Hong Kong, and especially the Rennies Mill area, overflowing with refugees who spoke putonghua. They set to work among them. The bulk of this book covers the Lutheran Mission's work in Hong Kong, though there are also chapters on Macau and Taiwan.

Both volumes are available for purchase on Amazon: 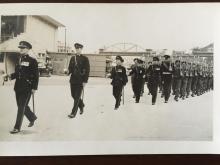