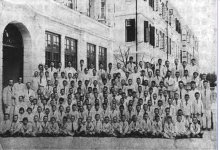 Basically, Nos. 16-17 Fung Fai Terrace (鳳輝臺) are identical in shape and
they have remained as apartment houses for residential purposes until the
present. The houses were probably built between 1919-1920 as part of the
development of Happy Valley as a residential area. Fung Fai Terrace was
originally a piece of farmland by the hillside and subsequently converted into a
site for erecting apartment houses in the late 1910s. At that time houses had to
be of European style and were not allowed to exceed 35 feet in height.

Nos. 23-24 Fung Fai Terrace (鳳輝臺) are two semi-detached houses
which forms one building. The houses were probably built in the 1920s as part
of the development of Happy Valley as a residential area.

The 1923 photo of flooding of Wong Nei Chong village shows, in the background, the buildings on the lower terrace of Fung Fai Toi. 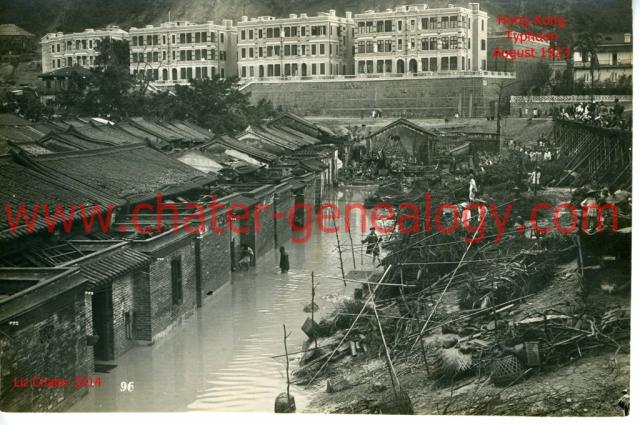 It happens that I also possess this photo and thanks to Dr Joseph Ting and collectors, its location has been identified to be Happy Valley, with the Chinese houses in the foreground being part of the Wong Nai Chung village (黃泥涌村) which had since been demolished.  The western houses in the background belonged to Fung Fai Terrace (鳳輝臺) which still exists today.

Excellent, many thanks for identifying this image.  I also have the racecourse at Happy Valley under water following this typhoon, I shall be posting that soon along with the remaining typhoon images.

The most serious effects of the rainfall was felt in Wong Nei Chong Village with some parts of the village under five feet of water. Owing to some reclamation works that is in progress, a bank has been thrown up in front of the village, which now lies in a hollow.

Newspaper photos of the damage caused to Wong Nei Chong Village can be viewed in the China Mail and Hong Kong Telgraph dated 1 and 8 September 1923 respectively.

However, I also possess a set of photographs from the 1923 typhoon (on 18 August 1923) with picture of the sunk L19 submarine (thus confirming the date of the typhoon) and pictures of huge fallen trees, landslide and severe flooding in many places in Hong Kong Island (and a few look like Happy Valley). Thus at this stage I think we cannot rule out the theory of the Happy Valley and Wong Nai Chung flooding being caused by the 18 August 1923 typhoon.

Of course, as the two events were only separated by 10 days, maybe the albums (that are possessed by Liz and myself) combined photos from the two events?

Reference the torrential rains on the night of 28 August and morning of 29 August that caused the flooding of Wong Nei Chong and Happy Valley Racecourse, the following information is provided:

Hong Kong has been lucky for once in the matter of typhoons. The No. 5 Signal was lowered and according to the Observatory report issued at 11:30 am today (28 August), the typhoon is filling up to the north of Hong Kong. The forecast is SW winds strong and moderating, overcast with occasional rain.

Last night it was very gusty and heavy rain fell causing some anxiety to Peak residents whose houses are still under repair due to the big typhoon on 18 August. Shipping went to shelter before dusk. but happily the Colony did not experience a heavy 'blow'.

The Observatory issued the following warning to Hong Kong and coastal ports on 28 August:

ii) typhoon within 25N and 114E (about 180 miles due north of HK and inland), filling up and position uncertain.

I would suggest that the photos in possession that have captured significant events during the period from 18 to 28 August 1923 were from different  typhoon events.

Thanks again Moddsey! Your information clearly shows the long episode of successive typhoons and heavy rain during 18-29 August, thus it is indeed plausible that photo albums did not distinguish the different events and label the photos collectively as 1923 typhoon.

If I may, would it be possible for you to upload the newspapers with photos for the episode? That would help put the different images into better perspective.

Re: Uploading of Newspaper Photos

The B/W images from the HKPL are not the best and not very clear for uploading. I would suggest readers view the newspaper photos of the typhoon events of August 1923 at the HKPL from here onwards.

The buildings were in pairs.  From the right of the photo was the block containing Nos 1-2, then Nos 3-4, then Nos 5-6, then Nos 7-8.  Between Nos 4 and 5 was the passage way leading to the steps to the upper terrace that was built later.

We lived at 9, Village Road immediately opposite No.5 and the steps leading up to the lower terrace, and that is where I was born.

So we can update the AAB report to say that 16 & 17 were built in 1923 or later, as the upper terrace is still empty in this photo.

Looking at Google's street view, I see that half of one of the older lower-terrace buildings is still standing, number 2, Fung Fai Terrace:

And the staircase, partially visible in the 1923 photo and opposite the house where Henry lived, is still here too:

According to the official history of lingnan, lingnan primary school moved to fung fai terrace in 1923. They rented blocks 4, 5 and 6 (another source says it was 4,5 and 7) until 1928 when they moved out. Here a photo taken at the time: 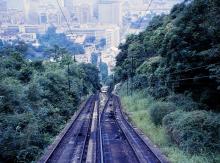