I was in Stanley this afternoon, and remembered there should be a pillbox around here. Sure enough you can see the square loopholes just above the shoreline. Here's the view across from Murray House. 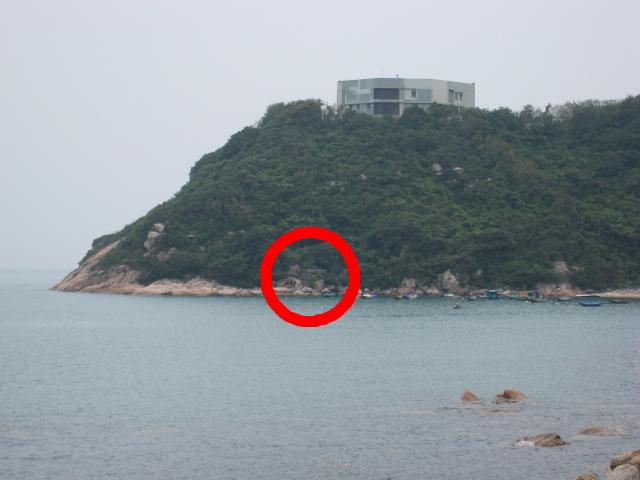 And here's a zoomed version. 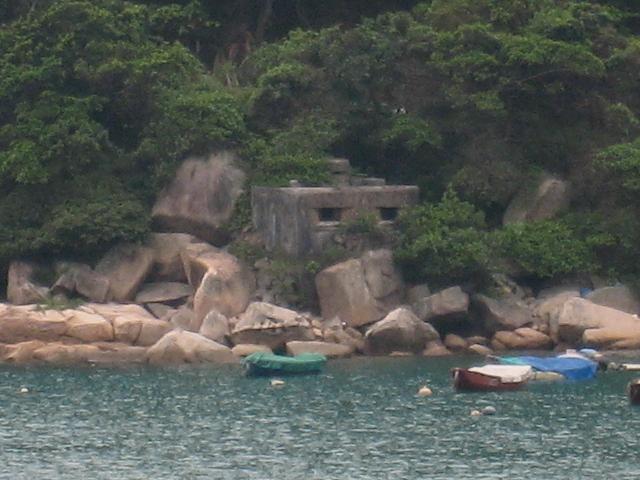 The design is similar to pillbox 21 on the other side of the peninsula.

Yesterday was a lovely sunny day, so I took the chance to see if I could get a closer view of this pillbox. It turned out to be an interesting one, with a combination of a bit of everything we've seen at the others.

Here's the view as I walked down towards the southern beach at West Bay. 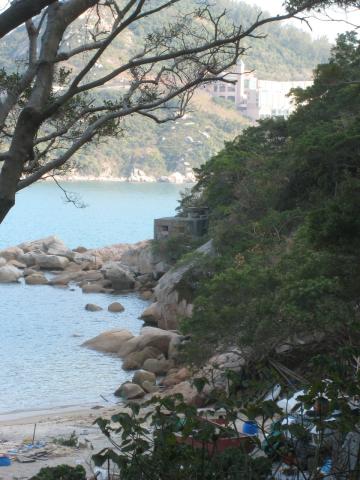 And as I started clambering across the rocks: 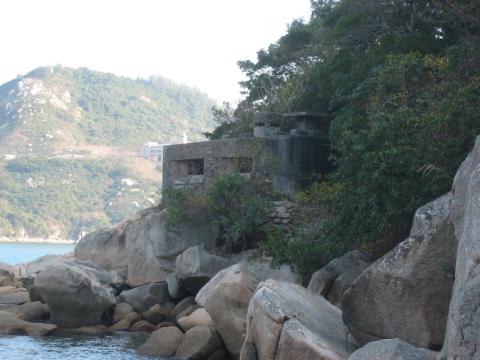 Close up, and there's no sign of the original door,  but the sturdy iron door frame is still there: 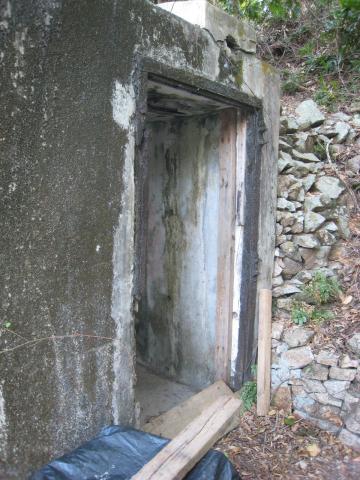 It seems the local boatmen are using this pillbox as their store room (there are several small boats moored in this bay, but no people around on the day I went) 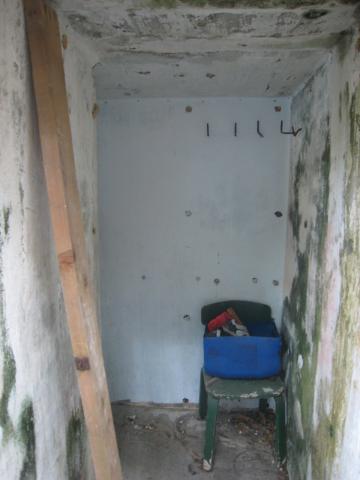 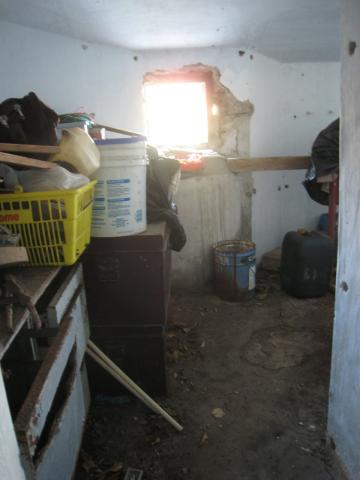 Here's the view out of the right loophole - the metal shutter still moves freely. I think the triangular metal plate at the bottom of the photo would have been the mounting plate for a machine gun. 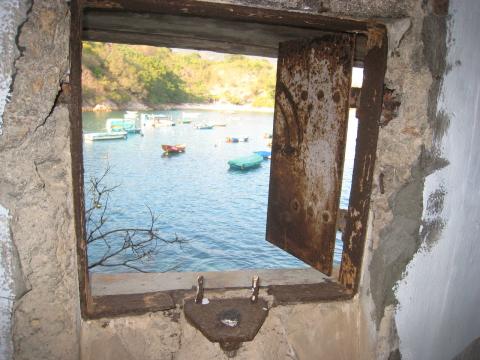 Looking out of the left loophole you can see the simple metal catch that was used to lock the shutters closed. 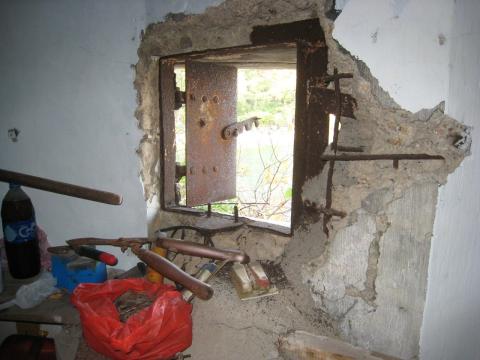 Looking back towards the entrance, there's a small tank in the corner - for water? Then just to the left of the tank you can see the round metal fitting that held the fold-down bed, and the hooks to hold the beds up when they weren't in use. 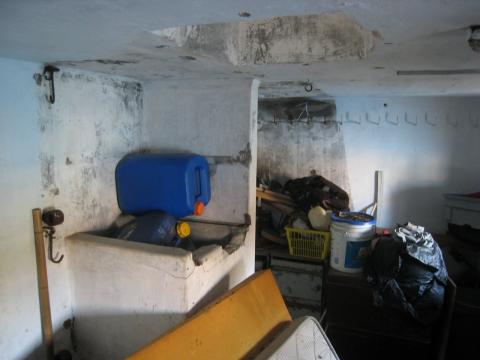 Here's the view straight up into the circular tower that held the periscope. I'm not sure if the iron bar had any purpose, or if it is just one of the reinfocing bars that was left exposed? 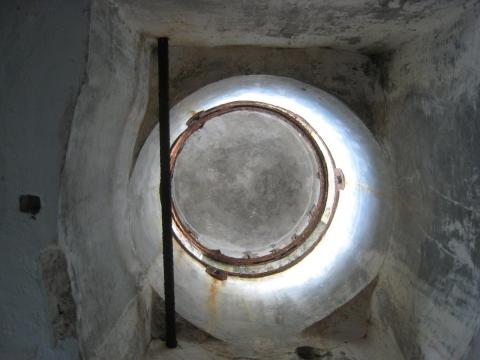 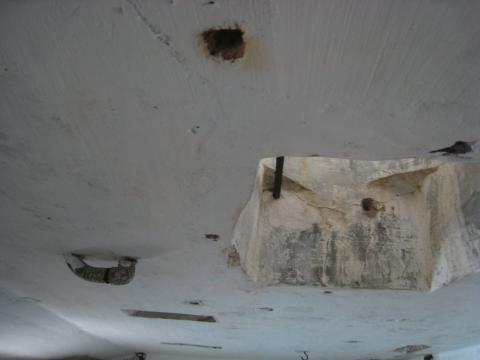 Which leads to the next question - where is the Lyon Light shelter?

I imagined it would be in a similar arrangement to PB14, just a little way up the hill behind the pillbox. If you look back to the photo of the doorway, there are no steps in sight, just a pile of rubble. Still, maybe the steps had been covered over time, so I scrambled up.

There is a clear, flat area above the pillbox. It looked like it would have been a good place to build one, but there was no sign of any Lyon Light shelter. 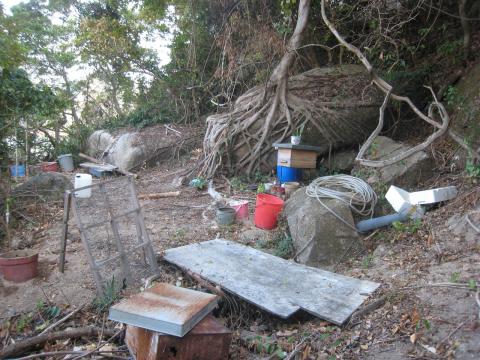 As I went back downhill I took this shot of the Pillbox roof. The square ventilation chimney at the back leads via ducts to the ventilation openings we saw in the ceiling. The ducts are the raised concrete 'fingers' stretching across the roof. It's certainly a safer system than the large square openings at Shing Mun Redoubt, which were large enough for soldiers to climb down through. 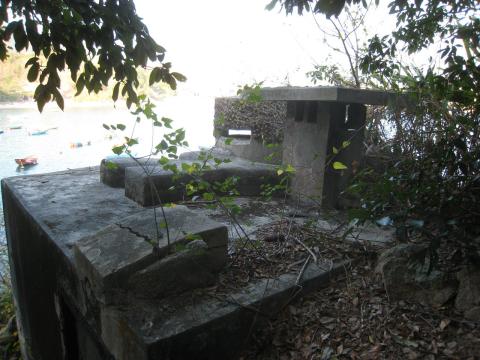 Here's the front view, with the speaking tube pipe poking out of the roof. Originally I think the roof was covered with earth, up to the level of the opening in the Periscope tower (the camouflage stone finish on that tower just extends down as far as the old soil level). 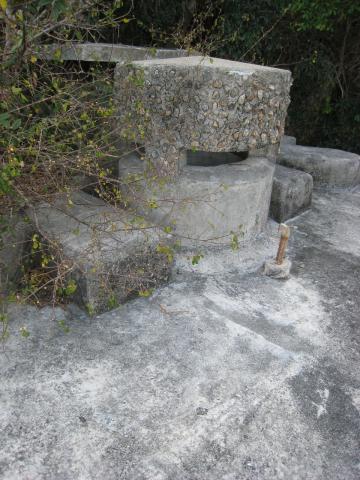 So, where is that Lyon Light? I climbed down to the rocks below the pillbox. 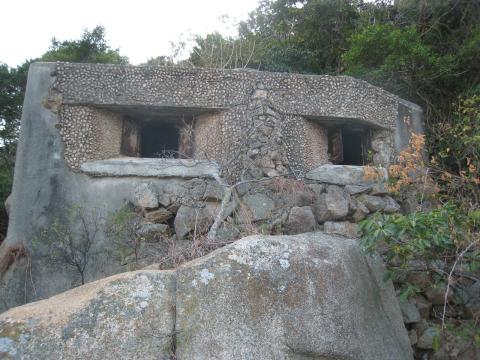 And eventually found it quite a way further around the hill. Looking back at the original photo I took, you can just make out the Lyon Light shelter once you know where to look. Look just under the red dot, and you can see the straight line of its roof (the circle marks the pillbox). 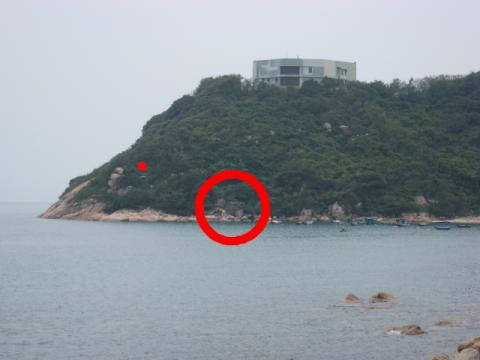 I wonder why they were so far apart? It's something to keep in mind when looking for others, that pilbox and lyon light might not be right next to each other.

Here's the view looking up from the rocks: 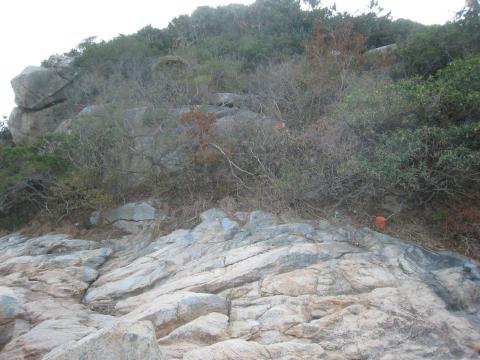 And the view from the spot where I decided I'd had enough climbing for one day, and this was close enough! This end of the pipe for the speaking tube can be seen poking out of the wall just above and to the right of the curved opening. 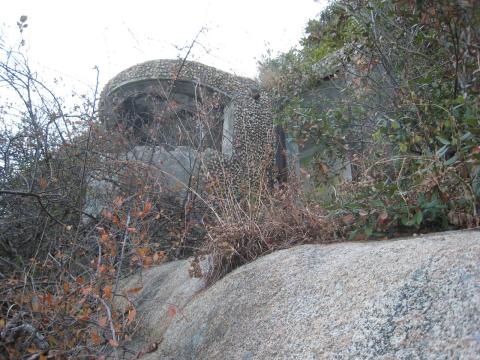 Here's the view looking out from the Lyon Light: 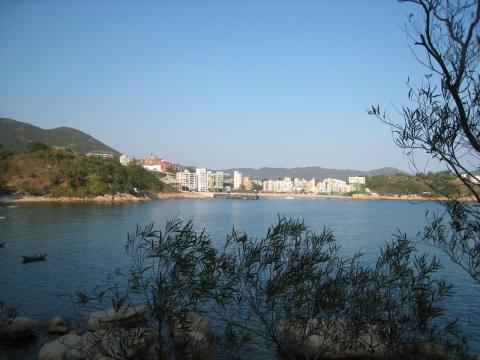 So, an interesting visit.

Tony Banham's entry for 10am on 19th December mentions this pillbox:

B Company Middlesex is ordered to retire to Stanley. The order is initially disbelieved, and then confirmed. A fresh HQ is established near PB 24 at Stanley, and the crews of 21 and 22 under Second Lieutenant King, are put into positions astride No. 1 Bungalow. The crews of 29 and 30 are put in temporary positions near the new HQ, and the crew of 23 moves back to a position on the beach.

If you know anything else about this pillbox, we'd love to hear from you.

PS To get there I walked down from the roundabout in the dip of Chung Hom Kok Road. Maps show a path leading to the pillbox. I looked but couldn't find it - I think it is long overgrown. The easiest way seems to be to walk straight down to the beach, then climb along the rocks. There were four dogs on the beach that barked at me the whole time I was in sight, and seemed to be plucking up courage for a bite - so a stick wouldn't be a bad idea. And lucklily I was there around low tide. I'm not sure if you can still scramble along the rocks at high tide, but you certainly have more options at low tide.

I originally wrote the title as "Pillbox 022, West Bay".

I've just noticed that West Bay was the old name for Chung Hom Bay on the other side of the peninsula. So it's pillbox 21 that was on West Bay.

To give an update as of May 2018, the pillbox is still in pretty amazing condition.  Despite the fact the locals are using it as a storage facility they dont seem to mind visitors entering.  There is a fireplace and the original metal windows are still there.  Regarding the lighthouse it is not in the best shape, but is still worth checking out.  The frame of the door and the hinges are in great condition along with what looks like a cooking area(noting a chimney on the roof).  Id imagine this pillbox was a distraction because there are no windows looking right so a flank from the right would be easy.

For a description of the purpose of the Pillbox/Beach Defence Unit, see https://gwulo.com/node/19582

The tide has almost stopped

The tide has almost stopped ebbing, a shower was approaching from a distance... we have only done a brief visit on its rocky coast without enough time to check the inside of the pillbox. 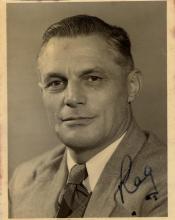