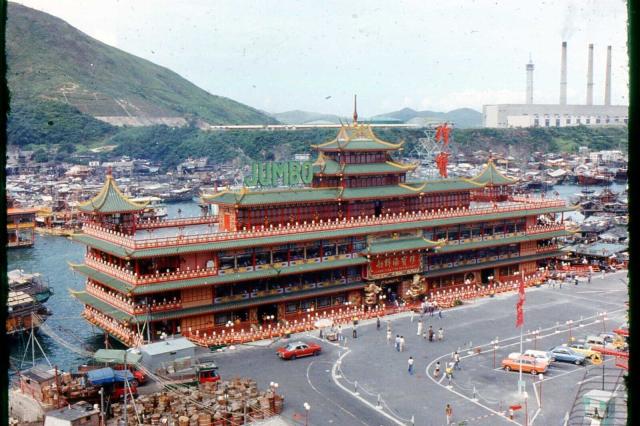 What year was it when the Jumbo Restaurant was moared directly at the pier. Where was the location of the pier ?

Re: Location of Jumbo

You can see the HKE plant on the upper right, with one of the chimnies still under construction.  That means the location should be somewhere close to the present day bus terminus.

I suspect this is the first one, before the fire.

I know the Jumbo was moored near the road circa 77/78 as a special episode of The Amazing Spider-man was filmed there around that time. (See here:https://hkmacaufilmtvlocations.blogspot.com/2016/02/spider-man-dragon-c…)

The first Jumbo had circular roofing, so this one is the second and last version.

The date can be narrowed…

The date can be narrowed further.

This second iteration of the Jumbo Restaurant in Aberdeen was moored along the reclaimed shoreline and car park from October 1976 to December 1978.

"When the restaurant was nearly completed it was gutted by fire in October 1972. It was subsequently rebuilt and opened for business in October 1976. At that time, the restaurant consisted of a floating restaurant boat, a separate kitchen barge, a fish storage barge, three bridges, a car park and pier. The restaurant boat barges and three bridges were moored alongside the reclaimed shore line whilst the car park and pier were situated on the shore with the pier forming an integral part of the car park. 'The floating restaurant boat consists of a hold and four decks. The hold houses the ballast tanks, generators, fire pumps, sprinkler room, bilge pumps, sewage tanks and air-conditioning plant room. Customers are accommodated on three of the decks whilst the top deck is used as a viewing platform. The kitchen barge and fish storage barge are secured to the floating restaurant boat. The fish storage barge has a lower deck which is used as a pump room for the fish tanks, a main deck on which fish tanks are housed and a third deck used as a staff changing/cloak room and for the storage of table linen.

3. Before the floating restaurant war relocated off-shore in December 1978, customers obtained access to the restaurant from an open air car park by means of any of the three bridges. The car park and pier were leased from the Hong Kong Government. The car park was laid out specifically for customers' vehicles and tourist coaches. It had ornamental arches in keeping with the exterior decoration of the floating restaurant. As I have said in December 1978, the restaurant with its components was relocated off shore except for the car park and pier. This resulted in the use by customers of ferries from one or other of two landing pontoons which were built exclusively to accommodate the Jumbo Restaurant shuttle ferries. Accordingly, the shore-side open air car park and pier were released back to the Government and in lieu the taxpayer erected the Jumbo Court high rise car park. The three bridges or gangways were therefore scrapped."

And here is a wonderful set of photos of Aberdeen in 1977. The 12th photo down, dated precisely 27th March 1977, showed no sign that the fourth chimney stack at the Ap Lei Chau Power Station had even begun construction yet. So the above photo, which shows the fourth stack almost 2/3 of the way up, has to be several months after that date, and most likely in the latter part of 1977.

I would even go further and say the main photo is about late November to early December 1977 given the Christmas bell shaped light decorations in the lower right hand corner of the photo.

Klaus' photo (and the photo series it came from) is dated 1977 and shows the 4th chimney stack having reached its mature height and the local Chinese people wearing long sleeved and warm clothes suggesting a winter season. It could be dated anywhere from December 1977 to March 1978 by which time the stack should be near its completion height.

Great find David. Many thanks 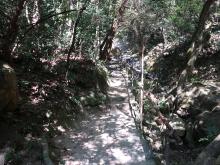