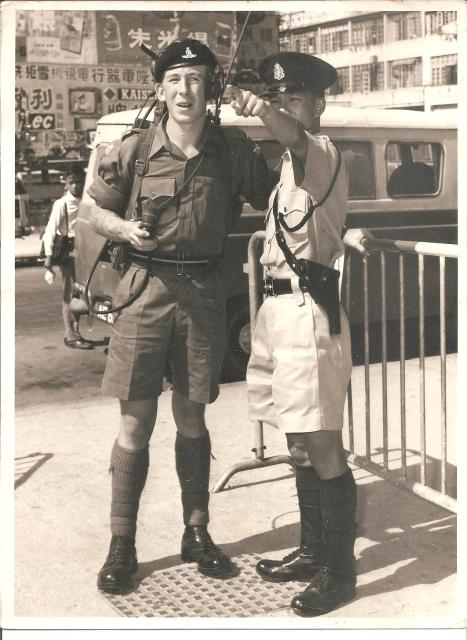 Radio looks like the Larkspur A41 VHF man-pack, which was still on issue to units until replaced by the Clansman series of radios.  I carried one in the early 80s, at the time I was in a TA (Territorial Army) Home Defense Battalion, which was very low down on the priority list for new kit - if memory serves, we didn't get the Clansman until mid 80s.  (For the weapons afficionados, we were still using the SLR long after the SA80 was in general use, THAT'S how low we were on the priority list!)

Boots look to be the leather-soled, metal studded "Ammo Boots", which were replaced with the rubber-soled DMS (Direct Moulded Sole) boot in the 70's, and were in turn replaced with the Boot Combat High (CHB) shortly after the Falklands War.

Puttees, lovely itchy woolen things, for which I never could understand why they were used, and were jettisoned with great glee once the CHBs were issued, despite the problems (squashed Achilles Tendons) that were quite wide spread with the Mk1 CHB.

The Tropical issue OD (Olive Drab), I don't know about, but the shirt definitely looks more comfortable than the KF (Khaki Flannel?) shirts (also known as Hairy Mary's!) I was issued.  Marginally more itchy than the puttees!