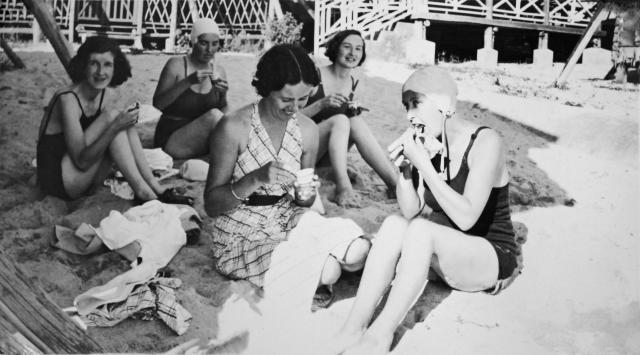 Charles Gesner van der Voort (1916-1991) was part of a group of Dutch bachelors in pre-war Shanghai. Another member of this group was David van Gelderen (1908-1990), originally from Rotterdam. He arrived in Shanghai in 1933, working for Unilever, a merger of the operations of Dutch Margarine Unie and British soap maker Lever Brothers.

The photo albums of his China years contain many photos of the bachelor life in those days: travel, work, parties, trips within China and to Japan. They also include photos of the bombing of the Unilever factory during the 1937 Japanese attack of Shanghai, membership of the French Special Police and other unique photos.

Like Charles, David was interned in Chapei Civil Assembly Centre by the Japanese from 1943 to 1945.
Being Jewish, internment in Shanghai probably saved David’s life; since all of his family members in the Netherlands were killed by the Nazis.

This photo was taken in Hong Kong, after the evacuation of Shanghai's Dutch residents following the Japanese attack in August 1937.

De Indische Courant, Monday 23 August 1937 (delpher.nl, Royal Dutch Library, translation Pieter Lommerse):
“Fled from Shanghai – the befall of the Dutch – with the “Tasman” to Hong Kong
A special correspondent of De Java-bode in Hong Kong interviewed the Dutch refugees, who arrived there Friday night with the “Tasman”, and sent his report about their befall on Saturday morning to his newspaper:
Among the passengers of the “Tasman” which arrived Friday night at 9 o’ clock from Shanghai in Hong Kong, the following passengers were with Dutch nationality: the families Buys, Driesen and Zock, Mr.: Den Hertog, Van Gelderen, Mijsberg and De Vos; and Mrs. and children: Aeyelts, Carrière, Faber, Gastmann, Van Gulik, Van Houten, Klein [Kleijn], De Lonsain, Mann, Riem, Semmelink, Van Sommeren, Van Senden, Tiernego and De Wilde.
Among the refugees, who found refuge aboard the K.P.M. ship (Koninklijke Paketvaart-Maatschappij, Royal Packet Navigation Company), were sixty Chinese from Java, who slept on deck. All refugees made a very nervous impression on the Java-bode reporter and had the mulligrubs.
Many of the persons who had fled danger in Shanghai and had left everything they owned in the city, which is now being ravaged by war. Safety was their first priority. They had embarked the K.P.M. ship – which had taken them away from the terror of bombardments – without money or luggage, with little more than a small suitcase.
According to the unadorned tale about Shanghai, the commander of the “Tasman” captain F. Prass, shortly upon arrival of the Dutch refugees in Hong Kong to the representative of the Java-bode, people had experienced hardship. The commander praised the outstanding cooperation, during the evacuation  – when his ship was in great danger of being hit by grenade fire – from the passengers.
According to the commander who continued his befall, the “Tasman” was moored along the terrain of the “Asiatic Petroleum Company” in Shanghai was bunkering, when a bombardment of the oil tanks started. However, only the asphalt of the repository caught fire, while favourable winds – lucky conditions for the K.P.M. ship – were blowing in another direction, away from the endangered ship. At a distance of only 400 meters, captain Prass saw the incendiaries falling down!
About the embarkation of the fleeing passengers, which took place, as we know, on Tuesday, the commander remarked that it went smoothly. When the refugees boarded, the K.P.M. ship was in between English warships.
During the sailing of the Whangpoo, to Woosung, at the debouchment of the river, the Japanese were bombarding the other side. While sailing away, the projectiles fell at merely a few hundred meters of the “Tasman”.
The representative of the Java-bode also informed about the experiences of the Dutch refugees. Mr Mijsberg, a real-estate agent told him that he was at the telegraph office at Nanking Road, when bombs were dropped nearby…
There was a terrible panic: people were storming the telegraph office, in order to find shelter, and kicked in the doors, in their fear and desperateness, trying to get away from the bombardment. One-hundred-and-fifty casualties, victims of the attack, were in the street….
Mr Mijsberg saw with his own eyes how a driver was hit by a sherd of a projectile fired by the antiaircraft and was killed. He was relieved to have left the scene unharmed. The mother of Mr Mijsberg, another occupant of the “Tasman”, told the correspondent how nervous the women had become because of the continuous shelling. It had been difficult to control the fear over the wellbeing of the children, especially during horrible moments when the grenades hit the water so close to the ship. Still impressed with what had happened she said: “I am relieved to have arrived in Hong Kong!”
The ship doctor of the “Tasman”, Mr. J.P. de Bats, from Batavia (Jakarta), could report – to the delight of the correspondent – that the passengers were in good health. He added that the “Tasman” could never have been the target of the shooting.
An equally dramatic story like Mr Mijsberg was told by Mr. Van Gelderen to the reporter of the Java-bode, who worked in a factory at Yangtzepoo Road. In view of the dangerous area in which the factory Is located, he was warned by the Dutch Consul, however, he chose to stay. When the Chinese started to bomb the Japanese cotton mill factory, a superintendent of the factory was injured by a sherd which hit the factory terrain. After this incident, Mr Van Gelderen, with hundreds of other refugees, moved to a safer part of the international concession.
About the measures taken for the Dutch refugees in Hong Kong, the correspondents signals that the Europeans have been billeted in hotels and with acquaintances, while the Chinese passengers mostly stayed on board. Probably many of them will travel to Java.”