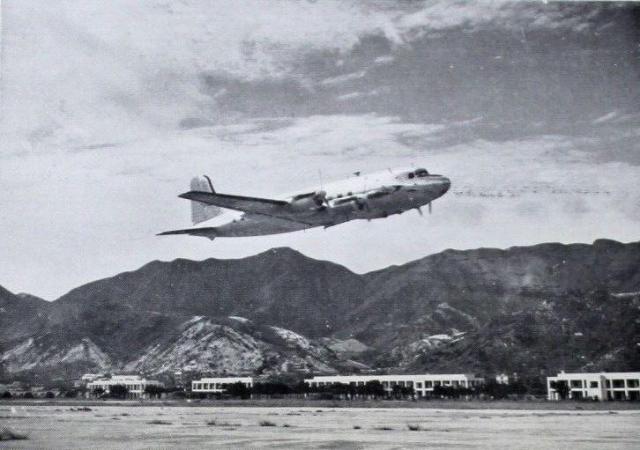 The inaugural flight left London on 23 August 1949. Was supposed to have arrived in Hong Kong on 26 August but was delayed by a day in Karachi due to mechanical problems.

The above image shows G-ALHD, Royal Mail Aircraft Ajax, commanded by Captain A.P.W. Cane, which set off from London on 14 June 1949, on a 26,000-mile proving flight over BOAC’sFar East route network. The crew comprised three Captains, two Navigators, two Radio Officers and a steward and a Stewardess. In total, there were eleven crew and thirteen technical observers. Arriving from Singapore to a wet and humid Hong Kong typical for the time of the year, the party spent three days putting Ajax through an exhausting series of take-offs and landings at varying weights on Kai Tak’s difficult short runways surrounded by mountains. The observers were off-loaded and replaced on board by ballast. They then lined the runways at intervals, marking the points of take-off, touch-down and stopping distances for later flight-planning and pilot’s documentation. A visit to Shanghai was planned, but the civil war there made this inadvisable. Tokyo was the next stop, after which was a return to cloud-shrouded Hong Kong. The return route to the UK took in Manila and Bangkok, across India and the Middle East. The proving flight was declared to be a great success with minimal issues with the aircraft.

The Argonauts were introduced onto scheduled services to the Far East on 23 August 1949, superseding BOAC’s flying boats, commencing with a weekly London-Rome-Cairo-Basra-Karachi-Calcutta-Rangoon-Bangkok-Hong Kong schedule. This was BOAC’s first all-landplane service to the Far East, and the inaugural flight was operated by G-ALHJ Arcturus. These services departed and arrived at London’s new Heathrow Airport still under construction, with temporary buildings serving for terminal services amongst the inevitable mud, and the biting cold wind that sweeps across Hounslow Heath. It was a pioneering experience compared with the Heathrow of today.

A major problem with the Canadair Argonaut airliners was found to be the excessive engine noise reaching inside the passenger cabin. This was caused by the lack of silencing on the Rolls-Royce Merlin engine’s exhaust-stacks venting directly towards the fuselage. The other user, Trans-Canada Air Lines, had developed a quieter crossover exhaust system for their similar Canadair North Stars. BOAC’s engineers then introduced these onto the Argonauts, but it did not completely cure the problem. Argonauts had a reputation as the noisiest airliners in service anywhere.

With the Argonaut fleet operations settling down and operating many services passing through very hot and humid parts of the world, the flight deck crews were experiencing problems not foreseen at BOAC’s base in cold and wet England. Unseen by their first-class passengers, the high cockpit temperatures combined with the scorching heat of the sun found on the routes in the Middle and Far East, were causing the crew’s tropical dress on the flight deck to become just vest and underpants. The rest of their sweat-sodden BOAC uniforms were hanging on coat hangers to dry out. Also, the leather covered pilot’s seats became extremely hot leading to burns and were very sweaty. ‘Cool-Ride’ covers similar to those found in cars had to be installed.

BOAC then experimented with painting the tops of the fuselages with white plastic paint and it was found that this dropped the cabin’s internal temperatures by about 5 degrees centigrade. In the spring of 1950, this scheme was adopted by the Argonaut fleet and has since become standard on airline fleets throughout the world. 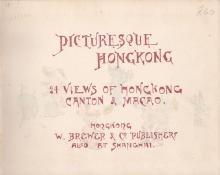