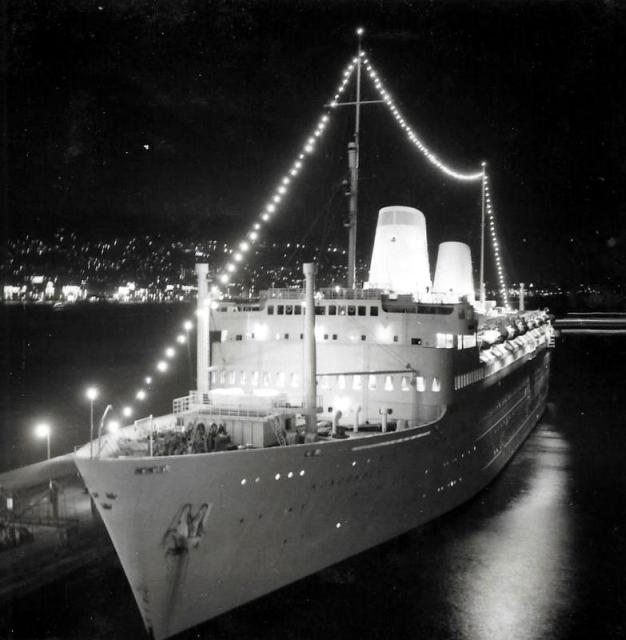 This photo of the M.V. KUNGSHOLM visiting Hong Kong on its first round the world cruise in 1955 prompted some research which uncovered an account of an excursion by two  passengers from the ship to the Aberdeen floating restaurant.

The KUNGSHOLM was built in 1953 by De Schelde NV, Vlissingen, Nederland for the Swedish America Lines (AB Svenska Amerika Linjen).

The U.S. press reported that the KUNGSHOLM was to set sail from New York on 8th. January for a ‘97 glamorous day’ world cruise to 21  'romantic ports’. Cruising in the 1950s was still the preserve of the wealthy – the cruise rates started at US$ 2,900 (US$ 30,276 today). The 400 passengers aboard would enjoy ‘ unequalled comfort in a club like atmosphere.’ with full air conditioning and all staterooms outside.’ As for the line’s cuisine, ‘ no detailed introduction is needed for the discerning traveller.’

During the liner’s brief stay in Hong Kong, recently retired Reno businessman Mr. Hugh P. Herd and his wife Hazel decided to forego the American Express tours on offer and instead set off on their own to dine at the Aberdeen floating restaurant. Their account of the excursion was featured in Gladys Rowley’s society column of the Reno Evening Gazette on June 12th.1955.

Thank you so much for finding details on this 1955  world cruise. These photos I found in an estate sale were meant to be shared on Gwulo.

Pleased you found this information useful. It's another snippet of what life was like in the past. However, some HK practices are still the same like the changeover time for taxis! 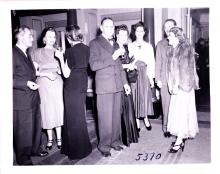