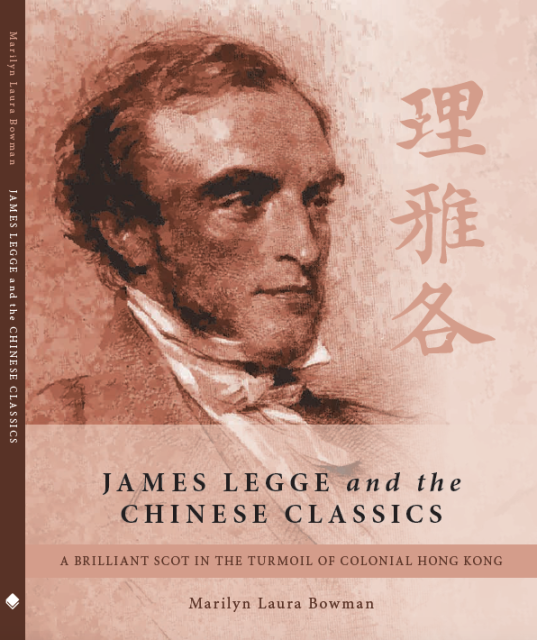 This is the front cover of my book: Bowman, Marilyn, (2016)  James Legge and the Chinese Classics:  a brilliant Scot in the turmoil of colonial Hong Kong. Friesen Press

Legge (1815-1897) was a brilliant Scot who was the first to translate all the Chinese Classics into any European language, when struggles between Britain and China included two wars. As a young man he was a prize-winning Latin scholar at Aberdeen, then King’s College.
The book will be a pleasure to those interested in 19th century Hong Kong and China, to those interested in the lives of talented Scots as they spread across the world in the 19th c. British Empire, to those interested in the complexities of mission life in 19th century China, and in those who are interested in Chinese culture and ideas as we become increasingly interdependent.
James Legge (1815-1897), was a great Scots scholar and missionary famed as a translator of the Chinese Classics when struggles between Britain and China included two wars. It was an era of sailing ships, pirates, opium wars, the swashbuckling East India Company, cannibals eating missionaries, and the opening of Qing China to trade and ideas. Legge was vilified by fundamentalist missionaries who disagreed with his favourable views about Chinese culture and beliefs. He risked beheading twice while helping Chinese individuals being terrorized during the Taiping Rebellion. He became so ill from Hong Kong fevers when only 29 that he was forced to return to the UK to save his life. Recovering, he and his three talented Chinese students attracted such interest that they were invited to a private meeting with Queen Victoria. Legge thrived despite serious illnesses, lost five of his 11 children and both wives to premature deaths, survived cholera epidemics, typhoons, and massive fires. He was poisoned twice in a famous scandal, helped save a sailing ship from fire on the high seas, took in a bohemian Qing scholar on the run, foiled a bank-bombing plot, and earned enmity in the colony for providing court testimony about translation that favoured accused Chinese men rather than the colonial authorities. Legge’s resilient responses and incredible productivity reflected the passion he had developed at the age of 23 for understanding the culture of China. He retired to become a member of Corpus Christi College and the first Professor of Chinese at Oxford.
On November 7  Corpus Christi College, Oxford gave me a wonderful book launch, hosted by President Steve Cowley and former President Sir Tim Lankester. There was great interest in the book among the scholars attending, which gratified me greatly.
My book is available in a number of formats from my publisher’s online bookstore, in hardcover, softcover, as an eBook on Kindle, and is also available through Amazon. The publisher has done a very handsome job with it.
Here is a direct link to the book, on the Friesenpress bookstore online:
James Legge and the Chinese Classics by Marilyn Laura Bowman
or search FriesenPress >Bookstore >Bowman, for the book.
A  Note about the Cover picture.
The picture was a drawing done in 1848 by George Richmond, a painter in the court of Queen Victoria. It was used to generate an engraving used in a book published in 1905, now out of copyright. The Legge family has never been able to find the original drawing, probably languishing in old family papers somewhere.  I used it as part of the book cover, along with Legge’s chop for his Chinese name, Li Ya-ge,  “Legge” for my 2016 book about Legge.  The effect was quite nice.
Date picture taken
11 Nov 2016
Tags
James Legge and the Chinese Classics; Hong Kong
Author(s)
Marilyn Bowman
Gallery
1840s Hong Kong photos
Shows person / people
James LEGGE [1815-1897] 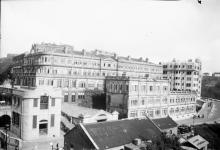