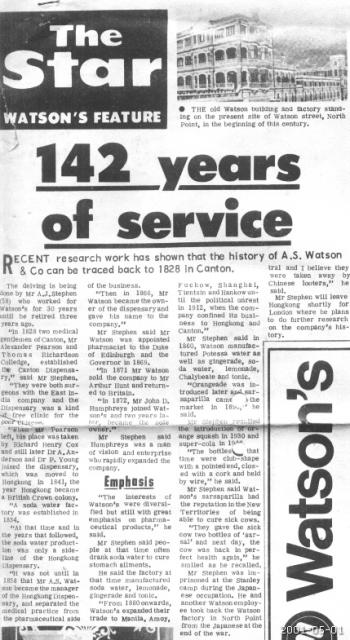 THE old Watson building and factory standing on the present site of Watson street, North Point, in tine beginning of this century.

RECENT research work has shown that the history of A.S. Watson & Co can be traced back to 1828 in Canton.

The delving Is being done by Mr A.J.Stephen (58) who worked for Watson's for 30 years until he retired three years ago.

"They were both surgeons with the East India company and the Dispensary was a kind of free clinic for the poor Chinese.

"When Mr Pearson left, his place was taken by Richard Henry Cox and still later Dr A. Anderson and Dr P. Young joined the dispensary, which was moved to Hongkong in 1841, the year Hongkong became a British Crown colony.

"A soda water factory was established in 1834.

"At that lime and in the years that followed, the soda water production was only a sideline of the Hongkong Dispensary.

"It was not until in 1858 that Mr A.S. Watson became the manager of the Hongkong Dispensary, and separated the medical practice from the pharmaceutical side of the business.

"Then in 1866, Mr Watson became the owner of the dispensary and gave his name to the company.”

Mr Stephen said Mr Watson was appointed pharmacist to the Duke of Edinburgh and the Governor in 1869.

"In 1871 Mr Watson sold the company to Mr Arthur Hunt and returned to Britain.

Mr Stephen said Humphreys was a man of vision and enterprise who rapidly expanded the company.

"The interests of Watson's were diversified but still with great emphasis on pharmaceutical products," he said.

He said the factory at that time manufactured soda water, lemonade, gingerade and tonic.

“From 1880 onwards, Watson's expanded their trade to Manila, Amoy, Fuchow, Shanghai, Tientsin and Hankow until the political unrest in 1912, when the company confined its business to Hongkong and Canton.”

"Orangeade was introduced later and sarsaparilla came to the market in 1890," he said.

"The bottles at that time were club-shape with a pointed end, closed with a cork and held by wire,” he said.

Mr Stephen recalled the introduction of orange squash in 1930 and super-cola in 194?.

"The bottles at that time were club-shape with a pointed end, closed with a cork and held by wire,” he said.

Mr Stephen said Watson's sarsaparilla had the reputation in the New Territories of being able to cure sick cows.

"They gave the sick cow two bottles of ‘sar-sal' and next day, the cow was back in perfect health again,” he smiled as he recalled.

Mr Stephen was imprisoned at the Stanley camp during the Japanese occupation. He and another Watson employee took back the Watson factory in North Point from the Japanese at the end of the war.

[???]tral and I believe they were taken away by Chinese looters,” he said.

Mr Stephen will leave Hongkong shortly for London where he plans to do further research on the company's history.